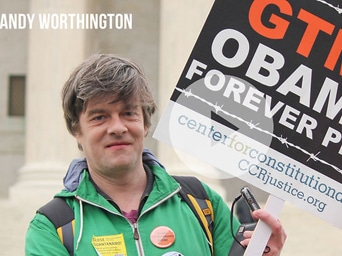 Andy Worthington is a superb reporter who has specialized in providing the facts of the US government’s illegal abuse of “detainees,” against whom no evidence exists.(www.andyworthington.co.uk) In an effort to create evidence, the US government has illegally resorted to torture. Torture produces false confessions, plea bargains, and false testimony against others in order to escape further torture.

For these reasons, in Anglo-American law self-incrimination secured through torture has been impermissible evidence for centuries. So also has been secret evidence withheld from the accused and his attorney. Secret evidence cannot be confronted. Secret evidence is distrusted as made-up in order to convict the innocent. The evidence is secret because it cannot stand the light of day.

The US government relies on secret evidence in its cases against alleged terrorists, claiming that national security would be threatened if the evidence were revealed. This is abject nonsense. It is an absurd claim that presenting evidence against a terrorist jeopardizes the national security of the United States.

To the contrary, not presenting evidence jeopardizes the security of each and every one of us. Once the government can convict defendants on the basis of secret evidence, even the concept of a fair trial will disappear. Fair trials are already history, but the concept lingers.

Secret evidence murders the concept of a fair trial. It murders justice and the rule of law. Secret evidence means anyone can be convicted of anything. As in Kafka’s The Trial, people will cease to know the crimes for which they are being tried and convicted.

This extraordinary development in Anglo-American law, a development demanded by the unaccountable Bush/Obama Regime, has not resulted in impeachment proceedings; nor has it caused an uproar from Congress, the federal courts, the presstitute media, law schools, constitutional scholars, and bar associations.

Having bought the government’s 9/11 conspiracy theory, Americans just want someone to pay. They don’t care who as long as someone pays. To accommodate this desire, the government has produced some “high value detainees” with Arab or Muslim names. But instead of bringing these alleged malefactors to trial and presenting evidence against them, the government has kept them in torture dungeons for years trying to create through the application of pain and psychological breakdown guilt by self-incrimination in order to create a case against them.

The government has been unsuccessful and has nothing that it can bring to a real court. So the Bush/Obama Regime created and recreated “military tribunals” to lend “national security” credence to the absolute need that non-existent evidence be kept secret.

Andy Worthington in his numerous reports does a good job in providing the history of the detainees and their treatment. He deserves our commendation and support. But what I want to do is to ask some questions, not of Worthington, but about the idea that the US is under terrorist threat.

By this September, 9/11 will be eleven years ago. Yet despite the War on Terror, the loss of Americans’ privacy and civil liberties, an expenditure of trillions of dollars on numerous wars, violations of US and international laws against torture, and so forth, no one has been held accountable. Neither the perpetrators nor those whom the perpetrators outwitted, assuming that they are different people, have been held accountable. Going on 11 years and no trials of villains or chastisement of negligent public officials. This is remarkable.

The government’s account of 9/11 implies massive failure of all US security and intelligence agencies along with those of our NATO puppets and Israel’s Mossad. The government’s official line also implies the failure of the National Security Council, NORAD and the US Air Force, Air Traffic Control, Airport Security four times in one hour on the same morning. It implies the failure of the President, the Vice President, the National Security Adviser, the Secretary of Defense.

Many on the left and also libertarians find this apparent failure of the centralized and oppressive government so hopeful that they cling to the official “government failure” explanation of 9/11. However, such massive failure is simply unbelievable. How in the world could the US have survived the cold war with the Soviets if the US government were so totally incompetent?

If we attribute superhero powers to the 19 alleged hijackers, powers in excess of V’s in V for Vendetta or James Bond’s or Captain Marvel’s, and assume that these young terrorists, primarily Saudi Arabians, outwitted Dick Cheney, Condi Rice, The Joint Chiefs of Staff, and Tony Blair, along with the CIA, FBI, MI5 and MI6, Mossad, etc., one would have expected for the President, Congress, and the media to call for heads to roll. No more humiliating affront has ever been suffered by a major power than the US suffered on 9/11. Yet, absolutely no one, not even some lowly traffic controller, was scapegoated and held accountable for what is considered to be the most extraordinarily successful terrorist attack in human history, an attack so successful that it implies total negligence across the totality of the US government and that of all its allies.

This just doesn’t smell right. Total failure and no accountability. The most expensively funded security apparatus the world has ever known defeated by a handful of Saudi Arabians. How can anyone in the CIA, FBI, NSA, NORAD, and National Security Council hold up their heads? What a disgraced bunch of jerks and incompetents. What do we need them for?

How did 19 passengers get on airplanes in the US without being on the passenger lists?

Researchers have found contradictions in the FBI’s accounts of the passenger lists with the FBI adding and subtracting names from its various lists and some names being misspelled, indicating possibly that the FBI doesn’t really know who the person is. The authenticity of the passenger lists that were finally released in 2005 is contested, and the list apparently was not presented as evidence by the FBI in the Moussaoui trial in 2006. David Ray Griffin has extensively researched the 9/11 story. In one of his books, 9/11 Ten Years Later, Griffin writes: “Although the FBI claimed that it had received flight manifests from the airlines by the morning of 9/11, the ‘manifests’ that appeared in 2005 had names that were not known to the FBI until a day or more after 9/11. These 2005 ‘manifests,’ therefore, could not have been the original manifests for the four 9/11 flights.”

The airlines themselves have not been forthcoming. We are left with the mystery of why simple and straightforward evidence, such as a list of passengers, was withheld for years and mired in secrecy and controversy.

We have the additional problem that the BBC and subsequently other news organizations established that 6 or 7 of the alleged hijackers on the FBI’s list are alive and well and have never been part of any terrorist plot.

These points are not even a beginning of the voluminous reasons that the government’s 9/11 story looks very thin.

But the American public, being throughly plugged into the Matrix, are not suspicious of the government’s thin story. Instead, they are suspicious of the facts and of those experts who are suspicious of the government’s story. Architects, engineers, scientists, first responders, pilots, and former public officials who raise objections to the official story are written off as conspiracy theorists. Why does an ignorant American public think it knows more than experts? Why do Americans believe a government that told them the intentional lie that Saddam Hussein had weapons of mass destruction despite the fact that the weapons inspectors reported to President Bush that Hussein had no such weapons? And now we see the same thing all over again with the alleged, but non-existent, Iranian nukes.

As Frantz Fanon wrote, the power of cognitive dissonance is extreme. It keeps people comfortable and safe from threatening information. Most Americans find the government’s lies preferable to the truth. They don’t want to be unplugged from the Matrix. The truth is too uncomfortable for emotionally and mentally weak Americans.

Worthington focuses on the harm being done to detainees. They have been abused for much of their lives. Their innocence or guilt cannot be established because the evidence is compromised by torture, self-incrimination, and coerced testimony against others. They stand convicted by the government’s accusation alone. These are real wrongs, and Worthington is correct to emphasize them.

As the adage goes, a fish rots from the head. As the government rots, so does the United States of America.

PAUL CRAIG ROBERTS has had careers in scholarship and academia, public service, and journalism. He served as Congressional staff and as Assistant Secretary of the Treasury in the Reagan Administration. He can be reached at: www.paulcraigroberts.org