Home Veterans We Need to Calm Down! It’s Information Overload 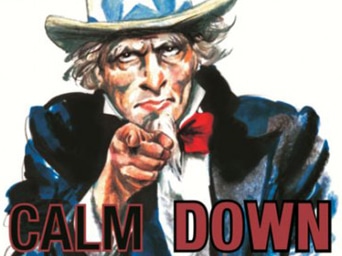 The rant by Gordon Duff May 3, cobbled together most of the standard objections to institutional religion during the previous 18 centuries and surely did what the headline promised—“Ain’t nobody gonna Like this.”

I like our fearless leader, and credit his writing for the growth and success of VT. And, like most of you regulars, I get my shorts in a snarl much of the time when he lets his ‘progressive’ habit show and tries to make our MKultra president what he ain’t.

If I were paid to write, and needed production numbers (words) I could build a career using the comments to Duff’s stuff—you guys and gals are pretty good.

But, I’m a lone nut, on a mission and I generally write from experience and from the heart, which has been broken by the behaviors of my beloved homeland over the past 76 years.

I am unabashed in my faith in the tenets of Jesus Christ, and I came from a background of free wheeling agnosticism with plenty of disrespect for “churchists” of every stripe.

However it is a mistake to think everything in history is a rotten lie—plenty of good minds have struggled with the problems in discovering what is true about the question we have to ask as soon as we reach an age of thought.

What and why are we?

If you have not seriously wrestled with that basic question, you probably have no place in most VT dialogues.
The two most important days in your life are the day you are born, and the day you find out why—Mark Twain.

Who and how developed the tales, fables, and legends of “holy writ” will never be known to us. So what does that leave?

We can say that rejection of all of it is the most “logical” thing to do and join in Duff’s rant. History deserves such scorn as does human psychology. Scorn and ridicule may provide a kind of pressure valve outlet, but no satisfaction whatsoever.

Saul/Paul of the Acts legend, may be entirely made up fiction, or a real person—and the writers of the gospel may never be “authenticated” to anyone’s satisfaction—nevertheless, the words we read and study which are attributed to them are absolutely real, or we could never have had so many people read and study them.

How is that intelligently ignored?

How do you ignore the statement attributed to Paul? “Faith is the substance of things hoped for; the evidence for things not seen.”

I know that line by heart because it is faith and faith alone that is the rock upon which Jesus built his church. My reading of the questionable gospels in those often challenged Bible versions made that clear to me early in my journey into scripture—thus, I rejected the claim for Papal Rome at the outset. My choice—readily defended—since the Roman Catholic Church began as a political institution more than anything else.

This fact of institutionalization cannot negate the outstanding writings of many sincere church philosophers and leaders. My favorite was John Chrysostrom, who saw the evils of Judaizers early on.

So What? You say. Well, my search was and is a search for truth; politics and joining in for the sake of getting along, be damned.

Yes, Gordon, you dared to speak the truth of Mohammed’s seminal work—he expanded Torah writing and rendered unto Jesus what Jesus had earned. Allah, the creator of everything had two prophets, but no partners.

If people could screw up Christ’s tenets so badly, imagine what they could do with tenets from two prophets of peace. We don’t have to imagine, do we?

I think its really obvious that people, above all else, want comfort. We go to extraordinary efforts to attain comfort—everything from stealing things, even killing others for goods, to taking mind-numbing drugs and drink. Many seek creature comfort from emotions felt by rapturous expressions of religious fervor. Never my cup of tea, but the reason so many blindly follow nonsensical religion.

This topic is way to big for a column, but you started it Gordon. We both write to provoke thinking in others; you surely succeeded.

I want very much to try tackling the issue of Creation v. Darwinism one of these days. The next graph closes me out today. Where does it fit in the argument about the “lies” of Christianity?

Note. “Logos” may be defined as the Christ Principle, or the rule of law in a divinely ordered universe. Thus the Logos would seem to be an intrinsic feature of all the great world religions with the notable exception of Judaism—especially in its bizarre Talmudic manifestation.