Home World How Nuclear Can Israel Be? 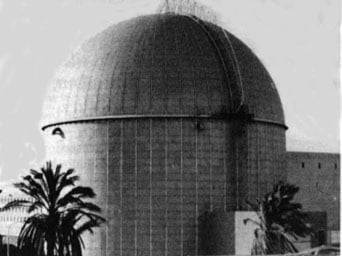 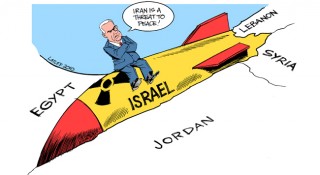 Imagine a world plunged in darkness and extreme cold with the sunlight screened off by a thick pall of dust cloud. Imagine a world flung back into chaos. This is an image conceived of a world abandoned to dereliction by doomsday weapons.

According to Samson Option theory, Israel reserves the option to retaliate massively with nuclear weapons when its existence is gravely endangered by the military might of another country although the regime refuses to admit to the possession of a huge nuclear arsenal. As a first sign of a nuclear threat, in the 1973 Yom Kippur (the Day of Atonement) War considered to be the fiercest Arab-Israeli conflict, when Arab forces were about to defeat Israeli forces, the Zionist Prime Minister Golda Meir ordered that 13 nuclear bombs be readied to be used either by missiles or by aircraft. And President Nixon agreed to the Israeli demand. In fact, the Samson Option is a horrific plan drawn up by Israel leaders to take down the Middle East and the entire world if necessary and proclaimed ‘kosher’. Pulitzer Prize-winning author Seymour M. Hersh hypothesized that “Should war break out in the Middle East again and should the Syrians and the Egyptians break through again as they did in 1973 [Yom Kippur War], or should any Arab nation fire missiles again at Israel, as Iraq did [in the 1991 Gulf War], a nuclear escalation, once unthinkable except as a last resort, would now be a strong possibility.”

Israel test-fired a missile on November 2, 2011 which it said was capable of carrying a nuclear warhead and targeting any part of the Middle East including Iran.

Israeli officials maintain that the nuclear-capable missile can hit any target within the range of 10,000 kilometers. In other words, it can hit even Russia, China or any part in Europe.

It is now public knowledge that Tel Aviv is a powerful nuclear regime which has at its disposal a huge arsenal surmised to accommodate 300 to 400  nuclear warheads. Israelis have long been mum on the issue and still decline to acknowledge the existence of this nuclear arsenal.

In his revealing book “The Samson Option” (1991), Seymour Hersh argues that the idea of producing nuclear weapons was initially articulated by Israeli military leader Moshe Dayan in early 1968. Since then, Israel began to produce three to five bombs a year. After all, Israel started its illegal nuclear activities back in 1950 in Dimona, an Israeli city in the Negev desert, as it was geographically ideal for such clandestine activities. If we take Hersh’s words for granted, Israel is expected to possess more than 200 nuclear bombs by now.  The Zionist regime inked an agreement with France early in the sixties and received required materials for commencing a nuclear weapons program including a reactor, a factory for extracting plutonium and the design. The French helped build an underground plutonium processing facility for Israel in 1962 which was completed 1965. The Israeli kept tight security in and around the perimeter of the nuclear facility and in 1973 they shot down a passenger Libyan plane flying in the vicinity and killed 104 passengers. The regime was reportedly ranked sixth in producing nuclear bombs in the sixties. Other required materials such as uranium and heavy water were also provided by Norway, France, and the United States.

An operation codenamed Plumbat was jointly carried out by Mossad and LAKAM (An intelligence-gathering agency of Israel’s Defense Ministry for stealing technology for Dimona.) in spearheading the Israeli nuclear weapons efforts. A German freighter with a cargo of 200 tons of uranium oxide suddenly disappeared. When it was found in a Turkish port, the cargo was gone. Later, it became obvious that it had been transferred to an Israeli ship thanks to the joint efforts of Mossad and LAKAM.

Before Seymour Hersh shed light on the nightmarish aspects of the Israeli nuclear bombs, it was Mordechai Vanunu, a former technician at Dimona who brought Israel’s nuclear weapons program to the attention of international community. In 1986, Mordechai Vanunu, a leftist supporter of Palestinian rights, smuggled dozens of pictures and documents out of Dimona and gave them to the London Sunday Times. The pictures and documents proved that Israel was in possession of a sizeable nuclear arsenal i.e. as many as 200 highly sophisticated thermonuclear bombs. The documents also revealed that the Dimona’s capacity had increased drastically over the years and that Israel was producing 1.2 kilograms of plutonium on a weekly basis, enough to make 10 to 12 bombs per year. However, Vanunu paid the price for these disclosures and spent 18 years in prison including 11 years in solitary confinement.

Israel follows a policy of nuclear opacity. In other words, the regime is advised not to acknowledge or deny the possession of nuclear weapons. Mum is the word in Israeli nuclear policy. In a secret meeting in 1968 between Israeli Prime Minister Golda Meir and US President Richard Nixon, the two parties came to the agreement that as long as Israel refused to declare the possession of nukes publicly or test them, the United States would endure and screen the regime’s nuclear program. This has ever since become an indispensable part of US-Israeli policy. However, in 2006, incoming US Defense Secretary Robert Gates told a senate committee in a momentary lapse of reason (?) that Israel has nuclear weapons.

This has actually changed nothing concerning Israel’s nuclear program over the years and Washington’s officials have voiced their constant support for Israel and its security. In July, 2011, US President Barack Obama even reassured Israeli Prime Minister Benjamin Netanyahu of Washington’s unreserved support for the regime, “We strongly believe that, given its size, its history, the region that it’s in . . . Israel has unique security requirements. It’s got to be able to respond to threats. . . . And the United States will never ask Israel to take any steps that would undermine [its] security interests.”

The story of Israel’s nuclear weapons program is a painfully sad one and the fact that some European countries secretly catapulted this regime into a nuclear nightmare is a shame. However, it is more than a shame when one contemplates that during all these years the US has been aware of these clandestine illegal activities and even supported them.

The worst is yet to come.

With over 300 to 400 nuclear bombs, Israel has been translated into an image of apocalyptic horror for the entire Middle East if not for the world.