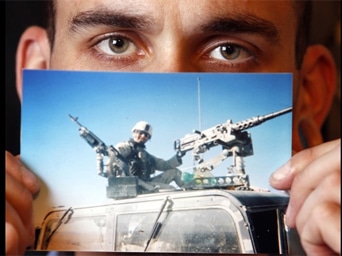 Army Staff Sgt. Ryan Miller knew that deserting his post was a serious crime. But, by then, he had a lot more on his mind and heart than his job.

Back in 2003-2004, while Miller was deployed as a cavalry scout in Afghanistan, his father died, his mother was diagnosed with cancer, and he was facing divorce. During his second tour, this time in Iraq, his best friend was killed by a roadside bomb.

A few months before his November 2007 serve-out date, while stationed at Fort Drum, N.Y., Miller learned that he had been “Stop-Loss’d” — meaning he would remain with his unit for a third deployment. He walked away twice, for a total of 19 months.

At his court-martial two years ago, Miller testified that he knew he was likely suffering from post-traumatic stress disorder, but purposely avoided treatment “in fear that I would be labeled a ‘nut’ and no longer be respected by my peers or subordinates.”

When it came time for sentencing, the prosecutor, Capt. Christopher Goren, argued that Miller should be made an example.

“If we allow Staff Sgt. Miller to get off easy, what kind of message will that send?” he asked the judge. “It would tell all those soldiers, lower soldiers, it is OK to go AWOL, which it is not.”

Goren asked that Miller be sentenced to seven months’ confinement, reduction in rank to the lowest enlisted grade and a bad-conduct discharge — which would have cut him off from the medical and mental-health benefits usually available to veterans.

But Col. Michael Hargis, the presiding officer, recommended that all but the demotion be suspended, on the condition that Miller undergo treatment and counseling.

Maj. Gen. James L. Terry, then commander of the 10th Mountain Division, went along with the recommendation. Miller successfully completed his treatment and was granted an honorable discharge.

In the world of military justice, Miller’s case is far from the rule. But some voices within that system are calling for change, saying military courts can learn from the recent experience of their civilian counterparts.

Civilian courts across the country have acknowledged the fact that, after a decade of fighting in Afghanistan and Iraq, some veterans’ crimes can be traced back to battle-zone trauma — and that they shouldn’t go to jail or prison for them. The same consideration should be given by the military legal system when damaged warriors come before it, say some military law authorities, including Maj. Evan Seamone.

Too many service members, he argues, are cast out for crimes or misconduct that could be attributable to post-traumatic stress disorder, traumatic brain injury or some other service-connected ailment. Such “punitive discharges” yank away the veteran’s safety net, passing the burden and risks on to the civilian system, he says.

“In its philosophy and practice, the military justice system is masking a major consequence of its sentencing procedures, which civilian courts have learned over the last two decades: Incarceration without adequate mental treatment leads to repeat offenses at a rate so alarming and harmful to society that it has created a ‘national public health crisis’ of ‘epidemic’ proportion,” Seamone writes.

“In contrast to problem-solving courts, which target the illness underlying criminal conduct, courts-martial function as problem-generating courts when they result in punitive discharges that preclude mentally ill offenders from obtaining” treatment through the Veterans Administration, writes Seamone. “Such practices create a class of individuals whose untreated conditions endanger public safety and the veteran as they grow worse over time.”

As awareness of PTSD, TBI and other “invisible wounds” of war has increased in the past several years, civilian courts have responded by setting up diversion programs to get eligible veterans into treatment, rather than locking them up. Seamone says nearly 100 of these so-called “veterans courts” have already been established, and another 100 or so are in the works.

But unlike these courts, Seamone writes, “military justice operates within a far smaller constellation dominated by the concept of ‘good order and discipline.’”

“The lack of concern for treatment is troublesome because of its inherent assumption that somebody else, outside of the military, will someday be responsible for dealing with aggravated psychological problems,” he writes.

In an interview with The Associated Press, Seamone said he found numerous cases in which military prosecutors “actually made the argument in courts-martial that the military isn’t a rehabilitation center.”

“The major consideration becomes … how to use the person as an example, as potentially a deterrent,” says the soldier, who has worked as both prosecutor and defender in courts-martial.

Command control is a key difference between military justice and civilian, Seamone says. “The commander is ultimately the final authority on … how the person should be dealt with.”

The presiding officer and panel members — the equivalent of judge and jury — cannot give a sentence that includes probation, he says. The commanding officer has the power to grant clemency, but Seamone says such decisions are often made during hasty meetings amid the myriad other responsibilities of running a military installation.

“I don’t think it’s intentional,” Seamone says. “A lot of the time, it becomes this problem of, ‘It’s not an issue that I can deal with right now myself. It’s going to be something later on down the line that someone else will have to deal with.’”

Seamone cites studies estimating that around 20 percent of the veterans in custody or going through the criminal courts are not eligible for VA benefits “because of the nature of the discharge that they received.” These people, he said, have been “essentially crippled.”

“And that population has much more challenges in just getting out and being successful once they’re released,” he says.

The suspended discharge is permitted in the Manual for Courts-Martial, Seamone writes, and despite “generations of nonuse” it has occasionally been used, his research revealed. Miller’s is one of the cases he cites.

“What this Miller case tells me is there IS a rehabilitative ethic” in the military, Seamone said in the telephone interview. “That people DO want to do the right thing. Commanders DO want more options than just kicking someone out and having this discharge stay with them for the rest of their lives.”

“It really doesn’t generally rise to the legal definition of insanity,” says Huffman, now dean emeritus of the law school at Texas Tech University. “So there’s no way to account for it in the guilt or innocence phase of the trial.”

Derek Richardson, a Marine combat veteran and third-year law student under Huffman, makes many of the same suggestions in a paper he’s drafting. But he would take things even farther than Seamone.

Seamone’s proposals are aimed primarily at people who are leaving the service. Richardson, a former corporal who fought in the battle of Fallujah in late 2004, says the military “has an interest in treating its servicemembers in order to restore them to full usefulness.”

“When PTSD is acquired through service, and combat caused PTSD increases aggression, drug abuse, and violence,” he argues, “the most basic concepts of justice require the military to effectively treat PTSD rather than punish it.”

Studies have found that veterans with PTSD are more likely to have problems with drugs and alcohol, and are two to three times more likely to abuse their domestic partners, Richardson says.

But while Richardson proposes creating a “mental health court” within the military justice system, Seamone would rely on agreements to use the parallel structures already in place in the civilian world.

In recent years, the rules have been liberalized to allow the VA to cover treatment for offenders who are still on active duty, Seamone says. He cites an instance in Buffalo, N.Y., in which federal authorities allowed a veteran’s case to go through the state’s deferred-adjudication program.

“So the involvement of the VA is changing the dynamic and allowing the court to build in a method to dismiss the sentence after someone successfully completes a program,” he says. “We don’t have to change the law in order to make these proposals go into effect. My major position here is that it’s really a change in attitude, rather than the law that will enable this to happen.”

Both men agree that not everyone with PTSD or TBI should automatically qualify for this alternate course. Seamone mentions the case of Army Staff Sgt. Robert Bales, accused of gunning down 17 Afghan villagers in March.

“There may be some offenders who need treatment, but their crimes are just so egregious that they NEED to go to jail,” Seamone says.

The Department of Defense has come under fire in recent years for allegedly discharging service members in such a way that they would not qualify for VA benefits. According to a report released in March by Vietnam Veterans of America, records show that the military separated more than 31,000 personnel for alleged personality disorders between 2001 and 2010.

Still, not everyone in the military accepts the need to refocus military justice.

“No! Absolutely NO!” Donald Zlotnik, a highly decorated former special forces soldier and Vietnam veteran, wrote to Army Times after it ran an article on Seamone’s paper. “If we open the mental health game to military courts no one will ever be punished and military discipline will be shattered.”

But Miller, for one, is glad his commander chose the other path.

The 30-year-old Binghamton, N.Y., man left the Army in December 2010. He and his longtime girlfriend have a 3-month-old son.

Miller used some of his veteran benefits to study for a commercial driver’s license and now has a steady job, driving a delivery truck for a local beer distributor.

He is grateful that his commander, Gen. Terry, accepted the military judge’s recommendation and “allowed me to get the counseling and therapy I needed,” Miller told the AP in an email.

If not, he added, “I honestly dont know how my life would be right now.”

Allen G. Breed is a national writer, based in Raleigh, N.C. He can be reached at features(at)ap.org.