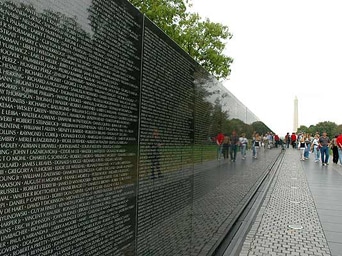 Secretary of Defense Leon E. Panetta will host a ceremony on Monday, May 28, 2012, at the Vietnam Veterans Memorial on the National Mall in Washington, D.C., to thank and honor America’s Vietnam Veterans on behalf of a grateful nation.  This ceremony will serve as a public kickoff of efforts to partner with communities across the United States.  Invited guests include thousands of Vietnam Veterans, their loved ones, Gold Star families and leadership from the military services, Cabinet and Congress.  There will be a limited viewing area open to the general public.

The Memorial Day ceremony marks the beginning of the national commemoration of the Vietnam War’s 50th anniversary program and is a joint effort between the Vietnam Veterans Memorial Fund, the National Park Service and the Department of Defense.  The event will include remarks, a moment of silence, music and ceremonial elementsthat will begin at 1 p.m. EDT.  The Chairman of the Joint Chiefs of Staff, General Martin Dempsey, Secretary of Defense and Senator Chuck Hagel, a Vietnam Veteran, and other dignitaries are scheduled to speak.

Due to space limitations, the event is open to a limited number of registered correspondents with pooled TV and still photographers.  Correspondents wanting to cover this event must RSVP by email to [email protected] by noon Wednesday, May 23 to receive set instructions.  Registration will be confirmed by e-mail and badges will be issued at the media check-in desk on Monday, May 28, 2012 at the Vietnam Veterans Memorial.

For more information on the Vietnam War Commemoration, please call 877-387-9951 or visit the official website at http://www.vietnamwar50th.com .