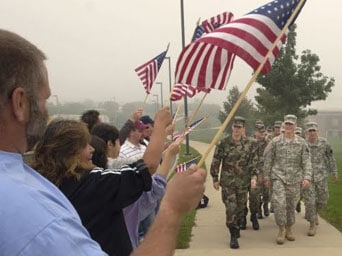 Armed Forces Day was created in 1949 to honor Americans serving in the 5 branches of the U.S. military.  Then in 1962 President Kennedy designated the 3rd Saturday of May to recognize Armed Forces Day as an official holiday.

Since it is the everyday people whose sons and daughters are sent off to war, our nation’s founding fathers made sure that the power to make war and end war rested in the hands of we the people and with that power it is we the people who bear the responsibility for their fate.  Thus a covenant has been made between the American people and those Americans serving in our Armed Forces.

Our Constitution first requires a Declaration of War, as voted on by the people’s representatives in Congress, before engaging in war.  The Constitution also put the power of the purse into the hands of the people, whereas for a war to continue the funding for it must be approved by a vote of the people’s representatives in Congress.  Americans need to understand that it is the U.S. Constitution, to which our service men and women make their oath to support and defend … with their lives if need be … against all enemies foreign and domestic, which provides for we the people to be the “deciders” and not the President or members of the military itself.

As we honor our service men and women this Armed Forces Day 2012, let us take time to remember the covenant we have with them and carefully consider these very important words concerning our freedoms from the “Father of the Constitution” himself, James Madison:

“Of all the enemies to public liberty war is, perhaps, the most to be dreaded, because it comprises and develops the germ of every other. War is the parent of armies; from these proceed debts and taxes; and armies, and debts, and taxes are the known instruments for bringing the many under the domination of the few. … No nation could preserve its freedom in the midst of continual warfare.”

Veterans For Peace Statement of Purpose:

We, having dutifully served our nation, do hereby affirm our greater responsibility to serve the cause of world peace. To this end we will work, with others

To achieve these goals, members of Veterans For Peace pledge to use non-violent means and to maintain an organization that is both democratic and open with the understanding that all members are trusted to act in the best interests of the group for the larger purpose of world peace.

Note: The Central Florida chapter of Veterans For Peace covers from the Greater Orlando area, east to the Greater Melbourne area, and north to the Greater Jacksonville area. We urge all people, veterans and non-veterans alike, who share our vision to join us. Write us at [email protected], call us at (386) 788-2918, or visit our website at www.cflveteransforpeace.org to find out about joining us and/or what you can do to help.