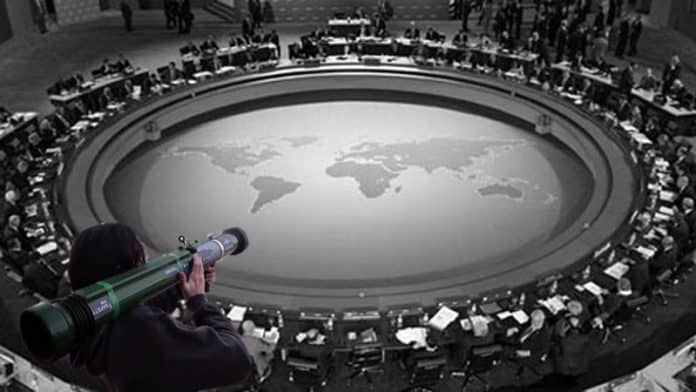 After the Cold War was over, Ramses I, or as some call him, U.S. President George Herbert Walker Bush, confided, back in the early 90s, that with no other superpower to challenge what would the US do for its Military Industrial Complex?  No challengers mean no wars means no business for his assigns!

It was a genuine moment of concern by a leading member of the global cabal.  That was in the early 90s and twenty-plus years later we have our answer;  which is that they now make up fake wars and fake enemies to fill the new demand with weapons, defense projects, etc… to keep it all going.  This is big business by true psychotic predators. 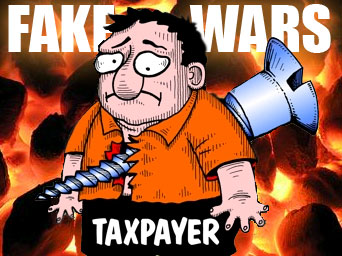 Sadly for us, the peoples of the world, this truly mentally disturbed condition is a severe disease caused by our global Monetary Economic System that puts man against man in the never-ending pursuit of greed where the haves dominate the have-nots.  And it’s not working anymore!

So far, this Adam Smith John Locke system has served humanity somewhat well but with over 2 billion of us in starvation mode with challenges like finding basic housing, it’s simply not working and has no repair button to push to make it all better.  In short, it’s reached its pinnacle of success and the highest point of effectiveness.  And now it must go!

You see when leaders are so hell-bent on perpetuating the establishment that they are willing to be accomplices to the greed by creating fake wars and making up enemies where there are none, it’s time to call it a day.  While we can’t cure them as individuals, we can send them to the hospital for therapy.  Who knows maybe we can turn them back into humans.

Anyways, these politicians are simply following their money backers and have NO choice but to prostitute themselves to fill the wants of the elite or they face a loss of their job.  And so they keep on going on TV and making up enemies and working to brainwash the general public into believing the USA is under threat.

Flash News!  The USA is NOT under any threats, period!  This is all created hyperbolic non-cents. The globalists that run the USA and make it their very own personal farm for funding and perpetuating war are the number one threat to all mankind.  They are in fact, the real terrorists.

Why?  Because they know that they are the stewards of this Monetary Economic System and have NO desire to replace it with any other system because it works for them.  And if it works for them, then it’s all good.  Who cares if billions suffer under its flawed design?  It matters not when the elite can have a feast on the bones of the people that fund through their wage slave labor workmanship.

You see virtually every country in the world is working under the Monetary Economic System.  Yes! Communists, fascists, socialists, free-enterprise…etc… all working under the same exact system.  And so they are all in it together.

In short, there is NO incentive for another country to attack another because they are all part of the same country;  the undeclared global country where globalists are all on the same team.  So attacking one another makes no cents anymore.  What does make cents is to perpetuate fake wars so that they can continue to control the global resources by enslaving the people.  That is the real game folks and we’re all pawns on their chess board getting sacrificed when needed. And it totally sucks!

Can somebody call in Jacque Fresco?  We need a Super Hero Avenger to come in, save the day, and declare this shit has gotta go!