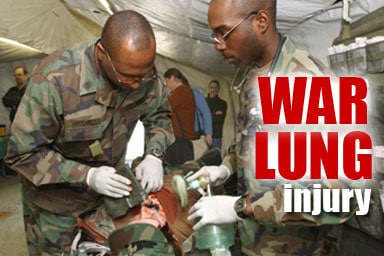 United States military personnel and civilian contractors deployed to Iraq and Afghanistan may be at risk for respiratory symptoms and chronic lung disease, including asthma and constrictive bronchiolitis. Respiratory therapists can play an important role in ensuring that patients who have respiratory symptoms following deployment are provided with appropriate referral and high-quality lung function testing as part of their diagnostic evaluation.

Since 2001, approximately 2 million US military men and women have deployed to Iraq or Afghanistan in support of OIF (Operation Iraqi Freedom) or OEF (Operation Enduring Freedom), respectively. Over the past decade, evidence has emerged that military personnel and civilian workers sent to southwest Asia may be at risk for developing potentially disabling chronic lung diseases, including asthma and constrictive bronchiolitis (CB).1,2 Specific environmental inhalation exposures of concern include ambient desert dusts, emissions from burn pits where waste products are incinerated, industrial pollutants, secondhand smoke, and airborne contaminants associated with degraded soils.

Reports of increased acute respiratory illnesses in deployed troops began surfacing in 2004.3 Subsequent epidemiologic studies showed that deployers have higher rates of newly reported respiratory symptoms than nondeployers (14% versus 10%), although rates of physician-diagnosed asthma and chronic bronchitis were not increased.4 More recent studies suggest that obstructive airways diseases, including asthma and constrictive bronchiolitis, are occurring in excess in returning troops.1,5 The magnitude and spectrum of respiratory illnesses from deployment are difficult to judge. Lack of predeployment spirometry and challenges with diagnosis limit accurate estimates of disease incidence and prevalence.

Burn pits. According to Department of Defense (DoD) estimates, in a typical military operation, each American soldier generates nine to 12 pounds of waste a day. That waste must be burned in pits or incinerators, or trucked to landfills, which are often not readily available. The open burning of solid and chemical wastes has been practiced in areas of southwest Asia where military personnel are stationed.6 Open air burn pits and simple incinerators with limited pollution controls generate smoke plumes with poorly characterized and highly variable constituents. Increasing concern about burn pit combustion product exposures is being expressed by returning troops.

Desert dust. Exposure to crustal dust and sand storms, sometimes lasting for days and often intense enough to obscure visibility, is an ongoing problem facing deployed troops (Figure 1). Adding to this problem is the severe degradation of soils in areas of southwest Asia due to overuse by heavy vehicles, along with often poor environmental controls for local industries. Air sampling has shown high levels of PM 2.5 (the particulate size that is respirable and able to penetrate the small airways) on many of the bases where US troops live and work.7 These dusts may contain high levels of metals (including lead) and may impair lung defense mechanisms.

Industrial fires. Exposure to smoke from burning oil wells was a concern during Operations Desert Shield/Desert Storm8 in the early 1990s. Although oil well fires have not been as much of a concern in the more recent southwest Asia theaters of operation, exposure to smoke from other types of industrial fires has been a problem in certain areas. A fire at the Mishraq State Sulfur Mine plant in Mosul, Iraq, in June 2003 burned for 3 weeks and released a sustained plume of smoke over a geographic area extending 25 km to the south and 50 km north to the Mosul Airfield. The plume contained variable but frequently high quantities of particulate matter, hydrogen sulfide (H2S), and sulfur dioxide (SO2).9 These oxides of sulfur are known causes of bronchiolitis.10 The US Army Public Health Command estimates that more than 6,000 returning troops (based on unit location) may have been exposed to the sulfur fire plume.

Cigarette smoking and secondhand smoke. Tobacco addiction is a significant health problem for our armed forces, and the potential effects of cigarette smoke on the lung function of US military personnel are substantial. In 2005, the rate of smoking in the military was reported at 32.2%, compared to 21% of the civilian population.11 By 2008, there was no significant change, with a smoking rate of 31%, despite declining smoking rates in the general public.12 Studies by the DoD have found a significant rise in smoking initiation and recidivism with troop deployment, especially in soldiers with prolonged or repeated deployments and in those with combat exposure.13 Besides the well-known long-term health risks of smoking, new onset smoking has been associated with risk for acute eosinophilic pneumonia in deployed military personnel.14

Although data are limited on the long-term effects of these complex and variable inhalational exposures, there is emerging evidence to suggest that deployment may be associated with an increased risk for large and small airways injury, including asthma (both new onset asthma and aggravation of preexisting asthma) and CB.

Asthma. Although not specific to the current exposures in Iraq and Afghanistan, there is a rich medical literature showing the relationship between exposure to particulates and risk for airways disease, particularly asthma. In addition to upper respiratory and eye irritation symptoms, asthma can occur following acute exposure to high concentrations of particulate combustion products with known respiratory irritant properties.15 Full recovery following such exposures may not occur, and permanent impairment from irritant-induced asthma is common. Of troops deployed to southwest Asia, 5% reported a previous diagnosis of asthma. Both asthmatic and nonasthmatic deployers reported a statistically significant increase in respiratory symptoms during deployment compared to symptoms preceding deployment. In a retrospective review of 7,151 active-duty soldiers examined at Veterans Affairs Medical Center, Northport, NY, asthma symptoms that required spirometry were more frequent in the Iraq/Afghanistan deployers than in troops deployed elsewhere, with rates of 14.5% and 1.8%, respectively (p <0.001).2

Constrictive bronchiolitis. Between 2005 and 2009, 80 soldiers returning from southwest Asia to Fort Campbell, Ky, were referred to Vanderbilt University for evaluation of postdeployment respiratory symptoms. In most cases, pulmonary function tests (PFTs) and chest high resolution computed tomographic (HRCT) scans were normal or only mildly abnormal. Forty-nine of these patients were referred for surgical lung biopsy. Of these, 38 had biopsy findings of CB. Of these, two-thirds (25/38) were never smokers.

Constrictive bronchiolitis is a lung disease characterized by obstruction and fibrosis of the distal airways or bronchioles (Figure 2). Known causes of bronchiolitis include certain chemicals (ie, nitrogen and sulfur oxides, as well as diacetyl, a component of butter flavoring), viral infections, connective tissue diseases, certain drugs, as well as heart and lung transplantation.10,16 It is considered rare in a young, otherwise healthy population. Constrictive bronchiolitis usually presents with subtle onset of exertional shortness of breath and nonproductive cough. Pulmonary function tests typically show airflow obstruction that does not improve with use of a bronchodilator, although resting pulmonary function may be normal. Static lung volumes may show hyperinflation; diffusion capacity (DLCO) is usually normal. Chest radiograph is usually normal but may show hyperinflation or bronchial wall thickening. Chest HRCT scan may show heterogeneous (mosaic) air trapping most prominent on expiratory imaging. There also can be areas of patchy ground glass opacities and scattered cylindrical bronchiectasis.17 The clinical manifestations of CB are nonspecific, and the disease may be difficult to diagnose without a surgical lung biopsy.

In our clinical experience, affected patients returning from deployment most frequently report shortness of breath with exertion. Many patients find that they are unable to pass military physical fitness testing requirements, whereas predeployment they could pass without difficulty. Although the physical fitness testing requirements differ between service branches, all service members are required to pass a 1.5 to 3 mile run within certain time limits (adjusted for age and gender) on a semiannual basis. Worsening of physical fitness run times may be an indicator of underlying lung disease and may be useful in identifying those who require further diagnostic evaluation. Other causes of decreased run times, such as deconditioning and weight gain, also must be considered in the clinical evaluation. Additional symptoms commonly reported by our patients seeking postdeployment pulmonary evaluation include prolonged (over 3 months) cough (typically nonproductive), wheezing, and chest tightness.

Evaluation of Lung Disease in This Patient Population

Medical professionals should ask military patients about specific respiratory symptoms, along with their smoking and past medical histories. Location, duration, and frequency of deployment are factors that may confer risk for chest symptoms and should be documented in the medical history. There should be a low threshold for obtaining spirometry in this patient population. It is essential that spirometry meet all parameters of quality and reproducibility.18 Unexplained chest symptoms, abnormal spirometry, or a documented and substantial decline in physical fitness testing ability should prompt further diagnostic evaluation and consideration for referral to a pulmonary specialist.

When post deployment patients are referred to a pulmonologist for evaluation of respiratory symptoms, the approach should include thorough occupational, environmental, and medical histories along with complete PFTs and chest HRCT scan. Pulmonary function tests should include pre- and post-bronchodilator lung volumes, spirometry, and diffusing capacity for carbon monoxide. The HRCT should include both inspiratory and expiratory views and prone/supine imaging. Other tests that should be considered in the diagnostic approach to patients with postdeployment lung symptoms include methacholine challenge to assess nonspecific bronchial hyperresponsiveness and metabolic exercise testing to assess for ventilatory, cardiac, and gas exchange abnormalities. Table 1 summarizes the diagnostic tests that we recommend for postdeployment patients undergoing evaluation for lung disease.

The role of lung biopsy in the evaluation of patients with possible postdeployment lung disease is uncertain. Surgical lung biopsy may be needed to make a diagnosis of CB if rest and exercise PFTs and HRCT scan are unhelpful in patients with persistent and unexplained exertional shortness of breath. If lung biopsy is considered, a surgical thoracoscopic biopsy should be obtained, as transbronchial lung biopsies are generally inadequate for diagnosis of CB. Patients who are considered for this invasive procedure should be clearly informed of the risks and uncertainties of this diagnostic approach. Additionally, there are few if any therapies that have been shown to improve outcomes for CB.

Concern for deployment-related lung disease is on the rise, as more US troops and civilian contractors are reporting prolonged and unexplained respiratory symptoms after returning from southwest Asia. Several exposures of concern have been identified, including burn pit emissions, desert dusts, and industrial fires and emissions. Medical professionals must be astute in recognizing postdeployment respiratory symptoms and possible lung disease. As previously deployed patients undergo thorough evaluation at tertiary care centers, our fund of knowledge regarding diagnosis and management of this younger patient population will continue to grow.