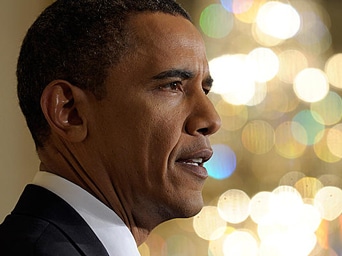 WASHINGTON, May 26, 2012 – President Barack Obama today urged all Americans to remember those who sacrificed for the country and to help service members still feeling the effects of war.

In his Saturday address, the president reminded Americans that Memorial Day is more than just a well-earned three-day weekend. “In town squares and national cemeteries, in public services and moments of quiet reflection, we will honor those who loved their country enough to sacrifice their own lives for it,” he said.

On Monday, Obama will place a wreath at the Tomb of the Unknowns at Arlington National Cemetery. The ceremony honors all Americans who died in war from those at Concord and Lexington to Baghdad and Kandahar.

Later in the day, he will participate in a ceremony at the Vietnam Veterans Memorial here marking the 50th anniversary of the war that claimed 58,000 Americans. “It’s another chance to honor those we lost at places like Hue, Khe Sanh, Danang and Hamburger Hill,” he said. “And we’ll be calling on you — the American people — to join us in thanking our Vietnam veterans in your communities.”

“We have to serve them and their families as well as they have served us: By making sure that they get the healthcare and benefits they need; by caring for our wounded warriors and supporting our military families; and by giving veterans the chance to go to college, find a good job, and enjoy the freedom that they risked everything to protect,” he said.

The country owes these Americans for their service, Obama said. “Our men and women in uniform took an oath to defend our country at all costs, and today, as members of the finest military the world has ever known, they uphold that oath with dignity and courage,” he said.

Americans need to let these veterans and their families know they are appreciated and cherished. “On Memorial Day, we come together as Americans to let these families and veterans know that they are not alone,” the president said. “We give thanks for those who sacrificed everything so that we could be free. And we commit ourselves to upholding the ideals for which so many patriots have fought and died.”