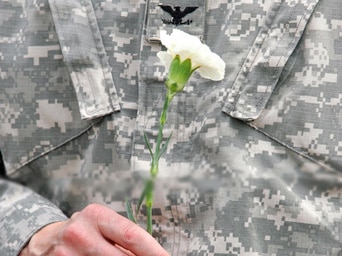 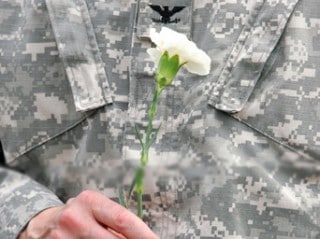 WASHINGTON, May 28, 2012 – President Barack Obama today called the treatment Vietnam War veterans received after they returned home “a national shame” and asked that Americans use the 50th anniversary of the war to set the record straight.

Obama spoke at the Vietnam Veterans Memorial wall on the National Mall. The black granite is incised with the names of 58,282 service members killed in the conflict.

“It’s here we feel the depth of your sacrifice,” the president said. “And here we see a piece of our larger American story.”

That American story is the generational pursuit of “a more perfect union,” Obama said. Each generation has a role to play in that effort – to overcome a painful past, to right a historic wrong, he said.

The president called the treatment a national shame and a disgrace that should never have happened. “That’s why, here today, we resolve that it will not happen again,” he said.

A central part of the 50th anniversary of the Vietnam War will be “to tell your story as it should have been told all along,” Obama said. “It’s another chance to set the record straight. That’s one more way we keep perfecting our union – setting the record straight. And it starts today.”

History will honor the service of the Vietnam generation. Their stories will join those of veterans going back to the founding of the republic, the president said.

“Let us tell the story of a generation of service members – every color, every creed, rich, poor, officer and enlisted – who served with just as much patriotism and honor as any before you,” he said.

Combat in Vietnam was brutal: Battles in Hue and on Hamburger Hill and the A Shau Valley sparked heroism that often went unremarked in a nation bitterly divided by the war. And American POWs “wrote one of the most extraordinary stories of bravery and integrity in the annals of military history,” Obama said.

“As a nation, we’ve long celebrated the courage of our forces at Normandy and Iwo Jima, the Pusan Perimeter and Heartbreak Ridge,” the president said. “So let us also speak of your courage — at Hue and Khe Sanh, at Tan Son Nhut and Saigon, from Hamburger Hill to Rolling Thunder. All too often it’s forgotten that you, our troops in Vietnam, won every major battle you fought in.”

And with the war over, the Vietnam vets continued to serve. “So let us also tell a story of a generation that came home, and how – even though some Americans turned their back on you – you never turned your back on America,” he said. “You became leaders and public servants, from town halls to Capitol Hill – lifting up our communities, our states, our nation.”

And they learned from the mistakes of the past. Those who stayed in uniform used their experience to rebuild the U.S. military “into the finest force that the world has ever known,” Obama said.

The Vietnam generation looked after each other, Obama said, by pushing the bureaucracy to provide the benefits they earned and speaking up for more research money.

“Just as important, you didn’t just take care of your own, you cared for those that followed,” he continued. “You’ve made it your mission to make sure today’s troops get the respect and support that all too often you did not receive.”

Vietnam vets were the moving force behind the Post-9/11 GI Bill that is helping hundreds of thousands of today’s veterans go to college and pursue their dreams, Obama said.

“Because you didn’t let us forget, at our airports, our returning troops get off the airplane and you are there to shake their hands,” he said. “Because of you, across America, communities have welcomed home our forces from Iraq. And when our troops return from Afghanistan, America will give this entire 9/11 generation the welcome home they deserve.”

This is the legacy of Vietnam, Obama said — the story of a generation that did its job.

“You served with honor,” the president said. “You made us proud. You came home and you helped build the America that we love and that we cherish. So here today, it must be said: You have earned your place among the greatest generations.”