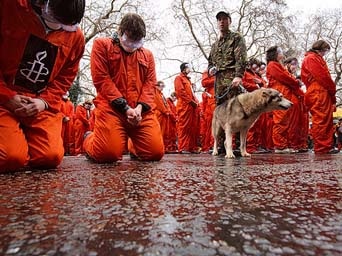 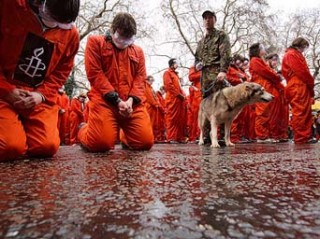 Despite President Obama’s pledge to end torture, the brutalization of Muslim prisoners at Guantanamo prison continues under his regime.

Guantanamo is where a thug squad called the Immediate Reaction Force(IRF) tortures inmates while pointing their required video cameras at the floor to hide their beatings.

In illegal and cowardly assaults on tied-up inmates that violate the Geneva Conventions, five or more Pentagon IRF MP’s will spray Mace in a prisoner’s face and then gang-beat him. The MP’s are known to break bones, gouge eyes, squeeze testicles, inject disease, force the prisoner’s head into a toilet or bang it on a concrete floor, smear the prisoner with feces, douse him with noxious chemicals, urinate on him and even sodomize him. A prisoner may also be virtually buried alive in total darkness underground for as long as three weeks, during which he is denied adequate food and sleep. Prisoners have also been hog-tied in painful positions for hours on end. In short, Guantanamo’s prisoners have suffered tortures far worse than France’s notorious Devil’s Island.

The above facts about Guantanamo are according to distinguished investigative reporter Jeremy Scahill in an article published for “World View News Service.” He quotes Michael Ratner, president of the Center For Constitutional Rights(CCR) as saying: “They (the IRF) are the Black Shirts of Guantanamo. IRFs can’t be separated from torture. They are part of the brutalization of humans treated as less than human.” Adds Scott Horton, a leading expert on the U.S. military and constitutional law, “They (the IRF) were trained to brutally punish prisoners in a brief period of time, and ridiculous pretexts were taken to justify” the beatings. (One prisoner said he was beaten for feeding crumbs to some lizards.)

In his book, “An Innocent Man in Guantanamo,”(Palgrave/macmillan), Murat Kurnaz, held there for five years even though it was clear to U.S. authorities he was innocent, writes, “Blows from the IRF team were the basic form of punishment at Camp X-Ray…beating us and then chaining our hands and feet, connecting those chains with a third one. You couldn’t move your arms, they were pressed to your body. Then they’d leave you sitting there like that and take away your blanket and the thin mattress. It could take days before they’d unshackle you…” Perhaps the ultimate in sadism, Kurnaz recalls, “fathers had to watch as their sons were beaten, and vice versa.”

Kurnaz writes that when General Geoffrey Miller took over Guantanamo in 2003 the plight of the prisoners “dramatically worsened.” “The interrogations got more brutal, more frequent, and longer. The first order General Miller issued was to commence Operation Sandman, which meant we were moved to new cells every one or two hours. The general’s goal was to completely deprive us of sleep, and he achieved it.” Kurnaz said that if he dozed off an IRF guard would punch him in the face.

The CCR has called upon the Obama regime to immediately end the use of IRF teams at Guantanamo. One Guantanamo defense lawyer said that after Obama took office his clients reported “a ramping up in abuse.” Horton says, “detainees should be entitled to compensation for injuries they suffered,” Scahill says.

“As Commander in Chief of United States Armed Forces under the terms of the United States Constitution, President Obama has an absolute obligation to terminate torture and war crimes committed  by the IRFs on Gitmo,” says Francis Boyle, professor of international law at the University of Illinois, Champaign.

“Failure to do so renders him liable for these international crimes under international criminal  law, U.S. domestic criminal  law, and U.S. Army Field Manual 27-10 on the Law of Land Warfare under the doctrine of Command Responsibility. The best way to do this would be to terminate the IRFs on Gitmo.” Boyle is author of “Tackling America’s Toughest Questions”(Clarity).

Scahill says that while Barack Obama, almost immediately upon taking office, issued an executive order saying he was going to close down Guantanamo within a year and that he was going to respect the Geneva Convention while his administration reviewed Guantanamo, the (IRF) force under Obama has continued to torture prisoners.

Sherwood Ross formerly worked as a reporter and columnist for major dailies and wire services. He currently heads a Miami, Florida-based public relations firm for worthy causes. Reach him at [email protected]