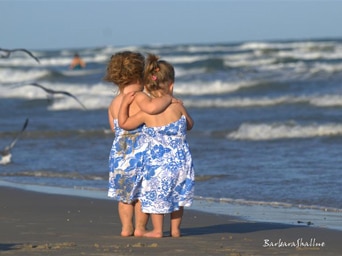 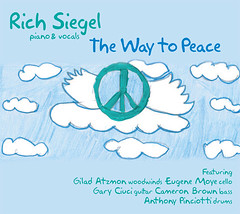 Emily’s art work immediately put me in mind of John Lennon who was inspired to write “Lucy in the Sky with Diamonds” by his son’s artwork–and also this John Lennon print that hangs above my bathtub: 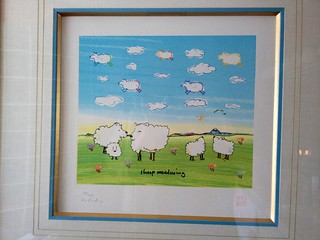 The first listen through of Rich’s twelve songs also put me in mind of Jesus/AKA The Prince of Peace and THE WAY, who began a movement with twelve ordinary men with the message that the One God Loves All People Equally.

Jesus was born lived and died a Palestinian Jew under a brutal military occupation.

Rich grew up in a Zionist home and lived in Israel before he learned he had been “lied to” about the “original sin” of national Zionism that continues to wreck havoc on the Holy Land. 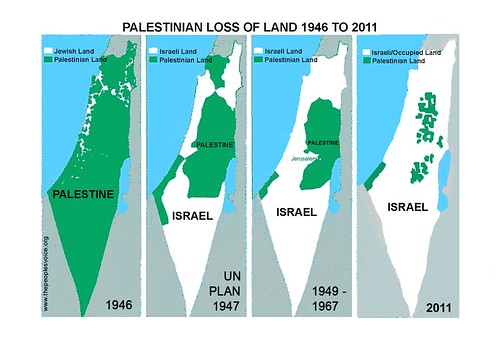 Rich dedicates his most haunting song, “In Palestine” to the children of Gaza and in particular to Abir Aramin.

“In Palestine” as Rich pleads to God for all of US to STOP the killing, I imagined what a wonderful world it could be IF only this song were sung in every Christian Church throughout America as the faces of the children of Palestine flashed on a screen:

All because of a photo first published by The Florida Catholicin 2000, muy life was irrevocably changed.Photographer Debbie Hill captured three-year-old George [it is his photo that adorns the banner of my website] of Beit Jala, which is less than a five-minute car ride from downtown Bethlehem.

The photo was shot the morning after the Israeli military forces retaliated against a few hopeless militants who had infiltrated George’s neighborhood to snipe across the way into the illegal settlement/colony of Gilo, which lies about a mile as the crow flies from the top of the hill around the corner from George’s home.

The shrapnel that blew apart the wall of George’s bedroom read ‘Made in USA’ and was delivered via American made Apache helicopters.

The second I saw George’s eyes, in that photo, my heart said “DO SOMETHING!”

And that was the moment that I began to wake up from my comfortable Christianity to the brutal military occupation of Palestine and see ALL the children of that troubled land as my children too.

George’s face has adorned the banner of my website since I established it in 2005 after my first of seven trips to the State of Israel and Land of Palestine.

Abir’s face has adorned the left margin of my website ever since I learned that on 16 January 2007, the ten year old was walking with her sister and two friends to buy some sweet treats during a break between classes in the West Bank village of Anata, which is about four miles from Jerusalem. 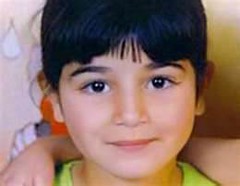 While standing beside her sister at a kiosk, Abir was shot in the head with a rubber bullet fired from the rifle of a Border Guard soldier who was sitting in his well-armored jeep.

After three days on life support Abir’s struggle ended- but not the struggle for justice her parents and all people of conscience seek-to STOP the KILLING in the Land of Palestine and State of Israel.

In 2007, Avichay Sharon, of Combatants for Peace explained, “Over the past 2 years, the Israeli Border Police and IDF forces have been creating provocations near the school district of Anata [which] has become a part of the daily routine for the children. Ever since construction started on the separation barrier surrounding Anata, the jeeps have been roaming the streets especially near the schools and shooting grenades and tear gas along with rubber bullets.”

Bassam Aramin, Abir’s father and co-founder of Combatants for Peace said, “I’m not going to lose my common sense, my direction, only because I’ve lost my heart, my child. I will do all I can to protect her friends, both Palestinian and Israeli. They are all our children.”
Israeli and Palestinian Children Killed
September 29, 2000 – Present

In March of 2006, I visited Anata and have been tormented by my memories ever since.The thirty-foot high concrete Wall that surrounds the boys high school where 780 Palestinian adolescents, only ‘playground’ is a slab of cement about the square footage of a basket ball court.

A resident refugee informed me that on a daily basis, “The Israeli Occupation Forces show up when the children gather in the morning or after classes. They throw percussion bombs or gas bombs into the school nearly every day! The world is sleeping; the world is hibernating and is allowing this misery to continue.”

A moment later, a teenage boy approached me as I was taking photos and asked me my name and where I was from. I cringed admitting I was American, for “financed with U.S. aid at a cost of $1.5 million per mile, the Israeli wall prevents residents from receiving health care and emergency medical services. In other areas, the barrier separates farmers from their olive groves which have been their families’ sole livelihood for generations.” [Washington Report on Middle East Affairs, Jan/Feb. 2007]

On July 9, 2004, the International Court of Justice/ICJ, ruled 14-1 that The Wall was illegal and it must come down and also that compensation should be paid to all who had been affected.

The ICJ Judges also decided 13-2 that signatories to the Geneva Convention were obliged to enforce “compliance by Israel with international humanitarian law” and the U.N. General Assembly also passed a resolution 150-6 supporting the ICJ’s call to dismantle the wall.” [Washington Report on Middle East Affairs, July 2009]

Less than five minutes by car from Anata, one can enter into the Orwellian Disney Land of lush green grounds called the Pizgat Ze’ev settlement.

All the settlements/colonies in the West Bank are illegal under international law.

I was sick at heart as I traveled through the colony and counted three playgrounds and a swimming pool.

I wondered how many USA tax dollars helped to build them, and outraged over the injustices of Walls and military occupation that American money provides against the indigenous people of that land.

Within fifteen minutes after leaving Anata, as I stood next to a playground in Pizgat Ze’ev, a barrage of gunshots issued from the refugee camp and my guide informed me that the Israeli soldiers were showering the refugees with gunfire and terror- another normal daily occurrence for them.

I lost it completely then and sobbed uncontrollably, as I imagined the Magdalena when she could not find her Lord.

And then I thought of how Jesus cried buckets of tears over Jerusalem when he “saw the city, he wept over it and said, ‘If you had only known what would bring you peace but it is hidden from your eyes.'”- Luke 19:42

Lady Justice, the Roman Goddess of Justice, an allegorical personification of the moral force in judicial systems, is depicted wearing a blindfold to indicate that justice should be meted out objectively, not based in favor of- or against- ethnicity, power, or weakness, but on blind impartiality.

How Do We Teach The Children- and ourselves- The Way to Peace?

“There is no way to peace-peace is the way”-A.J. Muste

But Rich Siegel’s CD offers us some wonderful ways to imagine it as we teach our children through music what a what a wonderful world it should and can be; and “What a Wonderful World” with Gilad Atzom on sax will blow you away and is also another highlight on The Way To Peace.