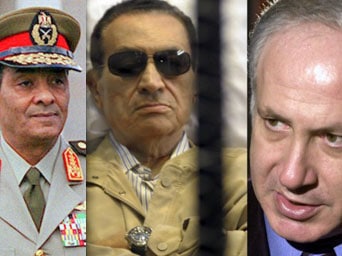 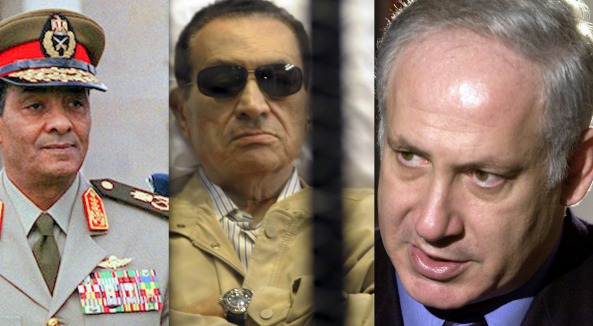 As June 30, the predetermined date for Egypt’s supreme council of armed forces(SCAF) to hand over power to an elected civilian government, is drawing nearer, all the major players in post-Mubarak transitional period are ready to throw in their last card … including Israel.

Some of the key players, like the Muslim Brotherhood, have even threatened to resort to violence if things don’t come their way.

The political scene in Egypt nowadays is pretty tense and rather precarious; SCAF is reluctant to cede power; Muslim Brotherhood (MB) is desperately trying to grab the seat of presidency especially that the parliament it controlled 75% of its seats has been legally disbanded by the supreme constitutional court.

Meanwhile the true revolutionaries and most of the secular political groups – leftists and liberals- are left behind, unorganized and unaccounted for. You can’t even find them anymore in Tahrir square.

I know what’s on your mind, but don’t get fooled by the thousands packing Tahrir you see in the reports of the Mainstream media; they are but hordes of MB followers who are instructed, and sometimes paid for, to pose for the media cameras as revolutionaries, whereas they only sing and dance for the MB presidential candidate, Mohamed Morsi.

Last Sunday, June 17, the polls of the run-off presidential elections closed after two days of voting, that has been closely monitored by local and international human rights groups.

And guess what, yes, that’s right …, the first post Mubarak presidential elections have been fair and square.

And the initial tallies indicate that the race between Mohamed Morsi, the MB candidate and Ahmed Shafik, Mubarak’s last prime minister has been so close that the next president will probably win by 51% of the total votes.

The whole vote, which lasted for two successive days, in more than 12000 major polling stations all over Egypt was as democratic and transparent as that of the late French presidential elections.

But what does that mean? It says one thing as clear as the sky of Egypt; the revolution managed to put an end to decades of rigged elections. Egyptians won’t be silent or apathetic ever again, especially when it comes to choosing the upcoming president.

Handing over power from SCAF to SCAF

That said, SCAF, having no control over the result of the presidential vote, has surprised everybody just hours before the polls were closed with a preemptive act; a new constitutional annex.

In the declaration, SCAF has transferred, or usurped to be exact, some of the top powers reserved for the president to the ruling military junta.

According to the amendments, the upcoming president will not be the commander in chief. He won’t be able to declare war, won’t have oversight over the military budget or armament, while the military will retain the legislative authorities until a new parliament is elected.

They will have the final say in security matters especially at times of turmoil and riots. In short, the constitutional annex is transferring power from SCAF to SCAF.

The week before the Egyptian runoff elections, the Israeli defense forces (IDF) has issued emergency call up orders to six reserve battalions in light of new dangers on the Egyptian borders and the repeated attacks that were allegedly launched against Israel from the Sinai Peninsula. And the Knesset has given the IDF permission to summon a further 16 reserve battalions if necessary.

And in response, the Egyptian second army has been put on high alert. A military source added that lots of armored vehicles and tanks have been pushed to the borders with Israel and vital targets have been secured like the Suez Canal waterway.

Interestingly, two days after the closing of the electoral polls, Egyptian security forces seized a huge arms shipment smuggled from Libya and other countries and allegedly destined to the Gaza Strip or Sinai.

On Saturday as the former President Mubarak lies in a military hospital amid conflicting reports of his clinical death,  the high electoral commission is due to announce the winner of the presidential run-off elections amid deep polarization, frustration over the failure to yet draft the new constitution and anger over dissolving the body of an elected parliament.

Unless all political parties heed the call for national reconciliation and unity, the once probable conflict between the military and the Muslim Brotherhood will now seem inevitable. And should that scenario take place, it won’t be long before the situation along the borders with Israel gets more volatile.