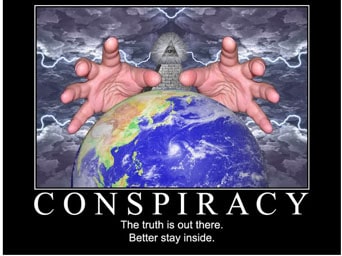 If enough isolated individuals pursue the same goal, the effect is indistinguishable from a conspiracy.

Working as a waiter, I noticed that one of the other waiters had more customers coming to see him. He was also making more tips than anyone else.

None of his fellow workers knew his secret. The only thing we all knew was that he was a horse-racing fan; but we didn’t think he had enough to bet heavily on the races.

One day I got up enough courage to ask him what his secret was for getting larger tips, promising that I wouldn’t share the secret with anyone else.

He surprised me by saying that he made predictions for his customers on winners at the race track. When I asked how he predicted the winners, he reluctantly agreed to tell me; but I had to promise not to tell anyone else.

“Eight customers come by looking for tips on the week’s winner,” he said, “and I give each of them a different horse to bet on. Seven will lose and one will have a winner.”

He added, “These guys make big bets, and the one who wins comes back to me with a big tip.”

He had eight people pursuing the same goal to win, betting on one major eight-horse race each week. They didn’t know each other nor were they aware of the waiter’s conspiracy.

Though my waiter friend was a sole conspirator, most conspiracies involve more people. In a way, the bettors were co-conspirators.

A conspiracy is (1) a secret plan by a group to do something unlawful or harmful, or (2) The act of plotting.

A conspiracy theory is a belief that some covert but influential organization is responsible for an unexplained event.

As more and more people tap into the wealth of knowledge, bluster, revelations, predictions and guesswork on the internet, the total number of online conspiracy theories increases exponentially.

According to Wikipedia, “The list of conspiracy theories is a collection of the most popular unproven theories.” The key word here is “unproven”.

“These are related but not limited to clandestine government plans, elaborate murder plots, suppression of secret technology and knowledge, and other supposed schemes….”

According to Benjamin Radford, writing for Live Science, “major companies we buy products from everyday have been found guilty of conspiring to fix prices and reduce competition.”

Radford added, “Just about any planned criminal act committed by more than one person could be considered a conspiracy, from simple murder-for-hire to the Watergate break-in.”

Conspiracy theories are just that: theories. They’re often followed and repeated by many; and they’re as difficult to disprove as they are to prove.

Live Science offers ten leading conspiracy theories, all of which are clearly explained for those who don’t know, on their website.

For those with questions about these conspiracy theories, Live Science provides excellent explanations of each.

The first of these is definitely a conspiracy. The theory part involves determining whether the conspirators were Osama bin Laden and followers or Bush, Cheney and Rumsfeld.

The two most abhorrent conspiracies of the last decade were the one that got the USA and the UK into war in Iraq and the current conspiracy to get America into war with Iran.

These are seldom referred to as conspiracies. There’s no doubt that the first, which columnist James Wall referred to as “the 2003 Shock and Awe production”, was advocated and planned by Israel, American Zioncons and Israeli-firsters. It was fully supported by the American and British media and governments.

The hidden rationale for the invasion and occupation of Iraq was the lie that Iraq had the capacity to produce weapons of mass destruction (WMDs). Following the invasion, no one could find any evidence of WMDs.

The real reason for the invasion of Iraq involved the protection of Israel from any future development of WMDs, which Israel and its American supporters insisted upon.

The Israelis have long wanted to get rid of the Palestinians. However, they know that they must first get rid of any major threats from the rest of the Middle East.

If, as Cole has suggested, Israel has used its nuclear arsenal to threaten others, there’s every reason to believe that Netanyahu is “behind the scenes, once again pushing the US toward an attack on Iran.”

With Congress genuflecting at every wish and demand of Israel’s and their American accomplices, the theory will more than likely become the catastrophic results of a horrendous conspiracy.

The only hope that America (and perhaps the rest of the world) has involves an awakening of the public to the predictably horrific results of yielding to the collaborating demands of Israel and its co-conspirators.

It cannot be too soon for the public to exercise voting pressure on an unscrupulous Congress to place what’s good for America ahead of what’s good for an insidious Israel.