On Flag Day in the USA, I received an email written in Jerusalem and disseminated by the National Catholic Worker/CW list-serve:

“Mordechai Vanunu needs the CW…Vanunu cannot eat Nobel Prize nominations, nor speak with them. He needs money and friends in order to survive his continued persecution…Vanunu is both Prophet and pauper. Like many ‘veterans’ he has special needs.”

I forwarded that email to Israel’s Nuclear Whistle Blower and he replied with an idea for me; but I had another, and after a few email exchanges we agreed on a plan-which follows this background story-but first he also wrote:

“Since January when I moved back to East Jerusalem, I am again meeting with foreigners and going to churches. I am ready to meet anyone who is coming here…it is good for the mind to know that some one care…and Freedom Must Come.”

When I shot this photo of Vanunu the last time I saw him on June 14, 2009, I felt he was looking out into a Future of FREEDOM 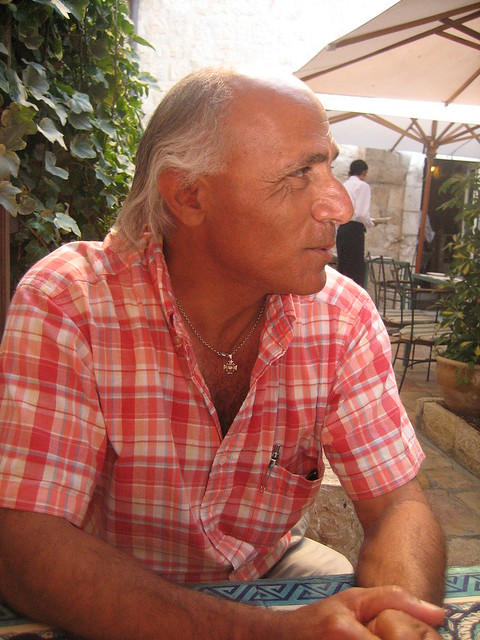 But in the moment I read the CW email about Vanunu I heard within my heart:

“If someone has enough money to live well and sees a brother or sister in need but shows no compassion–how can God’s love be in that person?” 1 John 3:17

And then I recalled the first time I wrote an article calling him a prophet and Vanunu shot back: “DO NOT CALL ME THAT!”

But in the spirit of freedom of speech, I do!

I also contend than prophets do NOT predict the future-as much as they point out impending doom, are never esteemed by their own, rarely respected in their life time, but they do provoke those so inclined to think about God-to think!

Vanunu pointed the way to Israel’s clandestine weapons of mass destruction program underground in the Negev desert in 1986. To this day the Dimona remains un-inspected by IAEA inspectors and many consider Vanunu a traitor, but all he did was TELL THE TRUTH 26 years ago!

Vanunu also puts me mind of the Hebrew prophet Jeremiah who spent much of his life under house arrest in Jerusalem, for being a truth teller.

We know more about the personal life and struggles of Jeremiah than any other Hebrew prophet and Jeremiah, translates as “The Lord throws”-as in hurling.

Jeremiah had few friends and is considered primarily a prophet of doom.

Jeremiah was intensely introspective, self-critical, timid by nature but honest and open about his feelings. Jeremiah never married and began prophesying in Judah from 604-586, a time of storm and stress when the doom of entire nations-including Judah itself-was being sealed. Jeremiah had been the king’s friend and confident, but the prophet soon entered a dreary round of persecution and imprisonment, alternating with only brief periods of freedom, and lived under virtual house arrest for speaking his conscience.

Jeremiah said, “I cannot keep silent…Disaster follows disaster; the land lies in ruins…My people are fools; they do not know me.”-4:19.

Exactly seven years ago to the very day I am publishing this piece and during our third meeting, Vanunu was telling me about his childhood in Marrakesh, Morocco.

When I told him I had never been and then Vanunu asked me if I had ever seen the  “Dorothy Day” movie, “The Man who Knew Too Much” for the beginning scenes were shot where he grew up.

I laughed out loud because he meant to say Doris Day and because in that very moment I realized my most cherished childhood dream had matured!

My childish dream had been to grow up and become Brenda Starr, the red headed, ace investigative journalist, who was smarter than the guys, glamorous and headstrong. Star reporter for the metropolitan daily, The Flash, Brenda traveled the world solving mysteries and unearthing scoops. Brenda intuitively knew when somebody was not telling the truth and fearlessly went around the world searching for unusual and usually dangerous stories.

Vanunu’s slip of the tongue was the catalyst for me to begin to imagine following in the footsteps of Dorothy Day, the 20th century socialist muckraker who became a committed Christian of The Beatitudes and a voice for the voiceless in her newspaper “The Catholic Worker” which persists today.

Three weeks after my first of seven trips to the State of Israel and Land of Palestine, I established  WeAreWideAwake.org

Day was also a prolific writer who understood:

“Writing a book is hard, because you are giving yourself away. But if you love, you want to give yourself. You write as you are impelled to write, about man and his problems, his relation to God and his fellows. You write about yourself because in the long run all man’s problems are the same, his sustenance and love.”

I know it too, but work can be labors of love when you love what you do; and as I have now begun my fourth book-working title is “VANUNU Waits for Liberty and My Life as a Candidate of Conscience for US HOUSE” all proceeds received for my third book  BEYOND NUCLEAR: Mordechai Vanunu’s FREEDOM of SPEECH Trial and My Life as a Muckraker: 2005-2010 are now going to Vanunu’s Liberty Fund and liberty means Freedom!

UNTIL People of Conscience step up and HELP me establish a 501c3 to HELP this man who acted on Conscience 26 years ago to avert a Nuclear Holocaust and Establish a Nuclear FREE Middle East
donations can be mailed directly to Vanunu’s USA bank account but as it is a trust fund he will never know who sent him a gift unless you tell him and he can be reached @  < [email protected] > or phone him in east Jerusalem on him mobile: ( 9 7 2 ) 0523744569

To send a gift by PayPal and receive a copy of  BEYOND NUCLEAR: Mordechai Vanunu’s FREEDOM of SPEECH Trial and My Life as a Muckraker: 2005-2010

With 100% of your donation going to MORDECHAI VANUNU’S LIBERTY FUND – as I will eat the cost of printing and mailing visit: www.eileenfleming.org

In 1987, from Ashkelon Prison, Vanunu wrote:

“I have no choice. I’m a little man, a citizen, one of the people, but I’ll do what I have to. I’ve heard the voice of my conscience  and there’s nowhere to hide. The world is small, small for Big Brother.  I’m on your mission. I’m doing my duty. Take it from me. Come and see for yourselves. Lighten my burden. Stop [this] train. Get off [this] train. The next stop — nuclear disaster.”