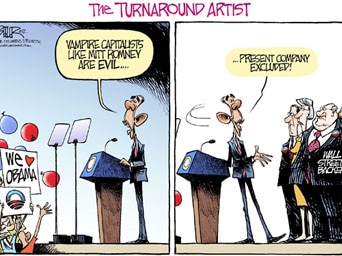 Who Own and Control America

Jamie Dimon’s gold embossed presidential seal cuff links, a gift from the president, are a blatant reminder that Obama plays lead to Jamie Dimon and the fat cats ~ who obviously control America: 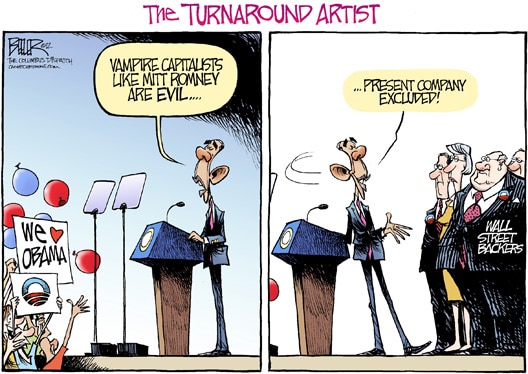 Forbes rates JP Morgan Chase CEO Jamie Dimon as the 41st most powerful person in the world with annual earnings of almost 21 million.

JPMorgan Chase is one of the Big Four banks of the United States with Bank of America, Citigroup and Wells Fargo. According to Bloomberg, as of October 2011 JPMorgan Chase surpassed Bank Of America as the largest U.S. bank by assets. 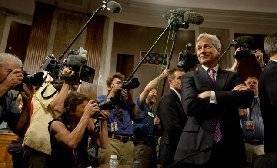 So when Jamie Dimon waltzed into the Congressional hearings last week sporting his gift Presidential seal gold embossed cuff links from President Obama ~ it was a not so subtle in-your-face statement to congress and the American people of who not only owns but is in charge of America.

So let’s see what’s underneath this blatant act of arrogance.

Ellen Brown cuts to the quick with her recent brilliant analysis ~ The US Senate won’t touch Jamie Dimon because JPM derivatives prop up US Debt;

“ What is going on with this panel of senators?” asked Jon Stewart.  “They’re sucking up to Jamie Dimon like

they’re on JPMorgan’s payroll.”  The explanation in a news clip that followed was that JPMorgan Chase is the biggest campaign donor to many of the members of the Banking Committee.

That is one obvious answer, but financial analysts Jim Willie and Rob Kirby think it may be something far larger, deeper, and more ominous…. The national debt is growing at $1.5 trillion per year.  Ultra-low interest rates MUST be maintained to prevent the debt from overwhelming the government budget.  Near-zero rates also need to be maintained because even a moderate rise would cause multi-trillion dollar derivative losses for the banks, and would remove the banks’ chief income stream, the arbitrage afforded by borrowing at 0% and investing at higher rates.

The low rates are maintained by interest rate swaps, called by Willie a “derivative tool which controls the bond market in a devious artificial manner.”

Kirby contends that the only organization large enough to act as counterparty to some of these trades is the U.S. Treasury itself.  He suspects the Treasury’s Exchange Stabilization Fund, a covert entity without oversight and accountable to no one. Kirby also notes that if publicly-traded companies (including JPMorgan, Goldman Sachs, and Morgan Stanley) are deemed to be integral to U.S. national security (meaning protecting the integrity of the dollar), they can legally be excused from reporting their true financial condition.  They are allowed to keep two sets of books.

Interest rate swaps are now over 80 percent of the massive derivatives market, and JPMorgan holds about $57.5 trillion of them.  Without the protective JPMorgan swaps, interest rates on U.S. debt could follow those of Greece and climb to 30%.  CEO Dimon could, then, indeed be “the guy in charge”: he could be controlling the lever propping up the whole U.S. financial system.”.

Ellen Brown asks the key question ~ Is there no alternative but to succumb to the Mafia-like Wall Street protection racket of a covert derivatives trade in interest rate swaps?

“ As Willie and Kirby observe, that scheme itself must ultimately fail, and may have failed already.  They point to evidence that the JPM losses are not just $3 billion but $30 billion or more, and that JPM is actually bankrupt ;

The derivatives casino itself is just a last-ditch attempt to prop up a private pyramid scheme in fractional-reserve money creation, one that has progressed over several centuries through a series of “reserves” ~ from gold, to Fed-created “base money,” to mortgage-backed securities, to sovereign debt ostensibly protected with derivatives.  We’ve seen that the only real guarantor in all this is the government itself, first with FDIC insurance and then with government bailouts of too-big-to-fail banks.  If we the people are funding the banks, we should own them; and our national currency should be issued, not through banks at interest, but through our own sovereign government.”

“The swap market lacks necessary street lamps,” he said. “I think the American public still isn’t safe on these roads until we get the rules of the road in place. I think the America public was bystanders to taking on excessive risk in 2008, and we still have been.”

Now get this !  JPMorgan receives a government subsidy worth about $14 billion a year, according to research published by the International Monetary Fund. That $14 billion dollars represents 77 percent of JP Morgan’s net income for the past four quarters. In other words, U.S. taxpayers helped foot the bill for the multibillion-dollar trading loss that was the focus of last weeks hearings. See full report:

We are all being played for suckers but If you think things are dangerous here ~ take a look at the Euro zone through the eyes of UKIP Nigel Farage ~ who rightfully calls the whole thing a giant Ponzi scheme. Here’s U.K.

Independence Party Leader Nigel Farage discussing the causes of the financial crisis in Europe as well as the inadequacy of its present leadership . 6 minute video

So there you have it, the global economic and monetary system is coming apart at the seams, the Banksters, both here and abroad, can no longer hide from the truth that Jamie Dimon and the fat cats own America as well as President Obama and congress ~ and that bailing out the banks always ends with tax payers paying the bill.

And speaking of taxpayers ~ where does half of the money that the IRS siphons off from the paychecks of its citizens in taxes every year go?

It’s the war machine and a subject that the financial news media is strangely silent about.
4 minute Video:

If you’re not angry, you’re on life support or another planet.