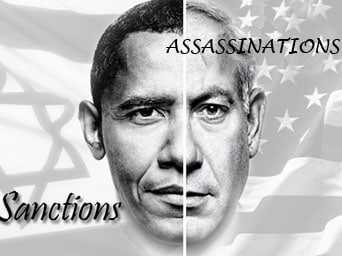 The illegal oil embargoes against Iran have begun to take effect; a precocious smile of satisfaction breaks upon the ugly face of Zionism; and the US once again proves its lapdog fidelity to the Zionist regime.

That’s not all, though. Israel craves for more and Washington has no choice but to cater to the wanton demands of a decadent colonizing regime.

A report carried by the Reuters titled “Iranians feel the pain as West tightens sanctions” details the “financial and social woes” exacerbated by these sanctions in Iran and succeeds in faking a larger-than-life image of the woes the Iranian society encounters in the face of the sanctions. That the oil sanctions exercise a detrimental effect on the financial issues of the Iranian society is a bitter reality which shamefully strikes right in the face of Washington which is seen by pundits and laymen alike to be making herculean efforts to hamper the progress of the Islamic Republic by targeting and placing pressure on the general public.  However, the report falls short of mentioning the group to be mostly and brutally afflicted with these sanctions.

There are more than fifty kinds of badly needed medicine for people who suffer from certain diseases such as cancer, children’s cancer, Thalassemia, Multiple sclerosis (MS), respiratory and heart diseases. The drastically declining import of such medicine caused by the US-engineered sanctions on Iran’s banking and transactions has reached an ominously critical point in the country. The rise in dollar value against rial has further complicated the issue, doubling or tripling the price of medicine. Those who suffer from such diseases hardly find their medicine or if they do, they should pay a heavy price. These facts do not worry Washington in the least bit as these are human issues and human issues do not appear to concern the US government.

Washington’s vitriolic animosity towards Iran is nothing new and the fact that they wish to cripple the country’s economy at the behest of the Zionist regime is no secret book to anyone.

Besides, these unilateral sanctions starkly run counter to international laws and can become a major issue at an international court though the whole notion seems bitterly remote to a cynical mind when one considers the considerable degree of influence that Washington and the Zionists exercise in the world.

Be that as it may, Iran mulls taking legal action at the International Court of Justice against US-led sanctions. Mohammad Nahavandian, the president of Iran’s Chamber of Commerce, Industry, Mines and Agriculture raised the issue during a recent session of the International Chamber of Commerce (ICC). The members slammed the unilateral US-engineered EU sanctions against Iran as illegal.

Nahavandian says, “The members asserted that the unilateral sanctions are in contradiction to the rules of the International Chamber of Commerce and also against the international free trade frameworks.”

This has to be pursued vehemently as the ICC members agreed that if Iran were to take legal action in The Hague, the court would definitely vote against the sanctions.

Two rounds of talks have recently taken place between the P5+1 and Iran with no practical steps. Just prior to the first round of talks between the big six world powers and Iran in Baghdad on May 23, 2012, Israeli Prime Minister Benjamin Netanyahu said that the demands on Iran are clear: 1. Stop enriching uranium, 2. Remove already enriched uranium, and 3. Close the underground Fordow nuclear facility near Qom.

Interestingly, these three demands were placed high on the agenda of the multifaceted talks in Baghdad by the American party who had well received her nuclear lessons from the Zionist regime.

There are two subtle points in these demands which need to be put under critical scrutiny.

Firstly, it is quite clear that these demands were enunciated in an ambience where the American party knew the Islamic Republic would never give in to such terms. Iran will never stop enriching uranium; Iran will never close Fordow nuclear facility and Iran will never ship out the already enriched uranium on which the Islamic Republic has expended so much money and energy. So why does the American party even broach it when it already knows the answer? As Ambassador to International Atomic Energy Agency (IAEA) Ali Asghar Soltanieh said in an interview with Reuters Iran will never suspend uranium enrichment and sees no reason to close the Fordow nuclear site.

“Iran will not close the underground nuclear site as the country sees no justification for doing so. Fordow is a safe place. We have spent a lot of money and time to have a safe place…. When you have a safe place, secure place under IAEA control, then why do you tell me that I should close it?”

In the same interview, he clearly stated, “One thing is clear: the enrichment in Iran will never be suspended.”

“Neither sanctions, nor military actions, nor assassinations of our scientists will stop the enrichment,” he emphasized.

Secondly, if the American party already knows the answer to the demands, why does it have to bother at all to point them out? Isn’t it because they capitalize on international community’s ignorance of Iran’s nuclear energy program and are resolute to depict Iran in a negative light only to push ahead with their diabolical goals i.e. quenching their thirst for invasion and beefing up the obesity of their military muscle in the region.

Indeed, the sanctions are an invasion of justice, a tacit declaration of war and a brutal tactic of breaking down a determined nation who sees no point in bowing down to Washington’s imperialist lust or capitulating to the thieving Zionist regime which has stolen the dreams of a nation.