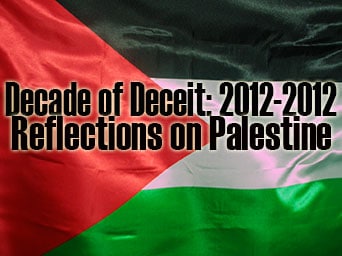 William A. Cook’s ‘Decade of Deceit’ is a collection of spectacular articles written by a man who has gradually awakened to the disastrous meaning of the Zionification of our universe. Being an authentic and unique poetic voice, Cook manages, layer by layer, of to unravel the hypocrisy that has contaminated every aspect of our life – morally, culturally, spiritually and politically.

But Cook is not only a superb poet, he is also an English Professor and it is this synthesis between the aesthetic and the academic that makes this book such a staggering and fascinating spiritual text. It is this unique shift between scientific precision and creative beauty that makes ‘Decade of Deceit’ a must-read.

Collections of articles can be tedious, but sometimes they can also provide us with a glimpse into the workings of a sharp and astute prophetic mind. ‘Decade of Deceit’ introduces us to an ethical thinker and the ways in which he has formed his thoughts about Israel, Palestine, the USA, contemporary politics, and ourselves – the witnesses of our own emerging tragedy.

Cook is a natural wordsmith with the rare capacity to deliver, by way of beauty, a very poignant message. This American English scholar clearly knows how to turn his pen into a sword, yet he aims only at peace, harmony and reconciliation. In December 2002 he writes to Osama Bin Laden “vengeance is a disease that multiplies, divides, and becomes the scourge of humankind; it is anathema to creation because it destroys what exists.” But then, just a few pages later, as hell is about to break loose, we are captivated by Cook’s search for harmony. In March 2003 as America went to war he wrote “I went to the lake to find peace, this being the week the president gave one of his rare prime time press conferences, the only opportunity we, the public, get to see him perform. It’s also the week America goes to war.”

It takes courage to look evil in the eye but it takes even more courage to pose the following questions in free America. “What fuels slavery, ethnic cleansing, land theft, and genocide? What enables a mind to justify imprisoning another without cause, without trial, without rights of due process and assumption of innocence until proven guilty? What enables a soul to accept dominance over another, to degrade and humiliate other humans, to participate in or acquiesce to genocide?” And Cook doesn’t shy away from answering his question:  “Genocides and holocausts arise out of unchecked zeal, unquestioned duty, and silent acquiescence. They are fueled by blind belief, personal fear, and a sense of superiority that gives license to slaughter.” This is clearly an astute reading of both Israeli and American exceptionalism – the combination of fear, superiority and dogmatism are indeed lethal.

As we progress through the text the questions and observations posed by Cook becoming increasingly crucial.  From 2003 onward, the English-speaking Empire has submissively allowed itself to become an Israeli mission force, the Iraq war being just one obvious example.  In November 2007 Cook writes, “I woke from a dream last night with a sudden start, the world had turned inside out … the sun did not shine, the moon did not come out … darkness enveloped the earth, and all that had been was no more.”….” But the bleak reality in which we live, led Cook to realise that he actually ‘did not wake from that dream’.

“I am living that dream today as I watch the world walk in darkness, befuddled by deceit, desirous to end the violence of these past 60 years, expectant, hopeful, a little fearful that the joy of the season may be marred for themselves and the Palestinians if the conditions of the Zionists are not met even if it means that all of us must accept the will of those who control by force of might and rule in ruthless disregard of any who stand in the way of their desires. The Beast of Hypocrisy walks the streets of Annapolis, it hides its ugliness beneath its cashmere long coat as it enters the conference hall to present in elegant verbiage its compassionate intent that peace might at last come to the mid-east, but in the darkness we do not see the maggots that reside beneath that elegant exterior, the maggots that have eaten away the moral innards of the people that have gathered to deny the people of Palestine the justice they so rightfully deserve.”

We are indeed, day after day, deceived by a system that has been hijacked by a foreign power. In October 2011 Cook discloses his own vision of the current American reality:

“Citizens no longer control their government; they are slaves to it. Representatives no longer serve the citizen seeking their consent to govern, they are servants of the corporations and lobbies that control the economic system to which the citizen is enslaved. Presidents no longer lead, they are the obedient lackeys of their corporate overseers. Freedom of speech and belief and freedom from fear and want do not determine the needs of humans, economics of the market place supersedes all at the expense of the citizen and human rights. We exist in a corporate world of unending wars, of vengeance and recrimination, of fear as a commodity that imprisons the mind, of greed that destroys the resources of this planet without remorse, and of insatiable arrogance that harbors no concern for those it destroys.”

I can only assume that Cook’s journey has led him to realize that, by now, we have all become Palestinians. We are all subjected to that same total abuse that has robbed and distorted each and every precious value that ever made the West worthwhile. So I guess that one possible interpretation of Cook’s work may as well be that solidarity with Palestine should start at home and that unless we liberate ourselves first, there is only little we can offer others.

Gilad Atzmon’s latest book is The Wandering Who? A Study of Jewish Identity Politics.