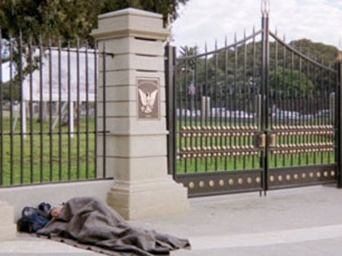 “I am concerned for the security of our great nation, not so much because of any threat from without, but because of the insidious forces working from within.” – General Douglas MacArthur

Anyone who has been paying the slightest bit of attention knows that we are living in some very perilous times here on American soil.

Consider that a non-Veteran can put on a U.S. Military Uniform with a chest full of Combat Medals awarded to others, including the Medal of Honor, and then openly lie about serving our country and it’s called “Freedom of Speech.”

But when a 10-year active-duty Marine Combat Sergeant posts a personal comment on Facebook about the Commander-in-Chief, he is given an other-than-honorable discharge and loses all his Military benefits and awards.

This is consistent in how our Courts continue to rule against our Military and Veterans and rule in favor of non-Veterans.

While many will disagree with the various lawsuits that are filed by the ACLU, myself included, we’d be hard-pressed to find anyone who would be in opposition to their current civil lawsuit filed on behalf of disabled and homeless Veterans against the top-level bureaucrats in the Department of Veterans Affairs.

Nonetheless, there are those who are intensely opposed to the lawsuit and are gloating gleefully that a Federal Judge has ruled against disabled and homeless Veterans.

It is beyond comprehension that President Obama would allow his Department of Justice and U.S. Attorneys to fight against this lawsuit, even filing for its dismissal.

Does anyone believe that Barack Obama is not a card-carrying member of the ACLU?

So why isn’t America’s Commander-in-Chief defending our disabled and homeless Veterans instead of fighting them? After all, he is constantly boasting about honoring a sacred trust that our Nation has with our Veterans to protect them with proper care and shelter.

How could any grateful American Citizen not come to the defense of disabled and homeless Veterans who have defended our own freedom and safety?

Yet the same U.S. Attorneys fighting vigorously against disabled and disadvantaged Veterans that are homeless and hungry also launched an independent criminal investigation into a purported beating against an inmate at the Los Angeles County Jail system by two Los Angeles County Sheriff’s Department deputies.

It’s simply incredulous that U.S. Attorney’s are protecting and defending one thug criminal who is incarcerated in a prison facility that gives him a roof over his head, a warm bed, hot showers and three square meals every day, while simultaneously fighting against 20,000 disabled and disadvantaged Veterans who are hungry and homeless and live in back-alley squalor because they’ve been dispossessed and exiled from their legally deeded Home.

Even worse, U.S. District Judge S. James Otero (not a Veteran) has sided with the U.S. Attorneys and the Department of Veterans Affairs in denying Veterans who are severely disabled from getting proper healthcare and housing.

Instead of using moral authority and issuing a “State of Emergency” order demanding the Department of Veterans Affairs immediately build temporary shelter and healthcare for tens-of-thousands of homeless Veterans in Los Angeles, Judge Otero stooped lower than anyone could ever imagine and ruled against providing healthcare and shelter for the very men and women who became disabled while defending our Nation and the U.S. Constitution that he swore an Oath to support and defend.

By bowing to the Obama defense team instead of standing up and defending the men and women who pledged their lives to defend our Nation, it’s crystal clear that Judge Otero’s denial of disabled, disadvantaged and homeless Veterans is betrayal in the worst order … cowardly betrayal.

While the ACLU lawsuit is a “civil” one, there is absolutely nothing civil in the way the Department of Veterans Affairs abuses disabled and homeless Veterans and misappropriates their legally deeded land, nor is there anything civil in the manner in which the Department of Justice and a Federal Judge are running roughshod over their civil liberties, safety and well-being.

The ACLU civil lawsuit is simply round one in the federal court battle and any of the rulings against disabled and homeless Veterans must be appealed all the way to the Supreme Court.

And, oh-by-the-way, there is not one Veteran on the U.S. Supreme Court, yet it is the men and women of our United States Armed Forces who defend the U.S. Constitution that they are supposed to uphold.

Make no mistake, the activities that prompted the ACLU civil lawsuit are criminal in their origin, including the biggest land-fraud scam in American history that has compounded the abuse of disabled and disadvantaged Veterans with willful neglect, violation of the Americans With Disability Act, humiliating and degrading treatment, Human Rights violations, reckless disregard, endangerment, and a multitude of other heinous crimes against humanity.

Congressman Henry Waxman is the elected public servant entrusted to protect Veterans property and their health and welfare because this is largest VA in the nation and it is situated in his Congressional District.

He has not only breached his fiduciary duty to uphold the Congressional Act of 1887 and the Legal Deed of 1888, but he has aided and abetted in the misappropriation of this sacred land and betrayed the health and wellbeing of disabled and disadvantaged Veterans.

Government’s cowardly betrayal against the very men and women who pledged their lives to defend our Nation and our own safety is deplorable and indefensible.

And before anyone tries to say this is political condemnation because President Obama, Senators Feinstein and Boxer, and Congressman Waxman are all Democrats, you need to know that Judge Otero was appointed by Republican George W. Bush.

In sum, they’re all equally culpable and taking care of our Veterans is not a political issue. It’s an American responsibility.

Is there anyone in the United States Government who has the courage to defend America’s disabled, disadvantaged and homeless Veterans?