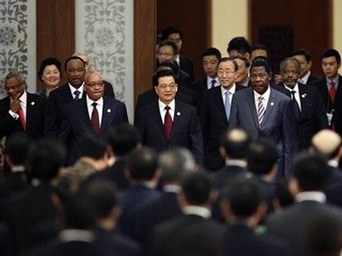 WORLD NEWS TOMORROW | WNT NEWS – Chinese President, Hu Jintao, offered on 19 July $20 billion in loans over the next three years to African countries. It is a continuation of a relationship between Beijing and struggling countries of the resource-rich continent in return for their mineral resources and their wealth.

The loans doubled the amount which China offered for the previous three-year period and it is a part of a strategy to enhance China’s relations with African nations, many of which are among key suppliers of oil and raw materials.

He was joined by South African President Jacob Zuma and Equatorial Guinea’s Teodoro Obiang Nguema, who has been widely condemned as one of the world’s most corrupt leaders. He pledged that China will support

“African countries to choose their own development path, and will wholeheartedly and sincerely support them to raise their development ability” and added that his country will “continue to expand aid to Africa, so that the benefits of development can be realized by the African people”. Are you dreaming Mr Zuma ? Good luck !

He pointed out that the new loans would support infrastructure, agriculture, manufacturing and development of small and medium-sized businesses in Africa. Majority of major infrastructure projects in Africa have already been done by Chinese companies, often with the imported labor from China.

The EU has criticised China’s “cheque book approach” to doing business with Africa with a complete lack of concerns about human rights, good governance and transparency. However, South African president Zuma stressed that “Africa’s past economic experience with Europe dictates a need to be cautious when entering into partnerships with other countries”. He emphasized that in relationship with China “we are equals” and that “agreements entered into are for mutual gain”.

“We certainly are convinced that China’s intention is different to that of Europe, which to date continues to intend to influence African countries for their sole benefit,” Zuma said. So my Question to you Mr Zuma Why do you need money from Europeans and IMF all the time ? Its that a but abusive ?

Trade between China and Africa has significantly increased over the past decade, with Chinese need for resources to power its growing economic boosting exports of African raw materials. In turn, moderate economic growth in Africa boosted demand for cheap Chinese products.

In addition to trade, the Industrial and Commercial Bank of China has invested more than $7 billion in various projects across the continent.