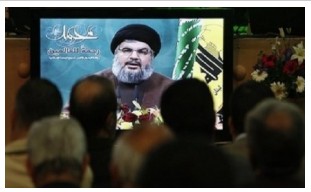 Hezbollah is preparing ‘a big surprise’ for Israel, Nasrallah says

Hezbollah is preparing a “big surprise” for Israel, the Shiite organization’s secretary-general, Hassan Nasrallah, said on Wednesday in a speech marking the sixth anniversary of the Second Lebanon War.

During the speech, delivered via video feed to a crowd of Hezbollah supporters in Beirut, Nasrallah proudly revealed that Syria had been arming Hezbollah, as well as groups in the Gaza Strip, with long-range missiles capable of reaching all of central Israel, including Tel Aviv.

“Syria is a big problem for the Americans and Israelis because Syria is the real supporter for the resistance and especially at the military level,” Hezbollah-affiliated Al-Manar television quoted Nasrallah as saying. “Syria was not only a passageway for the resistance, but also a real military supporter of the resistance. For example, the most important missiles that fell on Haifa and central Israel [during the Second Lebanon War] were Syrian-made missiles.”

The Hezbollah leader also said Syrian weapons were being used by Gaza terrorists against Israel. “The most important weapons we fought with during the July war were from Syria, not only in Lebanon but also in the Gaza Strip. The missiles delivered to Gaza managed to force more than a million settlers to stay in bunkers and frightened Tel Aviv. When the Arab regimes were barring bread and money from entering Gaza, Syria was sending weapons along with food to Gaza.”

“We know that the enemy is working night and day to gather information about our rocket launchers and I call on them to draw conclusions from their mistakes. We know what your [Israel] first strike will be and we promise you a big surprise, and of course I want the Lebanese people and all the peoples to be very confident in the resistance’s capabilities and to know that in this region we have the heart and will to organize, manage, fight and eventually win,” Nasrallah said.

“Our fate is not defeat and failure like most Arab rulers claim. We will prevail. Just as we achieved the great victories in 2000 and 2006, we are capable of achieving a greater victory in any coming war. This is the message of the July war.” Nasrallah promised a “big surprise” in any future war with Israel.

The Hezbollah leader did not comment on Wednesday’s terror attack against Israeli tourists in the Bulgarian city of Burgas, which Israel believes Hezbollah may be responsible for, instead focusing on the suicide bombing in Damascus earlier in the day which left three members of Syrian President Bashar al-Assad’s inner circle dead, including the Syrian defense minister and Assad’s brother-in-law, the deputy defense minister.

Nasrallah said the Syrian bombing victims were “comrades” in the struggle against Israel.

“We reiterate our call for preserving Syria and the only solution is accepting dialogue. As we feel the loss of today’s martyrs, we extend our condolences to their families and to the Syrian leadership. These martyr leaders were comrades-in-arms in the conflict with the Israeli enemy and we are confident that the Arab Syrian Army, which overcame the unbearable, will be able persist and crush the hopes of the enemies,” he said.

“Israel has every right to be happy. Israel can be happy because pillars in the Syrian army today were targeted and killed.”

“It is extremely important that the international community, working with other countries that have concerns in that area … bring maximum pressure on Assad to do what’s right, to step down and to allow for that peaceful transition,” Panetta said. “The violence there has only gotten worse and the loss of lives has only increased, which tells us that this is a situation that is rapidly spinning out of control.”

Panetta said this was all the more reason for the international community to bring “maximum pressure” on Assad to step down and permit a stable transfer of power.

King Abdullah of Jordan warned that Syria was on the brink of a full-fledged civil war and that chemical weapons could end up in the hands of al-Qaida terrorists, French news agency AFP reported.

The Jordanian king told CNN that the bombing was a “tremendous blow” to Assad but not the final one for the regime, which was determined to stay in power.

“This was a tremendous blow to the regime but again, Damascus has shown its resilience, so I think maybe we need to keep this in perspective,” King Abdullah told CNN. “Although this is a blow, I’m sure the regime will continue to show fortitude at least in the near future.”

He cautioned that the threat of civil war in Syria was growing. “If it breaks down, if civil order breaks down to the point of no return, it will take years to fix Syria. I have a feeling we’re seeing the signs of that. The only people that can bring us back from that brink is the president and the regime. This is the last chance they have.”

“Our information is that there is a presence of al-Qaida in certain regions inside Syria, and has been there for a while,” he told CNN. “One of the worst-case scenarios, as we are trying to look for political solutions, would be if some of those chemical stockpiles would fall into unfriendly hands.”

French Foreign Minister Laurent Fabius also commented on the bombing Wednesday saying, “This act is of great importance … Given this degree of violence, it means that it is necessary and urgent to find a political transition that allows the Syrian people to have a government that expresses its aspirations.”

He said France would continue to push for this at the U.N. Security Council, which was due to vote on a resolution to impose harsher sanctions on Syria on Thursday.

British Foreign Minister William Hague echoed his French counterpart, condemning the suicide attack and saying that “all such events increase the arguments for a strong and decisive resolution from the United Nations.”

“I think it is clear that situation is deteriorating rapidly,” he said during an official visit to Lithuania. Syria was threatened with “chaos and collapse,” he said, urging Russia and China to support a stronger resolution in the U.N. Security Council.

German Chancellor Angela Merkel made similar comments, saying in Berlin: “This shows us that it is high time to ratify the next U.N. resolution.”

“My plea to all members of the U.N. Security council is to agree on a common resolution,” she said, adding that only this could help bring an end to massive human rights abuses in a country shaken by civil war.

“The peace plan proposed by Kofi Annan is the best foundation for the political transition process in Syria. It needs more support and thus credibility from all sides. We must punish violations with sanctions from the international community,” Merkel said.

Conversely, Russian Foreign Minister Sergei Lavrov said, “The battle for the capital, the decisive fight [is underway in Syria],” and warned that passing U.N. Security Council sanctions against the country would amount to direct support for rebels and could draw the country into civil war.

“Adopting a resolution against this backdrop would amount to a direct support for the revolutionary movement. If we are talking about a revolution then the U.N. Security Council has no place in this.”

Assad would not freely cede power, Lavrov said. “Instead of calming the opposition, some partners are fostering a further escalation,” he said. “It is a dead-end policy to support the opposition. Assad will not go on his own and our Western partners don’t know what to do about that.”

With violence rising, the West wants Moscow to drop its support for Assad. Along with China, Moscow has repeatedly vetoed action against the Syrian president at the U.N. Security Council.

Lavrov signaled no change in Moscow’s position ahead of a meeting with Annan in Moscow on Tuesday.