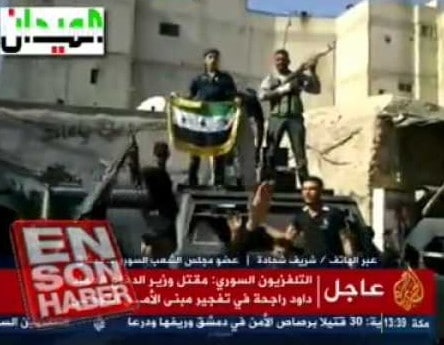 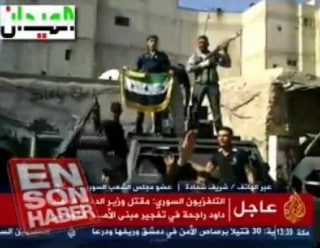 Storming the Bastille in Syria

Henry Lowi calls on progressives with a conscience to declare their solidarity with the oppressed people of Syria, to make every effort “to reach out to the pro-democracy grassroots organizations” there and to “support and strengthen the hand of the pro-democracy and working class currents in the Syrian revolution”.

”The need for international solidarity with the Arab revolutions was felt most desperately in Libya. Much of the international ‘solidarity’ movement boycotted the Libyan insurgents with phony ‘anti-imperialist’ pretensions. The ‘left’ ended up supporting the discredited Gaddafi regime politically, and abandoned the field of ‘solidarity’ to the US and its NATO allies. Now, our impotent ‘anti-imperialists’ are complaining that Libya did not turn out so well. The lesson they seem to be learning from their Libya policy is: ‘Let’s do the same in Syria. Let’s boycott the Syrian revolution. Then, we can blame the imperialists.’” (Henry Lowi)

On 14 July, the anniversary of the glorious French Revolution, Syria is undergoing a popular revolution characterized by mass action and facing ferocious murderous repression by the Assad regime. The popular struggle in Syria is widespread. Demonstrations, large and small, are taking place in all parts of Syria. The regime, using the patently false pretext of “fighting foreign-sponsored terrorists”, is committing one atrocity after another, in cities and towns and villages all over the country.

At the same time, there are clear signs that the Assad regime is beginning to disintegrate, with defections of rank and file soldiers right up to pilots, military commanders and diplomats. At the grassroots level, there are reports of merchants’ strikes. Workers strikes cannot be far off. Unfortunately, the organized Syrian workers movement lacks independence from the regime. The self-styled Syrian “Communist” Party (both factions) is allied with the regime against the Syrian workers. In order for the Syrian workers to influence the insurgency, they will need to coordinate their efforts outside the official channels. Alongside the Local Coordinating Committees, workers coordinating committees will need to be formed.

Of course, the NATO powers, the Gulf kings and emirs, and the Zionist occupiers of Palestine are intervening as best as they can, covertly, in the hope of protecting their selfish interests. Russia and China are doing exactly the same.

The “intervention” that is lacking is the power of the international working class and the Arab revolution, that also have “interests” in Syria: the interests of democracy, freedom, and people’s power.

The Syrian state is one of the products of the post-World War I colonialist partition of the Ottoman Empire. Sykes-Picot and the League of Nations Mandate system gave rise to the artificial states of the Arab East, whose main role was to prevent the unification of the Arab East on a democratic basis. The main beneficiary of this partition was the Zionist colonization of Palestine. But the “regional” Arab regimes, even those proclaiming Arab nationalism, have prevented the unification of the Arabs, and the other Middle Eastern peoples, in the struggle for democracy and modernization. These regimes have acted as the direct oppressors of their own peoples and the guarantors of Zionist domination of Palestine.

The Palestine Liberation Organization policy of “non-intervention in the internal affairs of the Arab states” has always hurt the interests of the Palestine refugees and the struggle for a free Palestine. The Syrian regime under Hafez Assad did imperialism’s dirty work against the Palestinian cause, at the most critical moments, in Lebanon. The Bashar Assad regime played a role in imperialism’s so-called “war on terror”.

The Arab revolutions that began in Tunisia, and spread to Egypt and Yemen and Libya and Bahrain, promise to shake up the oppressive status quo in the Arab East and North Africa. In every country, the social problems and political problems present themselves in different forms. But, in every country the masses of the people confront substantially common problems: lack of a democratic political regime; subservience to imperialism; economic under-development; women’s oppression; ethnic-nationalist and Islamist oppression of non-Arab and non-Muslim populations. The people of Palestine suffer from these, as well as the problems of settler-colonial domination and ethnic cleansing.

The need for international solidarity with the Arab revolutions was felt most desperately in Libya. Much of the international “solidarity” movement boycotted the Libyan insurgents with phony “anti-imperialist” pretensions. The “left” ended up supporting the discredited Gaddafi regime politically, and abandoned the field of “solidarity” to the US and its NATO allies. Now, our impotent “anti-imperialists” are complaining that Libya did not turn out so well. The lesson they seem to be learning from their Libya policy is: “Let’s do the same in Syria. Let’s boycott the Syrian revolution. Then, we can blame the imperialists.”

In the absence of working class leadership, the democratic revolution in Syria risks being derailed and led to oblivion by Islamists and ethnic-nationalists.

So, on 14 July, let us take a stand and proclaim loud and clear:

Forward to liberty, equality and solidarity!

Victory to the Syrian revolution! Solidarity with the workers and farmers!