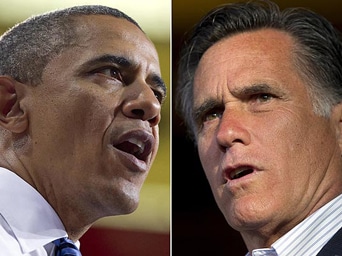 WASHINGTON—As he blames the president for the prospect of large cuts in defense spending next year, Republican Mitt Romney is ignoring the role that Congress and members of his own party played in setting up that possibility.

Romney spoke Tuesday to members of the Veterans of Foreign Wars, one day after President Barack Obama addressed the group. In his remarks, Obama painted an encouraging picture of the additional resources his administration has poured into helping veterans get disability benefits and mental health treatment. But he glossed over just how much those problems have grown during his time in office.

Here is a look at assertions by Romney and Obama to the VFW and how they compare with the facts.

ROMNEY: “The president’s policies have … exposed the military to cuts that no one can justify.” He said the military faces “an arbitrary, across-the-board budget reduction that would saddle the military with a trillion dollars in cuts. … Strategy is not driving President Obama’s massive defense cuts.”

THE FACTS: Actually it was Congress, more than Obama, that set the stage for such a massive cut in the Pentagon’s budget. Last summer’s crisis over increasing the government’s borrowing cap produced an agreement designed to force lawmakers to make the kind of hard decisions that would reduce future deficits. That agreement was passed overwhelmingly by the House and Senate.

Top congressional leaders took the lead in crafting a bargain that included almost $1 trillion in cuts from projected increases to agency budgets over a decade and established a so-called supercommittee to find at least $1.2 in additional cuts. But that panel, which had White House support, deadlocked, leaving the military and other agencies to face the automatic cuts Romney criticized.

ROMNEY: Obama has failed to work with allies to deter aggression, including “the sudden abandonment of friends in Poland and the Czech Republic. They had courageously agreed to provide sites for our anti-missile systems, only to be told at the last hour that the agreement was off. As part of the so-called reset in policy, missile defenses were sacrificed as a unilateral concession to the Russian government.”

THE FACTS: Romney is talking about Obama’s decision, announced in September 2009, to replace a Bush administration plan for missile defense in Eastern Europe that would have placed 10 long-range interceptors in Poland and a radar in the Czech Republic. The Obama administration says it made the changes to better address the emerging threat from Iran’s missile program, not to appease Russia. While Russia initially welcomed the change as less threatening to its interests, Moscow has since ramped up its opposition.

A key part of the new system, a radar, will still be fielded in Poland. The administration also followed through with a related Bush administration deal with Warsaw to station a Patriot missile battery and a small number of U.S. troops in Poland near its border with Russia.

Romney’s claim that the Czech government agreed to provide a site for the system ignores the fact that the plan faced serious domestic opposition and never won the necessary parliamentary approval. Former Defense Secretary Robert Gates, who served in both administrations, once said that the Bush plan “was not going to happen because the Czech Republic was not going to approve the radar.”

OBAMA: Painting an encouraging picture of the additional resources his administration has poured into helping veterans get promised benefits, Obama said: “We’ve hired thousands of claims processors. We’re investing in paperless systems. To their credit, the dedicated folks at the VA are now completing 1 million claims a year, but there’s been a tidal wave of new claims.” He called the backlog “unacceptable.”

THE FACTS: Veterans can be eligible for help with conditions caused or aggravated by their military service. The government, however, has long struggled to keep up with the claims, and the backlog has grown worse during the president’s term in office as soldiers return from Iraq and Afghanistan.

In May 2009, about 135,000 claims for disability benefits had been pending for more than 125 days, representing about one-third of all pending claims. Today, that number has more than quadrupled, to 558,000 claims — about two-thirds of all those pending.

The department’s independent inspector general has said the VA made the problem worse by not assigning enough staff to process appeals and not following its own guidelines in processing older claims.

For example, when investigators reviewed the claims processed at three offices in California, they found that division managers did not conduct monthly reviews of those claims pending for more than a year — a violation of policy that led to unnecessary delays.

In recent congressional hearings, lawmakers from both parties have voiced frustration with the VA’s inability to cut into the backlog despite the additional resources allotted to the task. Obama noted that the VA has redeployed 1,200 claims experts to target and tackle the most complex claims in the backlog. It’s also moving to a paperless system.

OBAMA: “We’ve also focused on the urgent needs of our veterans with PTSD. We’ve poured tremendous resources into this fight.”

THE FACTS: Obama correctly noted that the administration has increased its investment in helping veterans deal with the mental wounds of war, particularly post-traumatic stress disorder. Staffing for counselors, psychologists and mental health workers is up 45 percent since 2005, with the department recently announcing that about 1,900 more mental health workers were being added to the fold.

Investigators explained the conflicting numbers by stating that the VA did not have a reliable and accurate method of determining whether patients were getting timely access to mental health care. They said the VA’s measure “had no real value.”

Obama called it an outrage when he hears about service members and veterans who died waiting for help. “We’ve got to do better,” he said. “This has to be all hands on deck.”