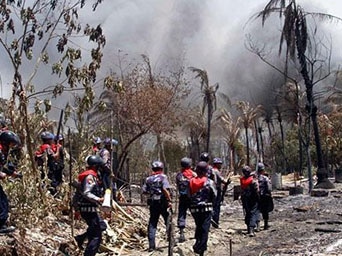 The plight of Rohingyas in Myanmar, the international community and Aung Sung Suu Kyi

Now, the US, the European Union (EU) and others close their eyes to the plight of Rohingyas with the excuse that any intervention may thwart the process of democratization

The latest spate of ethnic violence against the Rohingya Muslim minority perpetrated by Buddhist majority in the Rakhine state of Myanmar has largely been ignored by international media and therefore, very few people around the world are aware of it.

Many of us, living in neighbouring countries to Myanmar, don’t even have a clear idea of what exactly happened to the Rohingya people after ethnic violence broke out in Rakhine state on June 8. The scanty media coverage has mainly shed light on Rohingyas fleeing in large numbers by rickety boat, and pleading for entry into Bangladesh. Due to the heavy blockade by the Bangladesh authorities, these boatloads of haggard Rohingyas failed to land ashore in Bangladesh and were forced to turn their boats back to Myanmar with hunger, thirst and possible death ahead of them.

One heart-breaking picture shared hundreds of times on Facebook, Twitter, and other social media shows a Rohingya man pleading with officers of the Bangladesh Border Guards with folded hands and a weeping face for shelter in Bangladesh. It clearly invokes the suffering of those targeted in the recent week of sectarian violence in Myanmar. However, this is not the first time that Rohingya people have fled across the border to neighbouring Bangladesh to escape the violence in Rakhine state.

In 1978, over two hundred thousand Rohingyas fled to Bangladesh when the Myanmar government launched an operation under the code name of ‘Naga Min’ (Dragon King) to expel illegal immigrants from its territory. The operation particularly targeted the Rohingya Muslims through killing, widespread rape, looting, forced labour, arbitrary arrest, burning homes and religious sites. Again in 1991-1992, nearly a quarter of a million Rohingyas took shelter in Bangladesh, following a dramatic increase of forced labour, torture, rape and summary executions committed by both Myanmar military and local Rakhine Buddhists. The ultimate purpose of these heinous crimes against Rohingyas was to make them invisible in their motherland.

Although the Rohingya Muslim people have been living in Myanmar since the 8th century, they are seen as illegal immigrants from Bangladesh by the Myanmar government and have been denied citizenship for decades. It is an unfortunate fact that the local Rakhine Buddhist population is heavily mis-led by their military government into considering the Rohingyas as aliens and treating them with hostility. There is, in fact, well-documented evidence that Rohingyas were once legitimate citizens of the Union of Burma under Article 3 of the Aung San-Attle Treaty (1947) and the First Schedule to the Burma Independence Act, 1947. They even had their own political parties and representation in the parliament, cabinet and peoples’ councils of different levels during the democratic period from 1948 to 1962. But in 1982, twenty years after the coup d’état, General Ne Win’s military regime redefined the citizenship law which has made the Rohingyas effectively stateless.

Apart from being stateless, they are subject to ongoing restrictions on their fundamental rights. The United Nations has described the Rohingyas as the most oppressed ethnic minority group in the world. The question is, what role does the international community play in stopping the systematic repression of the Rohingya population? The simple answer is none! In the past, the US, the European Union (EU) and others have kept their mouths shut, letting the military regime do what they want. Now, they close their eyes to the plight of Rohingyas with the excuse that any intervention may thwart the process of democratization.

As the current president Thein Sein is pro-reformist, now is surely the right time to apply international pressure to his regime to ensure recognition of the rights of the Rohingya people. Analysts say the international community will not intervene now because they are afraid of losing their possible investment in Myanmar’s oil and gas sectors. Thre is only one recourse: to raise global awareness of the citizenship rights and other basic human rights of the Rohingyas.

This may in some way influence the international community to do something about the Rohingya issue. The Nobel peace laureate Aung San Suu Kyi can play a very effective role in this regard by speaking up for the rights of Rohingyas in different international forums. However, it is disappointing that Suu Kyi has not expressed a very clear position on the stateless Rohingyas. She didn’t even address the issue in her recent 40-minute Nobel oration at Oslo.

The Rohingyas, along with many others, hoped that the democracy icon would raise the issue of their plight during her two-week tour of Europe. But Suu Kyi’s Oslo press conference on June 18, 2012 offered a balancing act on the Rohingya issue. She herself is not sure about the nationality status of Rohingya Muslims. She said:‎”Bangladesh says that they are not ours and Burma says that they are not ours and these poor people get shuffled around. So we have to have rule of law, we have to know what the law is and we have to make sure that it is properly implemented.”

This is, of course, a statement by Suu Kyi trying not to offend the military government and also the majority Buddhist community. She is in fact fully aware that the current law does not recognize the Rohingyas as citizens of Myanmar. Nicholas Farrelly, a research fellow at Australian National University, says that if she fails to tackle the subject she will risk disappointing those who “crave her leadership”. Yet support for the Rohingya, “risks alienating some Burmese Buddhists”. But as a veteran human rights defender, can she remain silent on the sufferings of her own people? She must act now to curb the long-running sectarian violence against Rohingyas and also to find a rational solution to the complex citizenship issue, by involving the local Rakhine Buddhists, different ethnic groups, the military government as well as the international community in seeking a solution.

Ishak Mia Sohel is an Independent Analyst and resides in Dhaka, Bangladesh. He previously worked at the Tampere Peace Research Institute (TAPRI), Finland