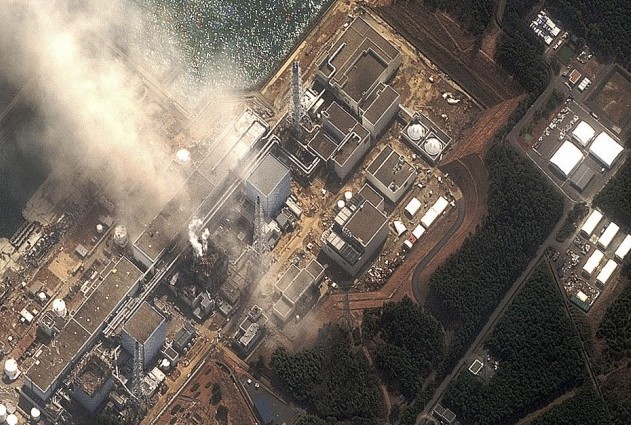 The violent extinction level event occurred Mar 11, 2011. The deadly meltdown and dispersion of radioactive fuel throughout the world is on-going to this day.

Because of the nature of long-lived and short-lived radioactivity, this summation of the radioactive Fukushima inventory is valid for many years. Dr. Scampa’s inventory is current as of Friday, June 29, 2012.

There are 1,946 radioactive products produced by nuclear weapons and atomic reactors according to the Oak Ridge Nuclear Weapons Lab in America.

Nine hundred ninety-three (993) radioactive isotopes are considered dangerous and undergo radioactive decay within eight days; they are not included in this analysis.

Dr Scampa’s article is available to French speakers and all who wish to review the original French here.

I am solely responsible for any and all translation errors.

(European Union) – In light of the recent facts so testified of the medium rates of effective combustion (23.35 GwJ/t) and of enrichment (3.7%) of the reactors 1, 2, and 3 of Fukushima Daichi advanced by a team of Japanese nuclear physicists,  after numerous rough sketches of reduced numbers, AIPRI is finally in condition to present a realistic inventory of fission and activation products of the 257 tonnes (1) of fuel in the three eviscerated reactors at Fukushima Daiichi. (Radionuclide Release to Stagnant Water in Fukushima-1 Nuclear Power Plant. See below.)

Alas, contrary to our reductive conjectures from the past there are many more fission products and long-lasting activation products than we had all too optimistically imagined.

It is not 3.7 tonnes, but instead more than 6 tonnes of material that was subject to fission; it is no longer 2.1 tonnes, but 2.8 tonnes that have been activated into heavier radioactive elements. To our great regret, the potential content of long-lasting radiotoxicity is well above our original estimates.

[See spreadsheet No 1, the first of six.] 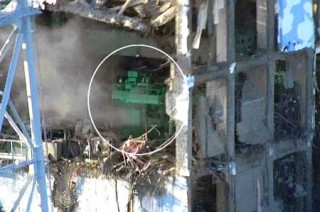 The three melted reactors combined in Fukushima Daichi contained 257 tons of nuclear fuel enriched to 3.7% Uranium 235 and divided into 1,496 assemblies,  each about 172 kg.

In addition, the storage pools of these reactors have at least 239 tonnes of fuel residing there for who knows how long (1,390 assemblies) and 31 tonnes of fresh fuel (180 assemblies).

The activity attained by a radioactive element in a fuel is found to be that number of fissioned atoms per second with a constant * the total product of fission of the element being considered * e(t -λ) the probability factor 1-e(t – λ) is 1 in the case of perfectly balanced elements. NB. t is the time spent in the reactor.

The day of the earthquake their fuel was consumed according to the article cited at an average of 23.35 GWd/t at a rate of 24.07 kg/t for a total of 6.186 tonnes of fuel fissioned. 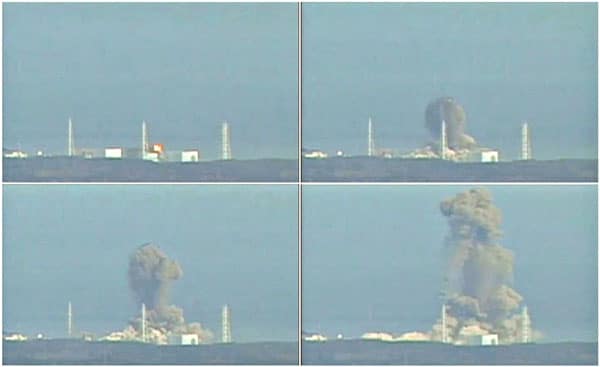 At the time of the accident, there remained around 3.14 tonnes of fission products of the 6.19 tonnes produced over the course of time.

Overall, 9 tonnes of fuel was subjected to atomic fission or activation transformation occasioning a prodigious explosion of radioactivity and radiotoxicity which over time, is several times the amount needed to kill by internal contamination the whole human race.

The atomic factory disemboweled and fanned out

The most remarkable of the volatile elements (elements of which the boiling point is inferior to 1,500 degrees Centigrade and escape above all the first coriums). 37,921 PBq; 1 billion Ci; 18 billion potential inhaled lethal doses.

The official report of the Japanese government to the IAEA [International Atomic Energy Association] contains a hypothesis that the emanations of nuclear fuel from Fukushima Daiichi are equivalent to the ones observed at Chernobyl.

We can see by comparing the subsets of figures below that the radioactive particle emission through the air from Fukushima is not only 3.7 times higher than Chernobyl; but, more importantly, 28.3 times more radiotoxic with every breath you take.

Copyright 2012 by Bob Nichols, All Rights Reserved. Republishing allowed with all Sources and Notes included.

(2) A single MWE is defined as One Million Watts of Electricity.

Dr Scampa’s first included spreadsheet from the AIPRI article. There are six total.