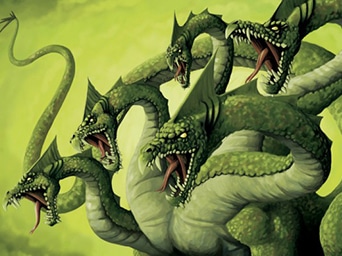 In ancient Greek mythology, the Hydra had the body of a serpent and from five to nine heads. If a head was severed, another would grow in its place.

Members of Congress Michele Bachmann, Trent Franks, Louie Gohmert, Thomas Rooney and Lynn Westmoreland, all Christians, were presumably taught to practice brotherly love. Nothing in Christian lore says brotherly love is reserved only for other Christians.

Yet these five members of the US Congress wrote a letter castigating a highly respected member of the State Department because she is Muslim. They alleged that Huma Abedin, a top aide to Secretary of State Hillary Clinton, is part of a Muslim Brotherhood campaign to infiltrate the American government.

The actions of these Christians equal a deliberate breach of faith, calculated violation of trust, and treachery.

The Five Members of Congress, who all have important positions in the House of Representatives, also called for an investigation of the infiltration and influence on government agencies by the Muslim Brotherhood.

The letters sought answers about the U.S. government’s involvement with the Muslim Brotherhood, a group that they claimed calls for “civilization jihad.”

They explained that the U.S. government in federal court has established that the group’s mission in the U.S. as “destroying the Western civilization from within.”

They requested a formal investigation or evaluation of the extent to which Muslim Brotherhood-tied individuals or entities are involved.

“The national security of our country depends on getting straight answers from the Inspectors General to the questions we posed in these letters,” complained Bachman.

She added, “The Muslim Brotherhood is not shy about their call for jihad against the United States. We seek answers through these letters because we will not tolerate this group and its affiliates holding positions of power in our government or influencing our nation’s leaders.”

Gohmert said, “Evidence indicates that this administration continues to bow before groups associated with the goal of ‘destroying Western civilization from within,’ and about whom the 5th Circuit Court of Appeals has found that there is plenty of evidence indicating that they support terrorism.”

These five-headed Hydra not only shares a stench from the pretence of being principled Christians; they are propagating a hate crime against Muslims.

Mitt Romney, the Republican candidate for the presidency, refused to speak out against these extremists. Romney’s Islamophobic foreign policy adviser John Bolton, however, defended Bachmann’s call for the government to investigate the alleged Muslim Brotherhood plot.

As one commentator said, “Tell Speaker Boehner to remove Bachmann from the House Intelligence Committee before her reckless politics damages our national security.”

Will someone please educate these bigots about Islam?