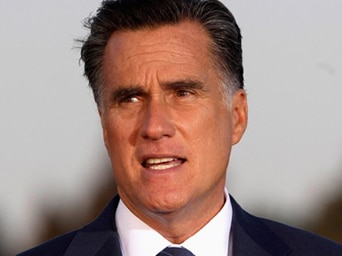 Special Note: Mitt Romney ( not sure a Mormon or a Moron ) claimed Israel as “divine providence” faulting Palestinian culture as a cause of their situation. Of course Palestinians are not the Dracula’s of financial raiders as Romney is. Of course Palestine was in bloom way before the Zionist invasion. Give any “Moran’s” the trillions Israel got and they will make the Moon bloom. Mitt Romney, your defeat will be a truly “divine providence”. Sami Jamil Jadallah

By Zahi Khouri, Published: August 9
Published by the Washington Post

I am a proud American. I am a hardworking businessman and job creator. I am a faithful Christian.
And I am Palestinian.

Much as my multiple identities might drive Mitt Romney to head scratching, it is he who needs a lesson in, to borrow his recent words, “culture and a few other things.”

Were he to spend a day with me in the Holy Land, I could take him to the Jerusalem neighborhood where my family home has stood for five centuries. I could show him the orange trees in Jaffa that my family helped introduce to the world in the 1930s.

That’s right: Jaffa oranges are a Palestinian, not Israeli, trademark. Yet like so many “cultural” markers claimed by the self-professed Jewish state, even the fruit trees my people have tended for centuries have been expropriated.

Romney might be duped into thinking that oranges, falafel and hummus — staples of Palestinian cuisine for generations — are Israeli products. But how dare he claim that a state built at the expense of another people’s history and accomplishments is guided by “the hand of providence”?
Israel did not make the desert bloom. Instead, thanks to a deal struck with the British viceroys of Mandate Palestine, it made away with a land, a set of institutions and, indeed, a culture that was not its own.

It did so at the expense of my people. Like more than three-quarters of Palestine’s population, my family was forced to leave this land after Israel’s creation in 1948. Even though we had to abandon our successful businesses and centuries-old homes, however, we did not become the “uncultured” victims that Romney’s caricature suggests.

Most of us went to other Arab countries, where Palestinians became known for our business acumen and management know-how, and helped to build nascent private and public sectors. Ask our fellow Arabs in Lebanon, Jordan or elsewhere in the Persian Gulf region and they will tell you: Palestinian culture, with its premium on education and hard work, has been a force for hope, development and prosperity.

Despite their circumstances, Palestinians living under Israel’s brutal occupation share the same culture and proudly claim the same remarkable achievements. I, for one, returned to Palestine in 1993 to launch the first Coca-Cola bottling plant in the West Bank. It was granted a Best Country Bottling Operation award in May by Coca-Cola, a testament to my colleagues’ ingenuity and determination. But these traits alone cannot overcome the stifling effects of Israel’s occupation.

If Romney got one thing right, it’s that Israelis far outdo Palestinians in net wealth. In fact, his estimates of the disparity were too conservative: Israel’s per capita gross domestic product is roughly $32,000 to the Palestinians’ $1,500.

Remarkably, that $1,500 figure is roughly half of what Palestinians claimed in 1993, when the Oslo accords were signed. In other words, the U.S.-sponsored peace process has made us poorer.

How is that possible?

Palestinians have no say in our economic development. Every resource — water, land, soil, minerals, airspace, humans — is controlled and commandeered by Israel, which then deigns to sell us back a small portion.

Palestinians have no control over our borders. This means we cannot import or export without being subject to discriminatory measures by our occupier. It also means that, without Israeli permission, we cannot hire experts to enhance our employees’ skills or send employees for overseas training.

Worse, we are restricted within the territories ostensibly under our “control.” At any given time, there are more than 500 Israeli checkpoints, roadblocks and other barriers to movement within the occupied West Bank — an area smaller than Delaware — hindering Palestinians and their goods from moving between their own towns and cities and the outside world.

Palestinian development of all kinds is severely hindered by the Israeli occupation. Yet Palestinians have not given up. Palestine has one of the highest literacy rates in the Arab world. Our youth continue to graduate from our universities, opening businesses and gaining skills. Our private sector innovates and grows.

All of this is happening on the 22 percent of historic Palestine that is the West Bank and Gaza. If Romney had any historical perspective, he would dispose of his racist judgments about Palestinian culture and instead imagine our potential without Israel’s imposed hindrances.