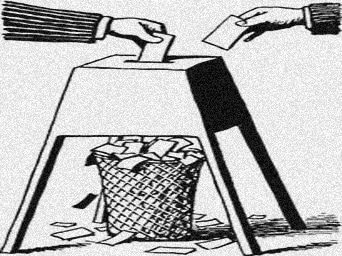 10. You can pretend to help decide which CIA-groomed figurehead will front for the banksters during the next four years.

9. If the rigged voting machines break down, your vote might actually be counted.

8. With a bumpersticker like “Don’t blame me, I voted for Cynthia McKinney” (or your favorite 3rd party candidate) you’ll feel superior to the sheeple for the next four years.

7. Poking little holes in computer cards is good exercise for the muscles in your hands and wrists – and since you only do it every four years, you won’t get repetitive motion syndrome.

6. Voting offers an opportunity to do your civic duty: While standing in line waiting to vote, you can hand out 9/11 truth DVDs and explain to the sheeple that if voting changed anything, they’d make it illegal.

5. If each of the two major party candidates gets exactly fifty million votes not counting yours, your vote will determine which candidate can brag about getting the most votes. Unfortunately, due to the mysteries of the electoral college system, getting the most votes has nothing to do with being elected President.

4. You’ll get to play a minor role in an outrageous, over-the-top farce, without having to get yourself hired as an extra in a Mel Brooks movie.

3. Since your vote has no effect whatsoever on the actual governance of the nation, you can go ahead and vote without feeling guilty about the mass murders and genocide that the government is guaranteed to keep right on perpetrating, regardless of the electoral outcome.

2. You can cast a write-in vote for a relatively honest president of some relatively honest country, like Hugo Chavez or Fidel Castro or Mahmoud Ahmadinejad, and hope that your local newspaper will mention it along with the write-in votes for Donald Duck, Ted Nugent, Ted Kaczynski, OJ Simpson, and Mishka the Talking Dog.