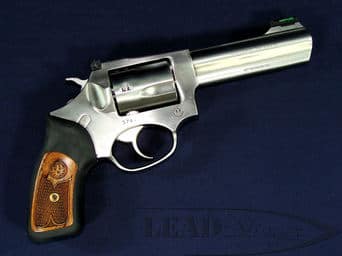 “Any man in combat who lacks comrades who will die for him, or for whom he is willing to die, is not a man at all. He is truly damned.” …author/historian William Manchester, USMC, Goodbye Darkness.

Charles Ronald Conner got into a dispute with a neighbor about his dogs. By the time it was over, the dogs, the neighbor and his girlfriend were all dead, shot with Conner’s 9mm.

Conner then grabbed a lever action, scoped 30-30 rifle and took up a position to add a few of the responding police officers to the bad day he was having.

Sgt. Means, the first responding officer, despite his  having an AR-15 was pinned down in a bad position.

Despite the distance Vic Stacey knew he had to take the clear right flank shot that he had with his 5″ barrel 357 magnum. Vic estimated he was 165 yards out.

But as you are about to hear, that was not a problem for ole Vic.

His first round got the double murderer in the thigh and put him down, but the guy amazingly chambered another round and got a shot off at Vic that almost got him. Vic fired four more times, got four more hits as the officer got the range and finally killed the shooter.

This video is a slice of Texas. What do I mean by that? Well, most people who have pistols, even those who are really good, I don’t know a soul that can shoot accurately at that range. Heck, I don’t even know anyone who has even has even practiced at that range.

But we know Mr. Vic Stacey has. As the saying goes, owning a gun, and being able to use it are two entirely different things.

We have readers who may think that I am glorifying the taking of a life with this piece. They just don’t get it, because it is just the opposite.

Any of you combat vets out there who have had your butts pulled out of what you thought was a one way ticket to hell, due to the shooting skill of a buddy or a stranger, you know exactly what I mean.

Gordon ‘gets it’, because he got it. One day in Nam he got caught as the last man out during a pull back.

He found himself in a French colonial cemetery behind a grave stone that an NVA 50 cal gun crew was methodically mowing the top down to their ultimate prize…his head.

Out of the blue an APC pulled up beside him, the shirtless driver popped out the top and assumed a three point firing position with his carbine and engaged the 50 cal crew. You all know that he was successful, and I can share with you that Gordon had the pleasure of meeting him years later.

You can read this great Nam story in ‘The Last Bayonet Charge’, where the Dufster almost got his name on the Vietnam Memorial Wall.

Glorifying the saving of some lives by skilled marksmanship?…you bet your behinds we glorify it, and always will. Time now for Vic to fill you in on the details.

And yes, the shooter killed two people because their dogs were pooping in his yard. He had a clean record, but obviously some coping problems. And as more Americans find themselves living in RV parks we may see more senseless killings like this.

Last I heard was that even if a magnum round did not kill you, the shock alone would take you out of action. This bad guy was one tough character, or the magnums lose their punch at that range.

The wrap on this story is they had the right man, in the right place, at the right time, with the right skills.

Sheriff Grubbs commended the assisting resident for his actions. Law enforcement has determined that the resident acted valiantly and perhaps saved the lives of Sgt. Means and responding deputies, Grubbs said.

“His actions may have also saved the lives of other citizens who could have innocently walked into the situation. Under fire, the resident shooter returned fire at precisely the right moment. One of the rounds struck Conner in the thigh and staggered Conner as he turned fire on Sgt. Means,” said Grubbs.

“This staggered Conner from having an effective aim as Conner fired upon Sgt. Means. This also enabled Sgt. Means to accurately return fire on Conner.”