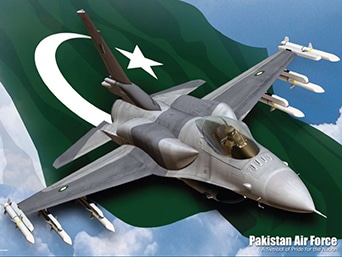 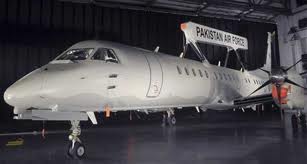 Pakistan Air Force Base at Kamra was attacked in the very early morning hours today. Kamra, besides an Air Base, is Aeronautical complex also where PAF not only produces her latest JF 17 Aircraft but also has the rebuild facility for its entire weapon system.

Attack on Kamra is continuation of previous attacks on GHQ where the attempt was to take General Ashfaq Kayani as hostage and at PNS Mehran where the P3 C Orion Anti Submarine warfare Surviellance Aircraft were the target. At Kamra, SAAB 2000 the Early Warning Aircraft Sytem equipped with the latest techonology were the target.

The attack took place at 0230 hours when people were generally suppose to be busy with preparations of fasting. The date and time by the attackers was very carefully selected as it being the 27th of Ramadan on which night the maximum number of Muslims try and pray the whole night. Thinking that at this time all would be on low guard, the attackers tried to enter the base in PAF uniforms. The security guard Mohammad Asif having sensed the foul play shot dead one of the attackers who was later identified from Central Asia. Later the security guard was shot dead by the other attackers.

With this everone was alerted and everything moved in very swiftly to defend the base successfully. Air Commodore Mohammad Azam who moved in immediately to lead the operation got a bullet a bullet in his shoulder. Likewise an injured Squadron Leader who crawlled to put out the fire from a random firing that damaged a SAAB 2000 Aircraft.

The PAF spokesperson when contacted on telephone informed that PAF Chief Air Cheif Marshal  Rafiq Butt immediately at 0230 hours took over the entire operation for its logical conclusion.

All the eight attackers have been killed, the operation has concluded successfully for which the PAF desrves a commendation.

Prior to this report, I had written an analysis of the incident that is placed below. 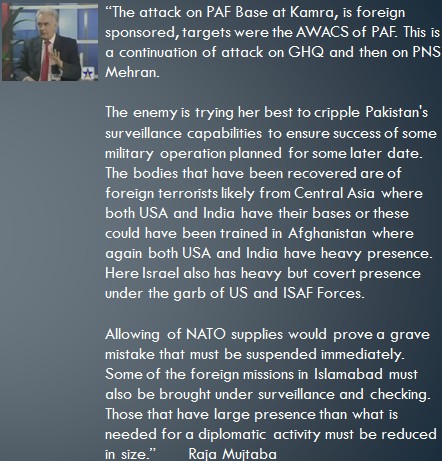