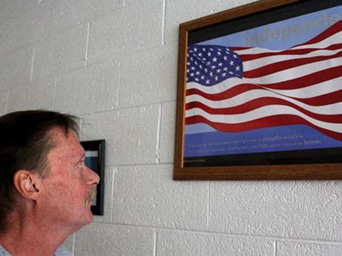 Veterans filing for benefits with the US Department of Veterans Affairs are standing in line.

For 61-year-old Grand Haven resident Fred Lemieux, it took about 18 months before he began receiving compensation for serving in the U.S. Army Americal Division.

“It’s frustrating because it takes so much time,” he said.

Lemieux served in Vietnam and was in the Battle of Fire Support Base Mary Ann in 1971.

Another factor was adding conditions that added about 30,000 claims overnight, Wells noted.

“A lot of things are culminating at the same time to create that log,” Wells said.

While there’s about an 18-month wait for traditional claims, Wells said veterans are encouraged to file a fully-developed claim. That type of claim requires veterans to do the work upfront because there is sometimes a faster decision made — sometimes in four to six months.

Wells said there’s hope that Veterans Affairs will move quickly in the future, as they are transitioning to a virtual file program called Veterans Benefits Management System. It allows more than one person to access it at a time.

Although it was challenging to obtain compensation at first, Lemieux said it gets easier once someone is in the system.

As for veterans filing benefit claims, Lemieux has advice.

“You’ve just got to stick to your guns,” he said. “It’s what you earned. It’s what they promised you.”