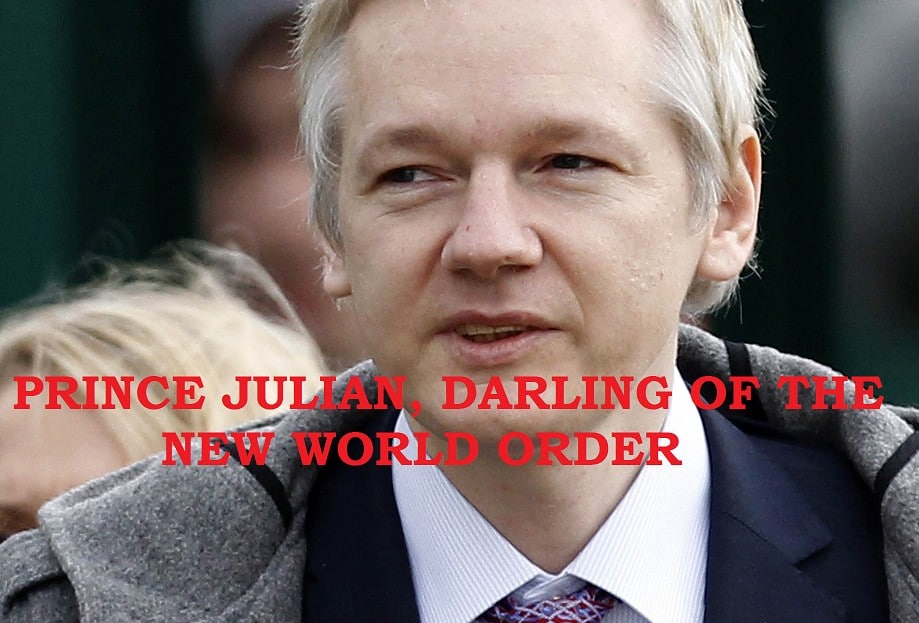 There is NO Move by the US Against Assange, Darling of the Right

Assange, for those, many my own friends, who are too dumb to find their cars in their own driveway, is wanted for sex crimes in Sweden, not even a NATO country.  After all these years, there has been no legal action against Assange in the US, none threatened, none planned, all just made up.

Netanyahu personally vouches for Assange, the power of the Washington Israel Lobby, perhaps the most dangerous force on earth, continues to serve Assange.

Why would someone who released all of his material sifted and, according to Zbigniew Brzezinski, actually written by AIPAC and the Mossad, then again by the New York Times, be an enemy of the NWO?

Assange may be running the whole thing, after all, he is a 9/11 holocaust denialist, advocates the persecution of the Palestinian people openly, advocates war on Iran openly, is silent on drug running in Afghanistan and, though he has leaked material, follows Pentagon policy as though he were drawing a pay check.

As for the Wikileaks website itself, it has no material of interest.  Assange only gives material to his “handlers” who release what the rich and powerful want released, when they want it released and much of that material has been proven to have been created, as Brzezinski calls it in this VT article from December 10, 2010:

“This week, Judy Woodruff of PBS interviewed Zbigniew Brzezinski and Stephen Hadley, former national security advisers for presidents Carter and Bush.  The subject of the interview was Wikileaks.

Such interviews seldom reveal much, though Brzezinski is one of the most controversial figures of our times, tied to endless conspiracies and rumored to head many of the secret societies tasked with maintaining the New World Order.

The interview is available in full at PBS.  For the most part, Hadley offers little or nothing of substance, much as when he served as national security adviser to President George W. Bush.  Brzezinski, however, is another beast entirely.”

The interview is edited, with little exception, as monologue by Brzezinski:

The real issue is, who is feeding Wikipedia on this issue — Wiki — Wiki — WikiLeaks on this issue? They’re getting a lot of information which seems trivial, inconsequential, but some of it seems surprisingly pointed. …The very pointed references to Arab leaders could have as their objective undermining their political credibility at home, because this kind of public identification of their hostility towards Iran could actually play against them at home.

Editor’s note:  The use of the term, “pointed” is key.  This indicates two classes of information and also begins building a hypothesis to support “intent.”  If there is “intent” in the leaks, then they are an intelligence operation, not a leak.

It’s, rather, a question of whether WikiLeaks are being manipulated by interested parties that want to either complicate our relationship with other governments or want to undermine some governments, because some of these items that are being emphasized and have surfaced are very pointed.

Editor’s note: Brzezinski goes exactly there, indicating his belief that Wikileaks is tied to an intelligence agency.  This is a full and direct challenge to the credibility of Wikileaks showing no reservations whatsoever.

For example, leaving aside the personal gossip about Sarkozy or Berlusconi or Putin, the business about the Turks is clearly calculated in terms of its potential impact on disrupting the American-Turkish relationship….the top leaders, Erdogan and Davutoglu and so forth, are using some really, really, very sharp language.

JUDY WOODRUFF: But this is 250 — it’s a quarter-of-a-million documents.

JUDY WOODRUFF: How easy would it be to seed this to make sure that it was slanted a certain way?

ZBIGNIEW BRZEZINSKI: Seeding — seeding it is very easy.  I have no doubt that WikiLeaks is getting a lot of the stuff from sort of relatively unimportant sources, like the one that perhaps is identified on the air. But it may be getting stuff at the same time from interested intelligence parties who want to manipulate the process and achieve certain very specific objectives.

Editor’s note:  Brzezinski’s assertion is that “chickenfeed,” things off the news, low level “junk” intel is being “seeded” by an intelligence service to serve an agenda with “very specific objectives.”  Can anything be more clear?

STEPHEN HADLEY :  The — what we know or what has been said publicly is it looks like a data dump through a pretty junior-level person. So, in terms of that material, it looks like a data dump. Generally, in Washington, I have had the rule that, if there are two explanations, one is conspiracy and one is incompetence, you ought to go with incompetence. You will be right 90 percent of the time.

Editor’s note:  The Obama administration withdrew the AIPAC spying convictions when it was clear that Stephen Hadley would be put on the stand by the defense.  Hadley’s very close relationship with the defendants in this spy trial brings up a number of interesting questions which are not hard to answer if you read his response above.

ZBIGNIEW BRZEZINSKI: But, Steve, the other foreign intelligence services don’t have to wait for me to make that suggestion.   I think they can think of it themselves, particularly after the first instance.

Wikileaks to intelligence professionals is very simple.  It is an Israeli “cover and deception” program, run by them, financed by huge money, backed by Rupert Murdoch, the ADL, AIPAC and continually advocating right wing causes in the US, pushing for world war and covering for serious war crimes while reporting only select minor ones.

Secondly, much of Wikileaks material is simply invented, as a way of planting phony stories in the news.  With the bulk of material, some of it useful, I have managed to turn some of it around and use it against Assange and the NWO he represents.  That’s our job.

As for his personal life and sexual proclivities, that is a criminal matter in Sweden, between him and his alleged victims and the gang of billionaires that he represents.

Right now, Assange is taking front page on the controlled press across the world, all on command from Tel Aviv.

Here in the US, he got a couple of conveniently timed threats from half baked right wing nuts who take orders, minute by minute, from Netanyahu, Assange’s best friend, so as to make him look like a “victim,” the same way Israel tries to look when dropping cluster bombs on schools in Gaza.

Assange is a joke.  Let him go to Ecuador, I hear the weather is lovely this time of the year.  He doesn’t want to go, of course.  To me, such an act makes me think he might actually be guilty of something in Sweden.  As I am not a public official, I can say that much.

It’s one thing when the mainstream media gets its marching orders to spread conspiracy theory about the non-existent “witch hunt” over Assange.

Poor Bradley Manning was thrown to the wolves, blamed for crimes he could never have committed, especially documents from multiple departments, overseas embassies and so many things made up by an army of fabricationists in Tel Aviv.

The real suckers are the “anti-imperialists,” those willing to follow any scoundrel as long as they claim to be against the US and “NATO” although there is no evidence other than, as we point out so often, claims in the media that no “anti-imperialist” would ever admit to reading.

Problem is, they do read it, they are “sucked in” by propaganda and are the biggest pack of “tools” and “dupes” in the world.

As for Assange, he is the “mini-me” of Netanyahu, a Romney supporter, Islamophobic, right wing, anti-Palestinian, pro-war and 9/11 holocaust denialist.

Wikileaks, whose organization with its $50 million dollar servers. once successfully duping the world, pushing it toward war and providing cover for real imperialism, is trying to make a comeback with a new drama, deflecting the truth of sex crime charges and trying to make them look like what is an imaginary “extradition” to the United States.

When the US wants someone, they use rendition, a claimed right, and can get anyone they want, anywhere.  If all the intelligence services in the world want Assange dead, why is he the safest man on earth?