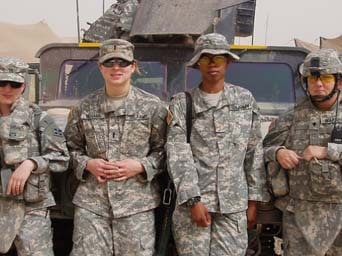 In August 2005, Army Lt. Jas Boothe had one thing on her mind: getting herself – and the son she was raising on her own – ready for her deployment to Iraq.

But a phone call and a doctor’s visit a few weeks later changed everything. Boothe, who was 28 at the time, learned her home had been destroyed by Hurricane Katrina. Soon after that, she was diagnosed with cancer in her head, neck and throat.

“So, now there is no deployment, there is no home and now I’m facing losing my military career, which is how I take care of my child,” she said in a recent interview.

She began to research housing options. The Veterans Affairs Department referred her to social services, where she was told she qualified for welfare and food stamps.

“There were a ton of services, housing facilities for men, but someone had forgotten about the women,” she said. “Our sacrifice was not equated to that of the males’ sacrifice, and that was shown in the level of services that we didn’t have.”

After 30 radiation treatments and two surgeries, the military cleared Boothe for duty. Now a captain in the Army National Guard, she was able to stay in the military, afford a home and support her son. But her experience taught her that there were likely other women veterans with nowhere to turn.

VA has made it a goal to end veteran homelessness by 2015. An estimated 67,495 veterans were homeless on a single night in January 2011, a 12 percent drop from the year before, according to VA.

But the number is expected to grow as more service members return from Afghanistan over the next two years.

A lack of options

VA has developed many programs to combat homelessness among veterans. The Grant and Per Diem Program provides funding to community groups that offer veteran services and housing, and the Housing and Urban Development-Veterans Affairs Supported Housing Program gives veterans vouchers for housing.

Yet these programs have significant limitations and problems when it comes to serving women, according to the GAO report.

The GAO found that more than 60 percent of the GPD housing for women either does not allow children or limits the number or ages of children accepted. Housing and service providers are also not compensated for the cost of housing children, creating a financial disincentive to accept families, according to the report.

The report also pointed to instances of unsafe living conditions for women and their families. “Nine of the 142 GPD programs we surveyed indicated that there had been reported incidents of sexual harassment or assault on women residents in the past 5 years,” wrote Daniel Bertoni, GAO’s director of education, work force and income safety issues.

Many homeless female veterans are single mothers, leaving them with nowhere to go if they cannot find housing that also allows their children, said Boothe, who started Final Salute Inc. to give female veterans somewhere to go. She runs a six-bedroom transitional home in Fairfax, Va., for five women and two children.

Female veterans become homeless for a number of reasons.

VA has experienced a large increase in disability claims filings, overwhelming its benefits system. Veterans often must wait weeks or months to claim their benefits, which can sometimes lead to homelessness, advocates say.

Post-traumatic stress disorder plays a significant role. Almost 20 percent of female veterans who served in Iraq and Afghanistan have been diagnosed with PTSD, according to VA. PTSD can stem from both sexual trauma and exposure to combat.

“I know female double amputees. I know women who are severe burn victims,” Boothe said. “There are no more front lines in war.”

The Rev. Helen Stafford Fleming started the Women’s Veterans Resource Center at Douglas Memorial Church in Washington, where she works to set up veterans with the services they need. She said PTSD is evident in many of the women she meets, and their condition may make it difficult to keep a job and support their children.

Many of the female veterans she meets also don’t know what resources are available to them, she said.

“They don’t even consider themselves veterans,” she said.

Fleming believes it is a terminology issue in which “veteran” has become associated with men. Some women believe that services for veterans are for only those who saw direct combat, according to the GAO report.

Many female veterans Fleming meets have also become frustrated by the complexity of the benefits system.

“They get caught up in the system and they don’t go back because they don’t have transportation money, or they are more worried about where they are going to sleep for the night than they are [about] actually figuring out their benefit package,” she said.

Slow change on the horizon

VA says it is taking steps toward improving services for female veterans. For one thing, it is reaching out to organizations such as Final Salute that uniquely support female veterans, Boothe said.

But the problems will not be solved overnight, and it will take VA some time to change the system to better accommodate women, Boothe said.

Often, homeless female veterans simply need some time and a safe place to help them get back on their feet, she said.

Ashley Dyer, who served in the Army for three years, including a year in South Korea, became homeless last year when a clerical error caused her to lose her benefits, she said. She now lives at the Final Salute home.