Two weeks ago, former National Security Advisor to Presidents Clinton and Bush (43) Gwyneth Todd was featured in the Washington Post.

The crux of the Todd murder plot is simple:  Chow wrote a letter firing Todd and suspending her clearances.  Then Chow and Cosgriff, Admiral Cosgriff, asked Todd to go on a secret mission.

There she was to be murdered in a terror bombing  while the “secret source” Cosgriff sent Todd to meet with a listed terrorist.  The killing would then be blamed on Iran and Chow and Cosgriff were “covered” because Todd had been “fired” first.

Todd is living in Australia but, as of publication, the naval official accused of conspiring in her killing, to be sold to the American public as an Iranian terror attack is “in uniform” and in Australia trying to force the government to silence Todd, who can send “her” to prison for life or worse.

Mike Harris interview Todd.  There are, as of now, four explosive hours of interviews with Harris, the most serious accusations of treason and espionage by  the highest ranking US official yet to come forward.

Several Bush era cabinet officials confirm the accusations which are supported, not just by testimony, featured in the video’s below, but in extensive documentation, wire taps, secret voice recordings and more.

Evidence supports that naval personnel at the highest level, authorized by Vice President Cheney planned the assassination of a top US official, the bombing of US personnel and a staged false flag attack on America’s Fifth Fleet to begin a war with Iran in 2007.

Additionally, top White House advisor, Richard Clarke, is implicated in years of top level spying against the US, lasting well over a decade.  White House officials, including cabinet level officers were advised to stay silent about Clarke’s involvement in spying and aid in the criminal cover up.

Some of us wonder why the fleet was sent up to the Mediterranean to bail out Israel when Hezbollah began chewing up the IDF?  No American news source ever reported this and America’s combat role in Lebanon in support of Israel in 2006 has never been admitted.

[Editors Note: What I see in this video segment is concern dead Somali pirates was more important for the Navy that their reputation with highly trained intelligence and foreign service officers. They were willing to do  a framed up body drop with Gwenyth but dumping these pirates in the sea..oh no…’that would be wrong’…J.Dean]

That story is featured below: 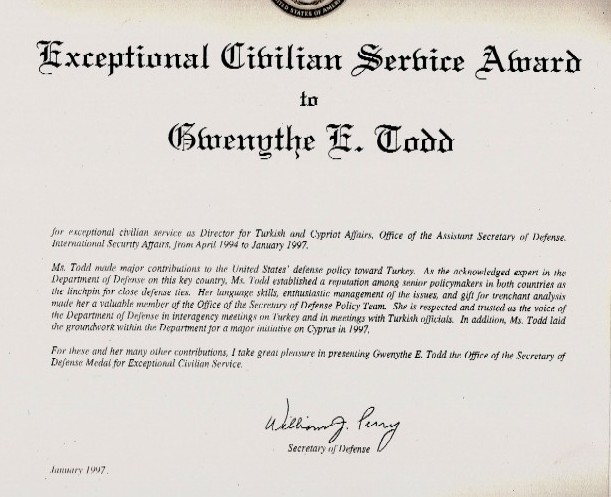 This is December, 2007.  Todd, chief political advisor to the Admiral of the 5th Fleet, is called into Admiral Cosgriff’s office to review highly classified reports of an impending terrorist attack.  Cosgriff orders her to leave the base, unarmed, no security detail, and meet with an “informant.”

However, as we now have learned, Commander Lynn Chow had, even before the meeting, written a letter “disavowing” Todd and ordered the cancellation of her security clearance, “Special Compartmentalized,” well above “Top Secret.”

Sources indicate that Cosgriff, who commanded Chow to “set up” Todd was acting on direct orders from Vice President Cheney. The actions that can be proven show prior planning to send Todd out to be killed in a staged terror attack.

When Todd met the informant, he warned her that he was on a terror list and that they were being directly observed by Bahrain’s secret police. He told Todd to flee immediately as she was going to be killed in a bombing if she stayed.

When she returned to the base, her clearances and ID had been disabled and she was being hunted.

With help of loyal Americans, she got on base, contacted the State Department and warned them of the rogue plot by Cosgriff and Chow. She then, using contacts as the top US intelligence official in the region, fled Bahrain and eventually reached Australia.

Richard Clarke, after leaving government, has been a very public critic of the Bush administration and the handling of the War on Terror.  However, sources advise us that Clarke’s behavior is part of a campaign of “covering his behind” as Clarke’s real history is one totally at odds with the public image he is now portraying.

When military and intelligence officials are questioned, off the record:  “If any Bush official were involved in 9/11 and the “truthers” were correct, who would you name.”

Then many give reasons, reasons with no audience, no grand jury, no commission, just their own suspicions, particularly those who worked closely with him.

Another of our group to seek refuge in Australia was “Hack,” or Dave Hackworth, the Green Beret colonel and good friend who told the US that Vietnam was an unwinnable war.

He was thrown out of the army though he held the following awards and also sought refuge in Australia. We thank the Australian people for their hospitality and ask them to look after Gwenyth for us.

Note: As per a Department of the Army audit conducted by COL Pam Mitchell, Chief Personnel Service Support Division on May 6 1999.