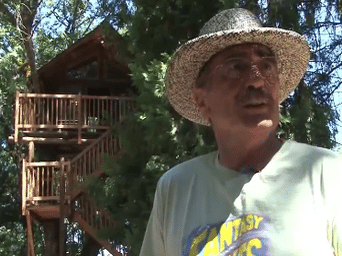 “One of the big things in my life was to try to make a living at something that I liked…on that I didn’t sell out on.” …Mike Garnier

I have a gem for you today folks. Mike Garnier moved to Oregon to put down roots after Vietnam but his desire to make a living working with wood initially ran into one disappointment after another.

Eventually, he raised his sights, literally, to the trees on his property. The rest is now history. He’s the king of Tree House mountain.

Mike owns more tree houses than anyone on the planet. And if you don’t think that’s a big deal, watch the video.

As I began watching the video for the first time myself, I knew right away I was going to feature it on VT just for the great treehouse story alone.

The first bullet quote that had me diving for a notebook was,

“I had to figure out how to make a living off the trees without cutting them down.”

I said to myself maybe we have the spirit of Will Rogers lurking is this old vet. But as I got further into it I saw a gleaming example of what a man looks like who is doing exactly what he wants to do.

The video was a gift from heaven because to use the term ‘looks like’ you have to be able see him and hear the story from the horse’s mouth. We should all be so lucky, and fortunately some of us are.

So tonight we have an adjusted version of VT Weekend Movies in the genre I have used already a few times, climbing into someone else’s shoes and life for a few minutes.

We had a lot of fun doing the one with the UFO Welcome Center in South Carolina. Jody Pendarvis and Mike are both characters, in different ways…but they share a sparkle in their eyes as they take you on their respective magical mystery tours, and never seem bored by it. Mike still serves Fantasy Flakes for breakfast and entertains his guests with his early mechanical psychedelic trip contraption.

But building his own world in the trees involved more than the money, labor and the heart to do it. Mike had to fight the local government for almost ten years before gaining the right to house guests in his nine treehouses. Josephine County building inspectors didn’t believe that it was structurally sound, so he gathered 66 people, two dogs and a cat (collectively weighing 10,847 pounds) in a single treehouse.

Despite this convincing neighborhood test the county demanded that he tear the treehouses down. Mike ignored them, and when they objected to him charging money to stay in the treehouses, Garnier then allowed visitors to stay for free, with the requirement that they buy a $75 t-shirt first.

The resulting legal battle lasted ten years, with Garnier attaching a steel cable zip line to his bedroom window in case of the need for a midnight escape. In 2001, the county relented and granted Garnier his building permits.

The old saying goes, “You can’t keep a good man down”, and that was literally the case  for brother Mike. Our thanks go out to the people that made the video. Print does not do this story justice. Multimedia was invented to serve the internet audience. I hope to be talking to Mike about doing some radio on our VT affiliates.

In 1974, fresh out of the army (as a Green Beret medic), Michael Garnier went to rural Oregon to try to make a living off the woods. He tried making furniture, fences, pole barns and selling organic, psychedelic picture propellers (to see Fantasy Flakes), but finally it was a treehouse that got him all the attention.

Modeled after the treehouse he had once built for his kids, his first treehouse B&B was completed in 1990 and people began paying to stay…

…Today he has 9 treehouses for rent, 20 staircases, 5 or 6 bridges, several platforms and zip lines for rapid descent and at least one fireman’s pole. Some of his treehouses even have toilets, running water and showers, though he warns guests to “stand when they flush”.

Over the years, Garnier has become legend in his industry and helped invent a better way to build a treehouse. Instead of bolting wood to wood (i.e. beams to the tree), Garnier and his colleagues at the World Treehouse Conference (an event he used to host) developed a way to attach steel bolts and cuffs to the tree. Dubbed the Garnier Limb (or G.L.), this open source design can support 8,000 pounds.

Garnier sells GLs of all different types as well as plans to build your own treehouse. His DIY treehouses are for 12 foot trees ($150) and he sells about 30 or 40 plans per year. In this video, Garnier gives us a tour of his Out ‘n’ About Treesort, talks about the old “controversy” and its “public-tree” and shows us his workshop and his 1800-square-foot personal treehouse home.

Below are some pictures of Mike’s magical treehouse limb braces which allowed the trees to move in the wind without stressing and eventually tearing the house up or damaging the trees. Like so many things in like it was a ‘work in progress’ until tested and honed into the final design in the second photo.