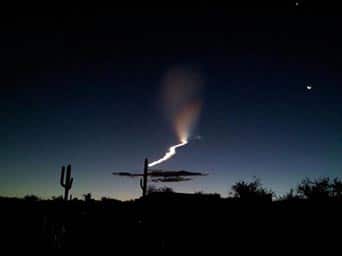 On Thursday morning, 13th September 2012, early risers from all over the southwestern United States – California, Nevada, Utah, Colorado and New Mexico – were stunned by the appearance of a vivid luminescent trail high up in the atmosphere. Photos taken by residents reminded me of the glowing trail seen across the Caucasus on the 7th June 2012 (which I have written about here). My suspicion that we were looking at the arrival and overhead explosion of yet another meteor or cometary fragment (MoCF) solidified when I read some of the ridiculous claims of the US Army that they had test-fired a rocket/missile at 5.30am local time on the 13th of September.

Folks contacted law enforcement in northern New Mexico and southern Colorado to report “a crash”. A sheriff’s deputy in northern New Mexico said he witnessed “an explosion” and part of the object breaking apart from the main body. No one reported a trail moving from the ground upwards, just a very fast-moving dot in the sky that produced a very bright trail mid-atmosphere, indicating that nothing was launched from the ground.

The “explosion” was a normal separation of the first and second stages of the unarmed Juno ballistic missile that was fired at 6:30 a.m. MT from Fort Wingate near Gallup, N.M., said Drew Hamilton, a spokesman for the U.S. Army’s White Sands Missile Range. The expended first stage landed in a designated area of U.S. Forest Service land.

The Juno I is a large rocket booster used for satellite launches in the 1950s, while the Juno II was a US space launch vehicle used during the late 1950s and early 1960s. Recently a  Juno rocket was used to launch Atlas V towards Jupiter in 2011. So the idea that the US Army launched one of these giants from Fort Wingate in New Mexico in order to “test” it – at the crack of dawn, no less, and over a densely populated area – is incredible, to say the least. Fort Wingate, incidentally, was shut down in 1993.

The Associated Press report got even weirder when it described not one but THREE missiles launched by the US Army:

The Juno missile was then targeted by advanced versions of the Patriot missile fired from White Sands, about 350 miles (560 kilometers) away, as part of a test. Two of the missiles were fired and hit the incoming Juno missile, said Dan O’Boyle, a spokesman for the Redstone Arsenal in Alabama, which was in charge of the Patriots used in the test.

Whatever about Patriot interceptor missiles “killing incoming targets by direct strike and not exploding”, they are again stretching the bounds of credulity with this story about the US Army lobbing missiles at an expensive space rocket in order to blow it to smithereens over US territory. Watch and listen as the Army spokeswoman lies through her teeth about how this incident was “one of our very high-end, very intense things that we do out here… not one of our everyday things“:

Now contrast the Associated Press account of what went down with the following report from a Utah-based media outlet:

It was the 14th missile launched from the Fort Wingate, NM area since the mid ’90s. Depending on the sunlight, it’s visible at times. The rising sun backlit the Juno missile’s contrail and provided a spectacular morning sight for early risers across the region.

The winds in the various layers of atmosphere skewed the missile contrail, creating a swirly cloud pattern seen in the sky. The missile then returned to base.

[…] all debris fell on Army property. It just put on a light show in the process.

Returned to base?? Not only does that contradict the story about two Patriot interceptor missiles hitting the Juno rocket, this scenario is physically impossible because rockets and missiles do not “return to base”! Somebody somewhere down the chain of command must have got their wires crossed. It seems that this addendum to the story was required to account for the reports of part of the fireball/MoCF crashing to earth. Either way, they are getting really desperate in their explanations of the celestial phenomena taking place in our skies.

If missiles were launched in the vicinity of this celestial visitor, then I wonder if they were tracking this MoCF as it approached the planet before firing a missile or two in order to plausibly claim that what folks witnessed was “just a missile test”?

A friend who witnessed the event sent me the following report and photo: Despite the feeble cover-up, most people have once again accepted the missile nonsense. But for how much longer will it hold out? In the past week alone, we had two Near Earth Objects zoom past us, ground fires in British Columbia started by an apparent overhead explosion that rained down fiery meteorites and Jupiter was impacted by a large body for the third time in four years. In addition to all the other ground fires started by fireballs/MoCFs in recent months, things are really heating up.

Keep your eyes on the skies…

Readers might also be interested in this: Reading Celestial Intentions Through the Wrong End of the Telescope: Missiles, UFOs and the Cold War