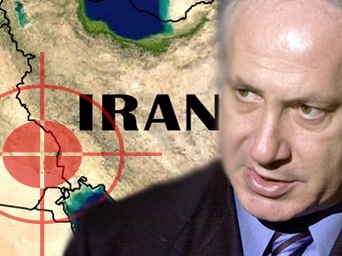 Netanyahu’s first reaction to 9/11: “Good for Israel!” But maybe not in the long term.

Almost every politically-aware person on the planet is puzzled by Israeli Prime Minister Netanyahu’s bizarre obsession with Iran. Netanyahu is risking his political career, his reputation, and Israel’s future by intervening in the US presidential elections. He is using all of Zionism’s considerable might – including organized crime assets like “Las Vegas Godfather” Sheldon Adelson – to force Obama to attack Iran; or, failing that, to make sure that Obama is defeated by the Zionist puppet Romney. There are even rumors of Israeli-sponsored assassination attempts on Obama.

It’s difficult to recall a time when an Israeli prime minister has inserted himself into a presidential election campaign in the way that Benjamin Netanyahu has. It’s even harder to recall a time when a trusted ally openly urged the American president to undertake a questionable, unpopular and highly risky war. We sure hope Netanyahu knows what he’s doing, because the stakes for him — and for the two nations he professes to care about the most — could not be higher.

The Jewish Daily Forward has good reasons to wonder whether Netanyahu knows what he’s doing. The editorialist cites polls showing that the American people strongly oppose attacking Iran, even if war breaks out between Iran and Israel and only US intervention could save Israel! These polls show that American voters no longer give a damn whether Israel, which has chosen to live by the sword, finally dies by the sword. As Dave Lindorff observes, Netanyahu’s mad obsession with pushing the US into yet another unwanted war for Israel “may have fundamentally undermined the long-standing ‘special relationship’ between the US and Israel.

And still Netanyahu continues on this seemingly suicidal course. He even orders the Mossad and its CIA assets including Gladio veteran Terry Jones to unleash a rabidly anti-Islam film, spammed into the faces of every Muslim on the planet via millions of dollars of computer server time and intelligence agency expertise – an obvious attempt to fan the flames of islamophobia and pave the way to a US war on Iran for Israel. Obama, who is on record saying he hates Netanyahu and that Netanyahu is a liar, and who knows that Netanyahu manufactured the “Innocence of Muslims” crisis to try to get Romney elected, responded by refusing to meet with Netanyahu in New York, and going on the David Letterman Show instead. A more blatant snub could hardly be imagined.

Of course he doesn’t really believe such nonsense. Even hard-line Israeli strategists admit that Iran appears to be only developing nuclear expertise, not actual weapons, and that in their worst-case scenario, Israel could live with a nuclear-armed Iran. After all, Iran has not attacked another nation in centuries.

Since the “nuclear crisis” is a hoax (like alleged Iraqi WMD in 2003) then what is the real reason for Netanyahu’s Iran obsession? Is it the Iranian government’s support for anti-Zionist resistance groups like Hamas and Hezbollah, and its calls for an end to Zionism through free and fair elections?

Perhaps. Iran’s open commitment to principled anti-Zionism represents the nearly unanimous position of the people of the Middle East, who have never accepted the genocidal Zionist entity as a legitimate state. Israel has been able to bully every other government in the region into shameful silence. The Islamic Republic of Iran will not be silenced. Leveling Iran with bombs would send a message to future Middle Eastern governments: Do not give a voice to your people’s resistance to Zionism, or else!

But while starting a war might punish Iran for its anti-Zionism, such a war would carry terrible risks for Israel. Even if all went well for Israel on the battlefield, the suffering of the people of Iran would probably shame the world into turning against Zionism even more sharply than the world turned against apartheid in the 1980s.

And there is no guarantee that things would go well for Israel on the battlefield. Iran has the capability to riddle Israel with rocket attacks, or even to take out Israel’s Dimona nuclear facility and perhaps render Israel and much of the surrounding region permanently uninhabitable. And Israel does not have the capability to seriously damage Iran’s nuclear program without US help. If the US intervened on the side of Israel, Iran could shut the Straits of Hormuz, and possibly sink many if not all of the ships there with Sunburn missiles, driving gasoline prices over $10 a gallon and paralyzing the world economy. Additionally, Iran has the capability to massively attack the US bases that surround it, killing thousands if not tens of thousands of US soldiers. A US president, especially one who dislikes Netanyahu and puts America’s interests ahead of Israel’s, would be very unlikely to help Netanyahu attack Iran.

Given that a war on Iran is a lose-lose proposition for Israel, why is Netanyahu fanatically fanning the flames of war, to the extent that even his American Zionist cheering section is baffled and embarrassed by his behavior?

Some question Netanyahu’s intelligence, arguing that he is just a furniture salesman who has been promoted far beyond his level of incompetence. While there may be some truth to this – I certainly wouldn’t want to overestimate Netanyahu’s intelligence – I don’t think he’s quite that stupid. I think Netanyahu has a very good reason to prefer war with Iran, despite all its risks, to peace. I think he does know what he’s doing.

Netanyahu needs the 9/11-triggered 100-years-war on Islam to continue for the very good reason that if it does not, the State of Emergency still in place in the US will be lifted, and Americans, unencumbered by the National Security restrictions of wartime, will quickly learn what really happened on September 11th, 2001. That possibility poses a very real existential threat to Israel – and to Netanyahu.

As Alan Sabrosky, former Director of Strategic Studies at the US Army War College, told Press TV: “I have had long conversations over the past two weeks with contacts at the Army War College, at the Marine Corps Headquarters, and I have made it absolutely clear in both cases that it is 100 percent certain that 9/11 was a Mossad operation. Period. If Americans ever know that Israel did this, they are going to scrub them off the earth.” And even if Israel were “scrubbed off the earth” peacefully through a one-state solution, Netanyahu would certainly hang for his role in the 9/11 attacks.

Unfortunately for Netanyahu and Zionism, Dr. Sabrosky isn’t the only US National Security insider leaking the truth about 9/11. Hundreds of military and intelligence people have come forward (see: http://patriotsquestion911.com/ ).The two biggest recent leaks are revelations by CIA asset Susan Lindauer that the CIA had detailed foreknowledge of 9/11 and attributed the controlled demolitions of the three NYC skyscrapers to “those goddamned Israelis”; and the assertion by Gwenyth Todd, who worked beside Richard Clarke on the National Security Council, that Clarke (who was publicly fired from an earlier job for being an Israeli spy) is the top suspect as hands-on controller of 9/11 from the US end. Yes, you heard that right: Richard Clarke’s colleague on the National Security Counsel, Gwenyth Todd, suspects Clarke of masterminding and running the 9/11 attacks. If Todd and other high-level sources are right about this, Clarke’s book’s title Your Government Failed You is an understatement.

Some of the same high-level sources who finger Richard Clarke as the US boss of the Israeli-instigated 9/11 false-flag operation also claim that President Obama, Joint Chiefs of Staff Chairman Gen. Dempsey, and other powerful Americans are considering exposing the truth about 9/11 during a second Obama term. In other words, Obama’s re-election could put Israel out of business, and get Netanyahu hanged from the nearest lamp-post.

No wonder Netanyahu is “overplaying his hand” by doing everything he can to get rid of Obama. And no wonder Netanyahu is desperately trying to throw gasoline on the “clash of civilizations” fire and trigger war with Iran. A huge Middle East war, no matter how destructive, would maintain the wartime State of Emergency in the US and impede the inexorable revelation of America’s biggest state secret: That American traitors, including Dick Cheney, Donald Rumsfeld, George W. Bush, Richard Myers, and others, helped Israel blow up the World Trade Center, bomb the Pentagon, and kill 3000 Americans on 9/11.