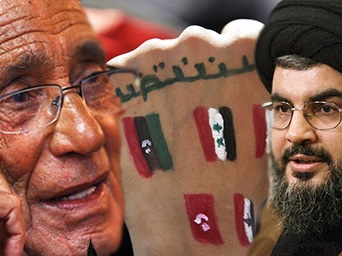 I think if the likes of Mohamed Hassanaein Haikal had the courage to speak up then as they speak now, perhaps there will be no need for an Arab Spring or a New Skyes Picot.

Mr. Haikal no doubt an intelligent man and a committed Arab Nationalist failed to do the right thing and failed to speak up when he was within the “inner circles” of the late Gamal Abdul-Nasser. The man who lead the military coup in Egypt that toppled the monarchy and who failed miserably to set the stage for the “democratization” of the Arab World.

An Arab World with free elections, political parties free and independent of military regimes, accountability, transparency, economic and educational systems that failed at every turn and of course a state and people free of the dreadful “Mokhabarat” that controlled the lives of people and kept the regimes in place. But for Nasser’s failures Mubarak will be unheard of and could never qualify to be president of Egypt, nor will Bashar or Hafiz, Saddam, or Ali Saleh or Bin Ali or Qaddafi will be heard of.

The late Nasser and his inner circles set the stage for incompetent, failed Arab regimes in Yemen, in Sudan, in Syria, in Iraq, in Libya certainly in Algeria with a military that failed at winning wars (except Algeria war of independence) and setting the stage for a bloody “Arab Spring” in Libya, in Syria and of course the millions of causalities in Iraq, not to mention the failed leadership of Arafat. One can understand the frustrations of Mr. Haikal and many so called “Arab Intellectuals and nationalist” because they were and are “irrelevant” to the Arab Spring and the emerging freedoms taking place now.

These days, the “Arab Spring” is coming under assault from all sides from “Arab Nationalists” who see in it as an “American-Zionist” conspiracy and a new way for the West to divide once again the Arab World as Mr. Haikal claims to “Islamist Fundamentalists” who are hijacking the Arab Spring.

Haikal: “What happening now is not a ‘spring’ but a new ‘Sykes Picot’ to divide the Arabs”.

Nasrallah: “What Yemen, Syria and the region are witnessing is part of a Zionist-American plan of fragmentation”

More surprisingly, the Syrian Arab Spring is coming under attack and assault by the likes of Sheik Hassan Nasrallah who sees the people uprising against a criminal regime in Syria as a “conspiracy” against the “Syrian State” and the Assad regime and its claimed role of “steadfastness and resistance” of course not against Israel but against democracy and reforms in Syria.

Both Mr. Haikal and Sheik Nasrallah failed to give credit to the hundreds of thousands if not millions who took to the streets in Yemen, in Egypt, in Libya, in Syrian, in Tunisia and in Syria, demanding freedom, liberty and accountability from corrupt dictatorial regimes that oppressed the people and ruined the nations economies while looting the country through nepotism, corruption, mismanagement using the “police state” as an instrument of perpetuating their rules.

Arab intellectuals and nationalists give more credit to an insignificant almost a non-entity like Bernard Henry Levy while discounting the roles of the thousands who gave up their lives so that dictators like Qaddafi, Ben Ali, Ali Saleh and Mubarak are out of power. The statements of Haikal and Nasrallah are an insult added to injury.

Of course on the other hand the Arab Spring was not the making of the “Salafis” nor of the Muslim Brotherhood, but the making of the people with active support and leadership of a non-political media savvy young people who with their commitments, courage breaking the wall of fears and strong commitments to the democratic process and democracy made all that happens. The “Salafis” and the Brothers simply road the wave and collected the fruits and rewards while those young paid dearly with their lives and because they are not well organized and well funded are now marginalized.

But for the fact that criminal ruthless leaders like Qaddafi and now Assad failed to see and recognize the people’s demand for freedom and liberty after years of oppression decided to use the military to wage war against the people and the nation we will not see the kind of menacing militias that are the main threat posing clear and present danger to the Arab Spring specially in Libya.

No one can deny the role played by these militias as those within Libya and now Syria and the brave fight they put up against criminal regimes and army, and the sacrifice they paid with their lives. However all that does not and should not justify the way they are holding the nation and people hostage as is the case in Libya and we hope it will not be the case in Syria.

If the Arab Spring is to succeed in countries such as Libya, Yemen, Syria, Tunisia and Egypt then these “Islamist fundamentalists” must give up their weapons and arms as is the case in Libya and allow the people to exercise their hard won rights to freedoms, to free speech, to free associations without having these militias and “Salafis” enforcing their will and vision of an “Islamic State” through the power of the gun and through black mail and intimidation of citizenry in the streets, in the media, and their dismissal if not abrogation’s of hard won rights for women in countries such as Tunisia.

What the Arab Spring needs most to succeed is an open democratic process that does not exclude any one based on race, ethnic origin and faith. In order for the Arab Spring to succeed it needs strong enlightened and intellectual leadership that can shape the vision for the future, establish a modern nation state where the people are the source and only source of power and constitutional powers, not the Mullah or the Militias as a substitute for the “army” or of the “mokhabartat”.
Keeping in mind democracy is a work in progress and could not be achieved over night even among the most enlightened people and nations.

The French Revolution continued for over 3 years, with more than 40,000 casualties and with “liberal assemblies” competing and fighting with “right wing” monarchists. So please give the Arab Spring a chance to find its way forward and mature.