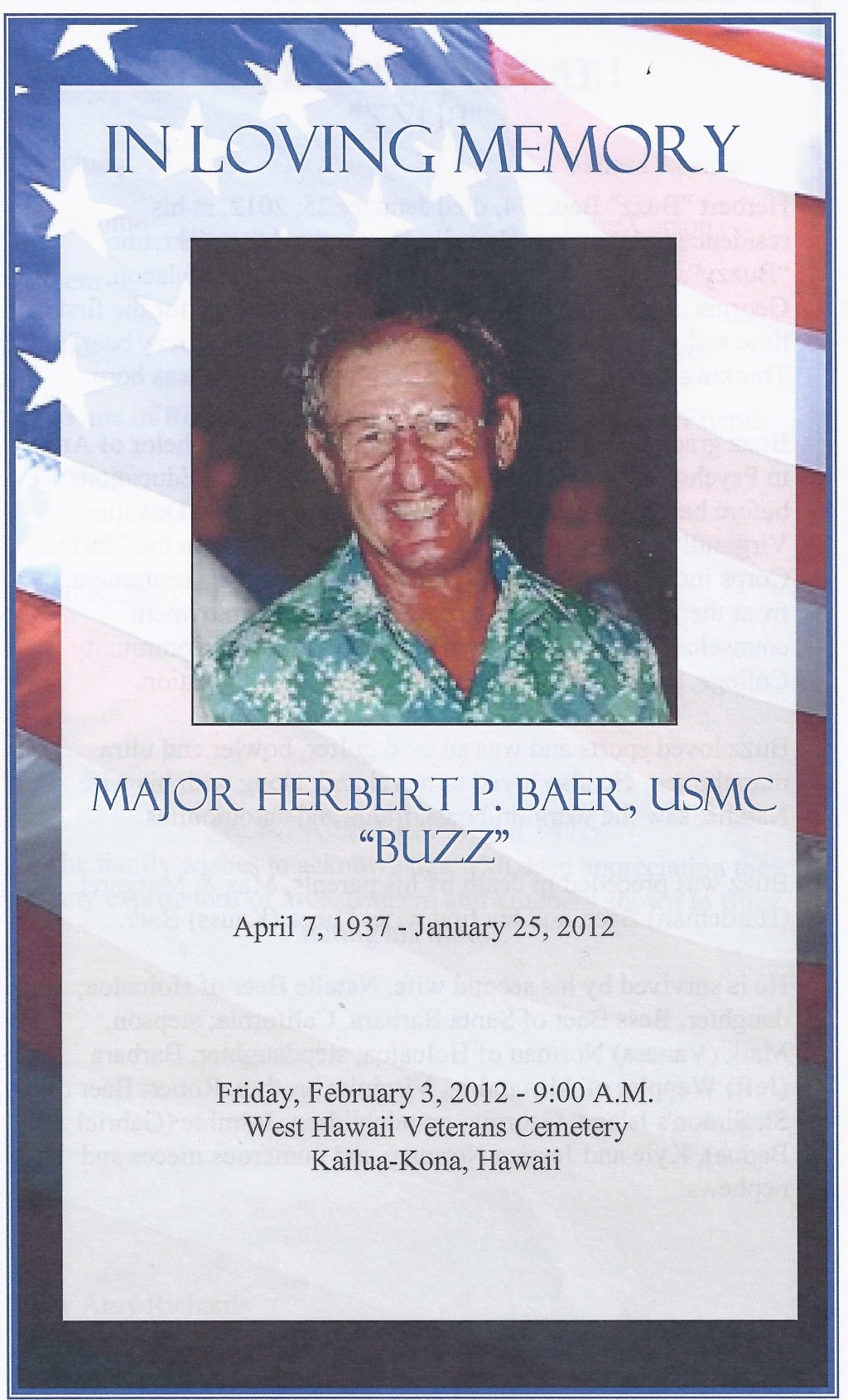 Marine dying of pulmonary lung fibrosis reaches out to help other veterans.

(HOLUALOA, HI) – There are no causality records of the dead and injured at Camp Lejeune.  The Navy and Marine Corps strongly disagree that there’s any scientific evidence to support that the organic solvents and benzene in Lejeune’s wells caused injuries and deaths.

With 130 military installations on the EPA Superfund list, many of them contaminated with Trichloroethylene (TCE), it’s easy to see why the Department of Defense would hesitate in admitting that exposure to TCE caused injuries and deaths.  Veterans can’t sue the government for injuries on active duty, but their dependents can file tort claims. 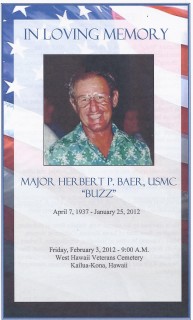 Like the 58,000 veterans on the Vietnam War Memorial, the Lejeune dead are often only known to family members and those who served with them.

One of those Camp Lejeune dead is Major Herbert “Buzz” Baer who served in Vietnam and died on January 25, 2012 of pulmonary lung fibrosis, a disease the VA agreed was caused by the contaminated well water at Lejeune.  Before his death, the VA awarded Major Baer a 100% disability for this deadly disease.

Like the many of the names on the Vietnam War Memorial, the Lejeune dead are often only known to family members and those who served with them.  If there is ever a memorial erected to the Camp Lejeune dead, Major Herbert “Buzz” Baer, USMC, should be near the top.  Born April 7, 1937 in Macon, Georgia, Buzz was commissioned as a 2nd Lieutenant in the Marines after graduating from Baylor University with a Bachelor of Arts in Psychology and a Master of Science in Physical Education.

Buzz was stationed at Camp Lejeune from 1968 to 1972.  During this period, he was attached as a Communication Officer with Headquarters Company, 6th Marines.  At the time, no one knew the wells on the base were contaminated with organic solvents (1957-1987). It wasn’t until the early 1980s that the Marine Corps started to close down contaminated wells at Lejeune.  For many who were exposed to the contaminated water, it was too late.

Buzz experienced the tragic effects of exposure to TCE, other organic solvents and benzene to his family.  After leaving Lejeune, Lucea (Kauss) Baer, his first wife, died of breast cancer in the 1970s.

I never met Buzz in person or spoke to him on the telephone; I only knew him through his emails.  Funny thing is that we both served in the Corps at the same time. After Camp Lejeune, Buzz was stationed at MCAS Cherry Point, NC, while my first permanent duty station was MCAS El Toro on the West coast.  Our paths never crossed in the Corps, but Major Baer left a lasting impression on me and Tim King, editor of Salem-News.com.

What impressed us both was his energy and devotion to researching the contaminants at both Camp Lejeune and MCAS El Toro, CA.  Buzz never served at El Toro but he offered to help us ‘peel the onion’ on El Toro’s contamination history, especially if it would served to help other Marine veterans.  This was just part of his effort to help other Marine veterans who were sick from toxic exposures and needed help to get through the VA disability and compensation process.

There is a great deal of documentation on the contamination of Camp Lejeune’s wells but in comparison, significant and unexplained gaps in government records at El Toro.  Both are EPA Superfund sites.  Camp Lejeune is still an active Marine base while El Toro closed in July 1999 with most of the base sold at a public auction to a real estate joint venture in 2005.  The Trichloroethylene (TCE) plume at El Toro is huge, spreading miles off the base into the Orange County aquifer.  There is no comparable risk of contamination to the off base aquifer at Camp Lejeune. At El Toro, TCE was used as a degreaser for aircraft parts and that may explain the huge quantity of TCE found in the soil, groundwater and aquifer at El Toro.  At one point, a kind of dry cleaning operation for aircraft parts was operated in Hangar 296 at El Toro.  Parts were dropped into a basket and lifted by crane into a heated vat of TCE.  There were no environmental constraints on the use of TCE for decades.  Over time, a huge plume of TCE spread into Orange County.

Tim King and I wrote about the contamination at El Toro and Lejeune in BETRAYAL:  Toxic Exposure of U.S. Marines, Murder and Government Cover-up.  Buzz didn’t live long enough to read the book.

Salem-News.com (Salem, OR) receives many emails from veterans of Lejeune and El Toro.  After awhile, you can pick-up indications of serious health problems from the senders, even if not spelled out in the emails. Buzz never once mentioned his precariously medical condition. When someone is critical ill, the last thing on their mind is to do a spelling check on their PC or review the email for obvious errors before sending it.  Neither Tim nor I knew that Buzz was critically ill with pulmonary lung fibrosis. The prognosis of this disease is dismal. Pulmonary fibrosis means scarring throughout the lungs. The majority of patients with this disease are dead within 5 years.  It was only after Natalie, his spouse, notified us of Buzz’s death that we learned that while on oxygen in a hospital bed, Buzz continued to reach out to other veterans via emails and telephone , offering to help all with their VA disability and compensation claims.

Natalie told us that, “It wasn’t Agent Orange the killed him [from his service in Vietnam]. He was declared 100% disabled by the VA from pulmonary lung fibrosis with severe restriction, requiring oxygen therapy as a result of contaminated water exposure [at Camp Lejeune].  I don’t know when he first discovered the contaminated water issue, sometime between November 2010 when he was first diagnosed with the fibrosis and February 23, 2011 when he filed for disability…the correspondence he had with you and Tim and the others kept him alive and vital throughout the seven months he was bedbound. He’d be at his laptop for hours and I thank you all.” 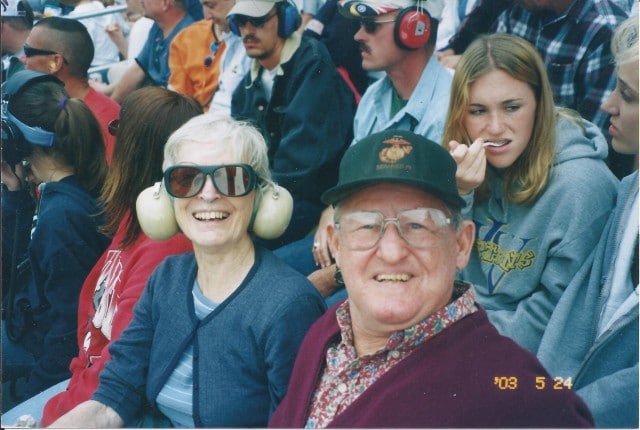 Natalie shared with us what it was like to live with Buzz in the short time he had to live:

“It started with a cough – a hack, hack, gr, and ahumph – the usual growl that comes with an occasional cough. No, he didn’t need to see doctor; it was probably from the vog (a volcanic haze we often have here on the big island of Hawaii.) It comes from Mauna Loa, the mountain that lies in our backyard. Besides, what could seriously be wrong with him?  He had never smoked, had run numerous marathons on several islands of the Hawaiian chain as well as the 65 mile run called “London to Brighton”.  Stop your worry – I know my body.

By October [2011], he gave into the pleas of his family and body. “See    – it’s nothing,” he said, when the results came back “allergy” and we began our first round of the nine medical facilities we would visit in the next seven months. An x-ray showed his lungs were scarred. That there was no cure for that didn’t trouble either of us – remember he had never smoked and run all those marathons.

We began to listen seriously when he discovered by chance that there was an episode of contaminated wells at one of the bases where he had been stationed and where his first wife contracted cancer. Even then, the words “poisoned wells” did not shatter our calm nor foretell of his death in another nine months…by June he was in the hospital with pneumonia and soon we were on our way   to oxygen 24 hours a day.

His final six months were ones of learning how to live with tanks of oxygen, a hospital bed in the middle of the living room (centered in the room so he could watch TV and use his laptop.)  We had excellent care from West Hawaii Home Health, the VA and in the final four months from the Hospice of Kona.  They provided us with several aides, nurses and when needed, a doctor.  He found comrades on the internet to discover more about the contaminated   wells and what the veterans could do about it, struggled with applications to the VA for compensation. We laughed a lot, at the absurdity of this healthy man who did the right things for his health but owned by this strange malady…occasion.”  Autumn came and with it more struggle for him to breathe.

Meanwhile he supported other veterans via e-mail in applying for disability from the VA and was thrilled when his 100% disability award came to him in November. We laughed, too.  Imagine being pleased with that label.

And then, on a special day off for me when I was at a drawing class, I fell and was taken to the hospital with a concussion. Hospice Arranged for extra care for Buzz while I healed in my two days there.  Home again and sitting two days later with Buzz along with my son and his daughter here for a visit, we noticed he was quiet and then the words from my son, ‘He’s not breathing’  He just slipped away, at peace.”