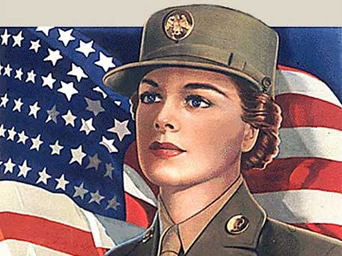 WASHINGTON, Oct. 22, 2012 – Hundreds of active-duty women and veterans turned out Oct. 20 at the gateway to Arlington National Cemetery to celebrate the legacy of more than 2.5 million women who have served in the nation’s military.

Former WACs, WAVEs, WMs, WAFs and SPARS shared with their active-duty counterparts in the contributions women have made to the U.S. military that are enshrined at the Women in Military Service for America Memorial, dedicated by President Bill Clinton on Oct. 18, 1997.

While WIMSA serves as a memorial to all of America’s service women, Wilma L. Vaught, president of the Women’s Memorial Foundation, said she doesn’t consider it a museum, though the building does contain a gift store and features numerous artifacts and photographic exhibits.

“This is more than a memorial; it’s an educational center meant to tell the story of women in the military from the American Revolution through Iraq — it was an opportunity to tell the story of women’s service individually and collectively,” said Vaught, who enlisted in the Air Force in 1957 and went on to retire as a brigadier general in 1985 as one of only seven women serving as general or flag officers in all of the services at the time.

Vaught said WIMSA was also created because many women going back to World War II felt they never received recognition for all they did — from the nurse corps of the Army and Navy to the Army Air Corps WASPs who delivered fighter and bomber aircraft across the country. WIMSA also honors all women who served overseas during conflicts such as those who served with the Red Cross, USO and Special Services.

“They deserved recognition, because they changed the military and they changed life in America for women [and] because they stepped out and did things women hadn’t done before. … They created a new day for women,” she said. “Many of today’s military women go through the memorial and realize for the first time what women in the military did before them.

“We stand on the shoulders of all these women who met up with all kinds of obstacles and barricades and they overcame them,” Vaught added. “Today, they can say, ‘I can have a career, I can have the opportunities for education, I can have a family and be in the military, when they couldn’t stay in the military if they were pregnant.”

The afternoon ceremony included memories from active duty or retired speakers from each service branch who told the stories of why they served and the challenges they faced at the point in history in which they joined.

Speakers included Allison A. Hickey, undersecretary of veterans affairs for benefits and a retired brigadier general, whose military career started when she graduated from the Air Force Academy in 1980 — the first class to include women. Too many women veterans just fade away, she said, not thinking too much about their service after they leave the military.

She encouraged women veterans to stand proudly and declare themselves veterans, and did so herself. No fewer than 10 other women stood and joined in the declaration.

Keynote speaker Jessica L. Wright, assistant secretary of defense for reserve affairs, was the Army National Guard’s first woman CH-47 Chinook aviator. She began her association with the Army by enlisting in 1975, obtained her bachelor’s degree and retired as a major general in 2010 after commanding the Pennsylvania National Guard.

“There’s not a better or [more] fitting place to pause and reflect on those contributions than here at the Women’s Memorial.” She said. “It is a wonderful testament of the power of women in the service to our country. This monument honors the legacy and the proud and distinguished service of women. With every passing day, there is a new and enthusiastic group of young women who join the list of forbearers that we honor here today. They have the same determination and courage that runs through our current serving women that was in our predecessors.”

WIMSA Foundation officials hope to have 250,000 women veterans in the memorial’s historical record by the end of the year. Vaught said they’re just 301 shy that figure, and that she’s confident the foundation will reach its goal.

What she’s less sure about, she said, is raising the $3 million needed annually to meet payroll and maintenance of the 33,000 square-foot education center. She said the memorial has an average of about 150,000 visitors a year. “Not too bad a number,” she added, “but I had hoped that given there’s about 4.5 million who visit Arlington every year, we would see about 500,000 visitors. I think that would solve our economic problems.”