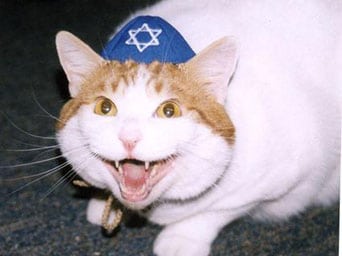 Just as we were learning about ‘anti’ Zionist  Mondoweiss’ decision to revise its comment policy to exclude discussion of  the true nature of the Jewish State, the openly pro Zionist Haaretz paper published a news item about the Israeli poet, singer songwriter Zeev Tene.

Tene’s new song is called ‘Jew-Ish’ and as you may guess, is actually very critical of the Jew, Jewishness, The Jewish State and Jewish Identity in general. On the pages of Haaretz, an Israeli paper, Tene tells the truth that Mondoweiss and other AZZ (Anti Zionists Zionists) are determined to suppress.

Is it a coincidence that our leading ‘pro’-Palestinian Jews are so determined to stifle any critical discourse to do with the Jewish State and Jewish identity? Not at all. Philip Weiss, the founder of the ‘progressive’ Jewish website admitted to me in an interview that Jewish-self interests are at the centre of his activism. “I believe all people act out of self-interest. And Jews who define themselves at some level as Jews — like myself for instance — are concerned with a Jewish self-interest. Which in my case is: an end to Zionism,” said Weiss.

Unlike Philip Weiss, Zeev Tene, is a proud self-hater. He calls a spade a spade, he says what he means and he means what he says.

How do you live with it

How do you remain indifferent

You lock an entire nation behind a fence

Just because it wants from you to be free

You stand and sing about being free

Yet, you forgets what humanity is

You forget that only yesterday you were the Other

Jew ish! How do you live with it

How do you remain indifferent

You who were pushed down

The scent of your burnt flesh is still in the air

You’ve seen how in split second

A man can become a beast

It’s only yourself whom you lock behind the fence

It’s only yourself whom you lock behind a fence

The Wandering Who? A Study Of Jewish Identity Politics, Jewish political interest and Jewish hegemony within the Palestinian Solidarity Movement and the left in general..