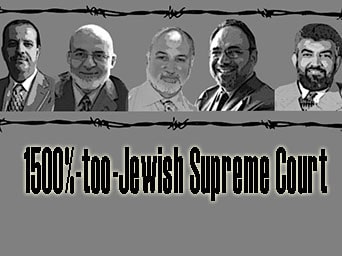 They still call it the US Supreme Court.

But like Congress, the White House, the media, organized crime, and big banking, the Supreme Court is just another Israeli-occupied Bantustan.

Absolute Jewish-Zionist domination of American political life was confirmed last Friday, when the Supreme Court quashed the appeal of the Holy Land Five. The Five now face life imprisonment for trying to feed children starved by the Israeli genocide of Palestine.

None of the imprisoned humanitarian heroes was ever charged with complicity in any act of violence. Their crime was feeding starving children, no more and no less.

The prosecutors, to prove that “Hamas-linked charities” in Gaza were involved in feeding the children, brought in “anonymous Israeli intelligence sources” to “testify.” Since when was anonymous testimony allowed in US courtrooms?! Much less by agents of a hostile foreign power that has repeatedly attacked the United States – a foreign power whose intelligence service lives and dies by the motto, “By way of deception thou shalt do war.”

A more blatant act of complete subservience to Israel, a more direct statement that the American government no longer exists, could hardly be imagined.

And now the 33% Jewish Supreme Court – that’s a whopping 1,500% over-representation in proportion to the US population – has confirmed that Israel owns the US.

Israel is sending Americans a message: “Don’t [email protected]!* with our genocide!”

I used to think people who are stockpiling weapons for the coming uprising against ZOG, the Zionist Occupation Government, were a tad extreme.