Home Veterans Mahmoud Abbas and the Right of Return 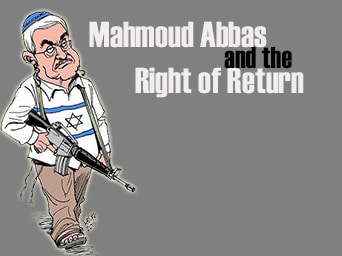 The Palestine Liberation Organization (PLO) and its leadership never had any legitimacy deriving from Palestinians under Occupation or in the Diaspora. The PLO and its leadership past and present incompetent to liberate, unfit to lead, failed to build and organize a modern nation state, always self serving, a political, financial mafia if not a criminal racketeering organization, a perpetual fraud and lie must disband now.

Mahmud Abbas, the head of the Palestine “liberation” Organization, head of Fatah and the president of the Palestinian Authority chose the 95th anniversary of the Balfour Declaration to renounce on Israeli public television the “Right of Return” of the more than 6 millions Palestinians living in exile.

Perhaps Mahmoud Abbas is desperate to save the political, financial if not criminal mafia that runs and operate the Jewish Occupation from Ramallah. Hostage to salaries of an army of functionaries and civil servants managing the Jewish Occupation not to mention providing security to the Israeli army and armed Jewish settlers to the tune of $1.4 Billions annually in expenses for the Palestinian Security Forces.

By renouncing the “Right of Return” for the Palestinians Mahmoud Abbas gave full recognitions to the Right of Return for all “Jews” kosher and non-kosher, authentic and suspect Jews. Confirming the fraud and lies perpetuated by the PLO and its leadership and the Zionist movement.

For over 45 years the PLO and Fatah leadership past (Arafat) and present (Abbas) have made the Right of Return a fundamental and basic issue in any peace settlement with Israel. Well it seems that Mahmoud Abbas decided to expose the fraud and lies of the PLO and renounce any rights to represent Palestinians of the Diaspora.

If one is to look at the history of the PLO and the leadership of Arafat, Abbas, Qurai one will see nothing but fraud, lies, and looting, with mafia like behavior of many of the leadership within the PLO and Fatah. What we see now in Ramallah from abuse of power, nepotism, lootings, civil and human rights abuses has been going on since the group first established military presence in Jordan and subsequent move to Lebanon where it ran the “Fakahani Republic”. Oslo is nothing but an ingathering and collections of thugs, incompetent and failed cadre that return with Arafat to run the Jewish Occupation and loot the treasury.

Desperate to save his narcissist leadership, that of the PLO and Fatah, the late Yasser Arafat decided to enter into secretes negotiations with Israel undermining the post Madrid public negotiations lead by the late Dr. Haider Abdul-Shafi. Arafat and key members of the PLO/Fatah were afraid that Dr. Abdul-Shafi might emerge as the Palestinian leader that can potentially challenge Arafat leadership.

Having lost much of his credibility after siding with Saddam, having presided over the looting of tens of billions of people’s money, and having caused irreparable harm to hundreds of thousands of Palestinians in the Gulf and around the world, Arafat turn to Israel to recover all that he lost and he was able to do that when he negotiated and signed the Oslo Accord. Arafat and the PLO turn to Israel to regain legitimacy lost among all Palestinians.

Oslo was nothing more than legitimizing the continued Jewish Occupation by giving full and unconditional recognition to Israel an Israel without defined borders. In exchange Israel gave full recognition to the PLO as representative of the Palestinian people thus Arafat was able to secure a perpetual role for the PLO and its leadership and as long as there is an Israeli Occupation. Arafat and the Oslo team left out all key issues to an Israeli veto including Right of Return, Jerusalem, compensation and ending the Jewish Occupation. Under Oslo the Palestinian leadership gave Israel the right to “veto” any and all issues put forward. The Palestinian territories occupied in 67 were referred to as “disputed” not “occupied” territories subject to international law, thus the attempt to go to the UN.

As a consequence of these fatal if not criminal failures, Israel was able to build and expand Jewish Settlements on 58% of the “territories”, was able to build and continue to build the Apartheid Wall, continued to rob and steal water from aquifers located in the “territories”, continued to maintain and expand more than 550 “security” checkpoints that subjects millions of Palestinians to daily humiliations. In exchange for all this give away, Arafat and the Oslo team were granted a Palestinian Authority to manage and pay for the Jewish Occupation through money begged from donors and few thousand VIP passes.

The PLO and its leadership failed the Palestinians at every turn and at every level and everywhere from Kuwait and the Gulf to Lebanon and Syria, to Jordan and Egypt. It looted tens of billions that remained unaccounted for. Oslo was nothing but deliberate collaborations with the Jewish Occupation. It rendered the Palestinians people powerless reducing those under Occupation beggars and thieves and undermined any chance for the Palestinians in the Diaspora to have a so say in any final settlement. Diaspora Palestinians have no choice but organize and have their own organization that derives its legitimacy from the people not from Israel as the case with Abbas and the PLO.