Home Veterans Veterans: We Honor Those Who Die, We Neglect Those Who Survive 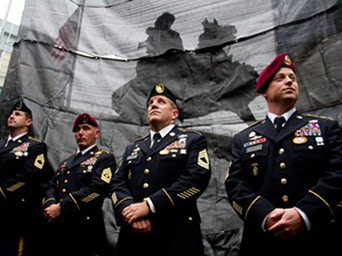 Too bad our government and nation honor those who die and neglect those who survive. We honor those who die in wars with 21-rifle salute perhaps a place in Arlington National Cemetery, if the remains are lucky one and escape the garbage dumps were the remains of many ended. We all remember the scandal and the terrible conditions at Walter Reed Hospital where many of the wounded ended in the criminal war waged by George Bush.

I was one of the lucky ones (thankful) who took full advantage of the GI Bill. I used it to attend Indiana University full time and of course the money was not enough to pay for all my expenses. So I had to go to work, in fact continued to work after I enrolled full time at the university.

As I said the money was hardly enough to pay for tuition, books, transportation, food and housing, that is why I continued to work and always looked for jobs that paid better.

I worked as an ambulance driver and assistant mortician (Burns Memorial Chapel) and worked as a hospital orderly (Mercy Hospital) and when the money was not enough went to work in the steel mills of Northern Indiana to be exact at Inland Steel in East Chicago, Indiana.

I worked in the Number Two Bloomer, this is the area where special steel is prepared. Huge “ingot” of red-hot steal are placed in special chambers with special tiling that resist hot temperatures.

I helped the mason by handing him the “bricks” as he plasters these bricks on floor and the walls. I worked straight midnight shift 5 days a week from mid-night to 8 am. By the time dinnertime came (around 4 am) my arms were almost “paralyzed “ from the number of bricks I handed over the mason. The money was good $2.81 an hour and was glad to have a job. I was able to save couple of thousands of dollars to help me transition to another job. This job perhaps was the most difficult. The summer was very hot and the winter was like Siberia as steal mill was right at the shores of Lake Michigan.

As the university courses became more difficult and as I advanced I had to look for a job that was not as demanding of my time and the schedule was flexible. I was hired by Indian University as a campus bus driver. Well the pay was not too bad, the people I worked with were great and very good people. The passengers depending on the route ranged from very nice (married housing and freshman) to obnoxious and arrogant (fraternity and sorority route–North Jordan).

This job and the money I saved together with my GI Bill helped me graduate (BA) from university in 3 years rather than 4 years. As a member of the IU Veterans Club I know of many who were in the same boat like me. They worked to augment the GI Bill and went to university. I believe all veterans should have free university education.

However there is the other side of the story. Hundreds of thousand of returning GI did not take advantage of the GI Bill. They came back really screwed up from the war in Vietnam and they did not find the mental help assistance badly needed, not to mention the almost criminal neglect they had to endure in VA run hospitals.

It is sad and tragic that our nation did not give much care and attention to the mental status of the many who came back really damaged by the wars. Damage that is perhaps equally permanent likes the loss of limps. Many of the returning GIs ended on skid row in Chicago, in Los Angeles, New York, Detroit and even many in small towns America.

Neither the administration this one or past ones or the Veteran Affairs took the mental illness suffered by returning GI’s as a serious illness equal to the physical injuries suffered and must be treated if returning GIs were to become productive.

To those who died in Iraq and Afghanistan, may you rest in peace, and those who are undergoing physical rehabilitation keep the faith in a nation that have lost it. Not so sure what we have achieved in these two wars, but lost of precious lives, and trillions in lost money. America’s wars are not for liberation but for the benefits of foreign nation and the military industrial complex. The War on Terror is a losing war, fraud equally if not more than our War on Drugs.