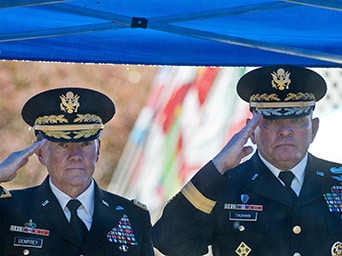 YONGSAN GARRISION, South Korea, Nov. 10, 2012 – Veterans of the Korean War would have recognized the weather if nothing else about the South Korean capital of Seoul. Pouring rain obscured the skyscrapers that are now a symbol of Seoul on Nov. 11 here, but the Veterans of Foreign War carried through with a ceremony to remember their comrades — especially the more than 38,000 Americans killed in the Korean War from 1950 to 1953.

Dempsey said it is right and fitting to honor veterans, because while he represents the men and women who make up the finest military the world has ever seen, “we know we stand on very broad shoulders.”

“On Veterans Day we honor every man or woman who has worn the uniform of our nation, who have selflessly secured America’s promise throughout our history,” the general said. “That history teaches us that security doesn’t just happen. It demands effort, sacrifice, courage and commitment. It requires generations of men and women willing to go to distant lands and, as the Korean War Memorial in Washington says, ‘to defend a country that they never knew and a people that they never met.’”

Dempsey asked the audience to remember not only the veterans of previous wars, but those thousands of service members in harm’s way today.

“This isn’t just about what we say here today; this is about how we honor our veterans every day of the year,” the chairman said. “It’s remaining committed to supporting them and their families in every way that we possibly can. It’s about serving them as well as they serve and continue to serve our nation.”

That, the chairman added, is the sacred trust between America and those who defend it. “It’s a trust extolled by the 8th Army – honored by this memorial – that drove the enemy north of the 38th parallel,” he said.

Kim thanked the Korean War veterans for giving Americans and Koreans “the freedom to chose their own paths.”

The ambassador noted that what began as a purely military alliance in 1950 has morphed to a full and close alliance on every level. Behind the bulwark of U.S. military, the South Korean military has grown to a world-class organization. South Korea has grown from a destitute land destroyed by war in 1953 to the 12th-largest economy in the world. Thanks to the security provided by the U.S.-South Korean alliance, he added, this country has risen from a Third World nation to the First World in a generation.

Kim said the South Korean military has stood with its American allies in Vietnam, Iraq and Afghanistan, and he thanked them for the Korean people for their sacrifices.

Thurman said the ceremony was a chance for both Americans and Koreans to reflect on “our values and our freedoms that we share.”

He noted that many U.S. veterans live in South Korea, and said it is fitting to recognize them.

“Today we honor the young men and women who throughout the history of our nation answered the call in times of need,” Thurman said. “Our veterans served both at home and overseas to defend our country and its values.”