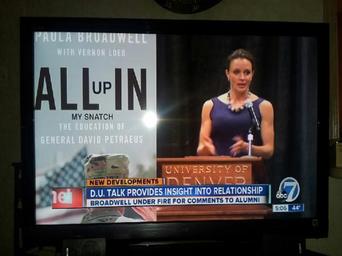 Just When You Think it Can’t Get Any Worse….

The FBI visited the West Point grad and fast track career girl on Veterans Day Monday evening.  Lt. Colonel Broadwell has not been referred to by her reserve Army rank for some reason. It is not an oversight. There has to be a reason.

But she got a little more attention than I am sure she wanted when they began exiting with evidence boxes, and even taking her expensive large Mac monitor.  Ouch!! It will be a Veterans Day she will not forget.

We knew when Gordon ran the first article on this scandal that it would unravel within a few days but we never expected  it to become Email-Gate, served with a twist of half naked FBI agent.

As we love to say around here, “You just can’t make this stuff up.”

One of the clues that intrigued me in the initial reporting, which was most brief,  was the very clear mention that Mrs. Paula Kranz Broadwell was ‘under investigation’. It begged the question as to why an investigation at this stage of the game that would require the CIA top pilot to eject from a perfectly operational plane, would leave the other party still under investigation.

There is something else strange that the corporate media has missed or dodged. If Lt. Col. Broadwell, and General Petraeus had a thing going on, the military would have had jurisdiction to take action. But they have not.

What would hold the FBI into a case like this is concern that one of the parties was linked to a foreign intelligence operation.

There has been no news that Petreaus is under investigation. That narrows that field down quite a bit, and hence you see the photo above of the reverse early Santa visit to Lt. Broadwell’s house.

We knew that interested parties would be leaking versions of the story that they wanted to get out early in case it became a free for all, where when it is over, all that a lot of folks remember is the beginning and the end.

Congressman David Reichert (R- Wash.) was quickly out of the gate over the weekend with his FBI agent source had been concerned that the investigation was being swept under the rug.

This is an understandable concern, something all FBI people live with, especially those who work counter espionage on the Israelis. The track record there of obstruction of justice, the political version, is a national disgrace.

I figured right away that with tight FBI controls on the case that this source could only have been an agent on the case, and his Reichert contact would lay railroad tracks right to his front door. And it did.

We learn today that the agent had been removed from the case partially due to sending emails with at least one semi nude photo to Mrs. Jill Kelley, who had brought the initial complaint to her ‘friend’ the FBI man. Yes, she ‘knew’ the FBI agent.

A ‘friend’ FBI agent should never have been point man on this case, which agent so-and-so, whose identity we will learn soon has provided us so well the reason why.

We also learn that Mrs. Kelley has a Lebanese background, and have confirmed that Kranz is a very common Jewish name, but of course not a peep about that from the corporate press.

Now you can accuse me of reaching all that you want to, but Kranz-Broadwell’s anonymous emails to Jill Kelly were the wild card in this story.

Broadwell may have a Jewish name and not be Jewish. But if she is and she thinks  the Lebanese lady moved in on her guy we would have a motive for her flipping out with the anonymous emails…an ethnic cat fight.

But we are not done yet. Petraeus’ replacement in the Afghanistan theater, General John Allen enters the theater, also a member of the ‘thousands of emails to a woman not your wife club’. The reports mentioned the 20,000 range today. I am being kind to the general by assuming that was a typo mistake.

Next we find both Generals Petraeus and Allen writing character reference supporting letters in a child custody battle for Mrs. Kelley’s sister, described by the judge as mentally embalanced. I found I was pinching myself to proove  I was not dreaming all of this.

And then there is another issue that Gordon and I were discussing today.

If ‘casual’ female acquaintances of three and four star generals with war time commands can have the time to write thousands or God forbid, tens of thousands of emails, who is minding the war. Where would the generals find the time?

But I have saved the best and the worst for last. Our hearts go out to the families, the spouses and especially the kids, but we have to cover the story. Parents warn and train their kids all the time about the consequences of bad decisions. But they always leave out the part that all bets are off once you get involved with Washington, DC.

It seems that some not too busy Denver TV station editors might have amused themselves by Photoshopping Paula Jones’ Petreaus book cover…and saved the file on the work computer. Mistake!! Here is how I think this goof up happened.

When asked to edit a background news story of Broadwell’s past visit to Denver, they pulled up a book cover photo up to use as a drop in image. Guess which one it was? Right. It was the one they had fooled around with.

So all you parents out there, be sure to save this story to show your teenage kids what the term ‘spiral out of control’ can mean.

This story is going to be a learning experience for a lot of people. For example, if General Petreaus and General Allen had time while on their War on Terror stations to send thousands of emails to someone they were flirting or actually having a fling with, do you think they are the only ones? And by that I mean the brass.

And if the military brass should be held to strict accountability for ‘conduct unbecoming of an officer’, is it really fair to punish them and give all the Congress Critters a free pass?

They also deal with classified information, some of them a great deal of it. And we all know that there are many outside entities trying to get into their britches, so to speak, as organizing such indiscretions is an age old Mata Hari tactic.

We have kicked off the discussion, because we are VeteransToday, and that’s what we do here…put stuff on the table that needs to be dealt with that often no one else will.

We know about gangrene. You can only ignore it until the smell gets so bad, and then you don’t smell anything because it has killed you. Let’s not wait that long.