Home Veterans A Radical Remedy for Veterans – Humanity and Truth 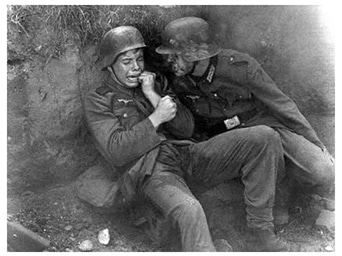 Nothing has changed for soldiers since World War II, only now we try to drug away the terror, or train it away with video games, propaganda and even more lies.

We are a nation that utilizes preemptive war to accomplish our financial and political objectives. This is fact. We are a nation run by people so bereft of conscience and normal human empathy that we most damage those willing to live and die in service of our current society, or more accurately, in service of what they think our current society is. I read this article on the drugging of soldiers recently and realized that the men they are writing about represent a few tiny drops in the ocean of suffering that we as a society have created through war and the aftermath, through inhuman designs and inhuman acts. This ocean of suffering is all but ignored by the people in positions of power who have the resources to address it, those who run the very government organizations that design the wars. Pathological individuals in positions of power send young men and women to war. Pathological individuals in positions of power abandon these same young men and women to the streets or psychotropic medication, or both, when they return.

From the referenced article:

The mental health watchdog Citizens Commission on Human Rights (CCHR) announces the second in a four-part series by award-winning investigative journalist Kelly Patricia O’Meara exploring the epidemic of suicides in the military and the correlation to dramatic increases in psychiatric drug prescriptions to treat the emotional scars of battle. The second installment covers psycho-pharma’s disastrous chemical experimentation within the military ending in sudden unexplained deaths, including those of Marine corporal Andrew White and Senior Airman Anthony Mena who were prescribed a total of 54 drugs between them, including Seroquel, Effexor, Paxil, Prozac, Remeron, Wellbutrin, Xanax, Zoloft, Ativan, Celexa, Cymbalta, Depakote, Haldol, Klonopin, Lexapro, Lithium, Lunesta, Compazine, Desyrel, Trileptal, and Valium.

Andrew White and Anthony Mena have become part of ever-increasing numbers of young, seemingly healthy soldiers who survived the horrors of war only to return home to fight, and lose, their toughest battle. Their deaths were not suicides. Rather, they are among a growing list of sudden deaths among military personnel, which many believe is due to sudden cardiac arrest brought on by the drug cocktails being prescribed. Fred Baughman Jr., MD has been researching these questionable deaths and believes the few that are known are just the “tip of the iceberg.”

By the time many of these soldiers return home, they realize, often only on a subconscious level, that they’ve spent years of their life in service of a lie so large that it can’t be spoken. Their minds can’t deal with the cognitive dissonance that results from having witnessed and taken part in the atrocities our nation is known for, while simultaneously buying into, or even passively accepting, the idea of being a ‘war hero’ or ‘veteran of freedom’. Their minds can’t deal with the idea that they are the only ones who see this horror, this contradiction, the utter insanity of it, while their families and communities welcome them home and expect them to get “back in the swing of things”. While there are individuals who can be successful in such an environment – those inherently lacking in conscience and normal human emotional capacity – the healthy human mind breaks under such pressure because it is not adaptive for human beings to go to war and kill other human beings for corporate goals and aims – even if those goals and aims are well hidden behind false flag terror events and shady bogey-men of doom. It breaks us – it breaks our minds, our bodies and our hearts.

So, we have hundreds of thousands of men and women suffering intensely and a power structure with no capability to, or intention of, helping them because it is not in that power structure’s inherent nature to do so. We cannot, as a society, expect organizations run by psychopathic individuals to care for the physically and psychologically devastated – yet we do, and we wonder and beat our chests and rail against a system that “does not work” for these people when it was never designed to work. Another article that caught my eye that is directly related stated:

From 2001 to 2009, the Army’s suicide rate increased more than 150 percent while orders for psychiatric drugs rose 76 percent over the same period.

Our soldiers are killing themselves because they see no other way to end their suffering – suffering built on and breeding on lies, official denial and the isolation that comes from never being able to speak about a lie so large that no one dare acknowledge it.

So, what is the solution? Is there a solution or have those who ended their lives found the only realistic one? Here’s a radical idea: tell them – all of them – the Truth. Tell them that they were lied to, that they fell for a marketing pitch, that the people they killed did nothing wrong, that they’re not having nightmares for no reason. Tell them that it’s a sign of their humanity that they can’t forget, that they can’t sleep, that they’re losing weight and getting sick. Tell them that we, as a nation, as their families and as their friends, deeply understand because we were lied to as well. Tell them that there is a way out of this lie and it has to happen one person at a time, starting with them. The reality is that a human being cannot recover from severe trauma (physical or psychological) without understanding what happened – without understanding the truth of the matter.

Tell them that we failed them and are still failing them miserably, but that there is another way and that way starts with the unabridged truth.

The truth will empower them because most of those demons that command their days and their nights were born from believing the lies they were told and then being infinitely, tortuously confused about why, if they are soldiers for freedom and democracy and on the “good side” of the fight, it feels like they lost their soul.

The truth will empower them because, without it, they can only look back through a haze at why they made the decision to join an organization they thought was Good and Mighty, only to find out through their own blood and screams that it is a criminal, twisted machine of death for no “good” reason.

The truth will empower them because in that truth they can begin to put back together their view of not only the world, but themselves. They can begin again to tell the “good” from the “bad” and be able to choose, this time with clear eyes, which side they want to take. Without the truth, there is no hope for them, with it, they have a chance.

The mental illness that is created by forcing non-psychopathic human beings to behave in a psychopathic manner, or be killed, which is the condition on today’s battlefield, cannot be truly cured with anything other than the truth.
Of course, this radical remedy is one that can only be administered by those of you reading this – by those of us who know these men and women and care enough to reach out with the truth and give them an opportunity to discuss the reality of it all without the whitewash of patriotism and democracy and the “good fight”. It has to come from individuals because the current power structure cannot, by definition, tell these men and women the truth about what has happened and why and how their part in it all was wholly stage-managed by pathological men and women in power. If the power structure could remedy this, it would be done – they can’t because it does not, and cannot ever, benefit them to do so.

Yes, it’s a harsh, scary, truth – but nowhere near as harsh and scary as the nightmare those with a conscience are trapped in due to the lies. The truth is an infinitely more effective remedy than psychotropic medication that leaves already ravaged bodies and minds in a hopeless, mindless, zombified state one step from death – one final step that many take themselves. We, as a society and as individual human beings, can do better for these men and women – all it takes is the truth and the bravery to speak it and helping them know that they can safely speak it as well.