Home Economy When is enough “enough?” 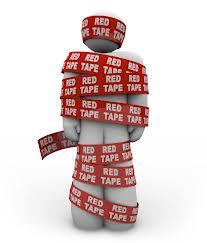 I’m sick and tired of watching and listening to pundits who profess concern over the minimum wage. They all read from the same talking points…”The minimum wage at $7.25/hour is not enough to support a family…and on and on”. Well, what is enough? How about $20/hour? $25/hr? Or why even stop there…why not $50/hr?

In the first place, the minimum wage is so bogus it defies reasonable thought. It is a “vote-getter” for the liberals to bring up before every election, just to show how mean and cruel conservatives really are. 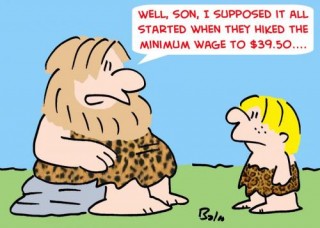 push ever by government regulations (taxes, healthcare, permits, licensing, and other punishment) to kill free enterprise. Yes, the class envy war is being waged against the heart of American entrepreneurial spirit. As in the past, businesses tread water all year with the hopes for a profitable year resting on the Holiday purchasing season.  A very large percentage of the retailers rely on minimum wage personnel so they can be competitive. So according to the logic used by liberals, let’s raise the minimum wage killing off even more business and putting more people on the unemployment rolls.

Now before everyone has a hissy-fit about how cruel and inhumane my line of thinking is, lets analyze the minimum wage in a serious manner and not on touchy-feely, warm and fuzzy, “make me feel good because I am so concerned” reasoning.

The minimum wage is $7.25/hour. At this rate it enables first-time job seekers and other entry-level personnel an opportunity to gain employment and allows small businesses to compete in the marketplace. Remember, small business (there are about 6.79 million small businesses) accounts for 80% of the total employment. But many of these small businesses are not exactly thriving. Nearly four in five businesses have no employees at all, and they make an average $45,000 per year, according to the U.S. Census Bureau. Meanwhile, the share of new startups that employ workers continues to fall, according to the Kauffman Index of Entrepreneurial Activity.

Small business account for about 65% of all employment in the US over the last 17 years, and 52% are employed by businesses that have 20 or less employees. Every time the minimum wage rate is raised, business is discouraged from hiring people. As it is 5.2% of the workforce is paid at minimum wage.

According to the Nevada Sun newspaper…In her column last week on the minimum wage, “Working poor shouldn’t be forced to live on “$15,000 per year,” said Rep. Lynn Woolsey, D-Calif., but that fails to include the earned income credit, the additional child credit and public assistance when she talks about getting by on a minimum wage, all of which can double someone’s income. This bit of public support is far superior to those of us working and paying taxes than just handing out welfare checks while folks kick back on their porches.

The minimum wage is meant as “entry level” minimum pay. It was never intended to be the pinnacle job achievement, which the liberals seem intent on establishing. Very few workers who start at minimum wage remain on it. Most move into better paying positions either at the current company or at a newer company. The minimum wage level prepares many who do not have an education to learn a specific skill.  Yes, even in menial jobs, those learned skills might be limited to learning how to show up to work on time, order taking, or other skills and disciplines required for better paying jobs.

To increase the minimum wage will serve to eliminate many starting jobs because of added business costs and the increased use of automation. The last thing we need now is fewer jobs.

As a conservative I have worked at minimum wage when it was $3.25 per hour during summer when I was in school. I was happy to be able to make money back then, never expecting to do manual labor day-in and day-out hauling construction lumber on the job site. It was a start and I was proud to show that job when I put together my first resume.  So when people call me heartless regarding the minimum wage..I’ve lived it and moved on.

It seems to be those clamoring for a minimum labor rate providing enough money on which to live comfortably, need to be hit in the head with a 4 X 4. Students going to school, many retired individuals, and those just out of prison need work to supplement retirement, or as a foundation before moving upward. For those who dropped out of school, decided drugs and substance abuse was better than learning a skill or moving on to higher education and those who haven’t cut the umbilical cord and are mooching off their parents, why should the income of those hard working mainstream Americans be redistributed as a reward for bad choices made on life’s highway?

It is one thing for those feel-good liberals to talk about an increased minimum wage, but is $10.00/hour any more 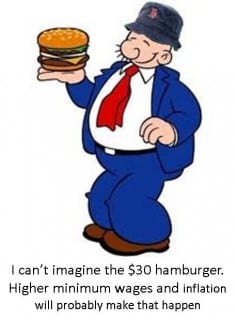 compassionate than $7.25? So why not shoot for $20/hour and maybe that would satisfy them?  But what would that do for the rest of us who paid our taxes and live off what we earn?

Let’s take the fast food franchise business…you know… Burger King, Dominos, and others, to see how that would affect the cost of the food they serve.  Restaurants traditionally experience a labor expense of between 25-38%, meaning for every dollar in sales, 25-38% of the revenue generated goes toward paying the labor cost to deliver the food.  Let’s use 38% and cover the cost of payroll taxes as well and address the cheapie hamburger selling for $1.50 with the minimum wage at $7.25.

Now let’s increase the minimum wage to $10/hr, as has been suggested by many on the left. That’s about a 35% increase in the cost of labor (not including the 2013 tax Armageddon small business will be experiencing beginning in January 2013 which increases the employers tax contribution and exposure to Obamabcare). That means the cost of the $1.50 hamburger would have to be raised to $2.02 to offset the increased labor cost. The Double Whopper Meal at $5.49 would now cost $7.40.  A Dominos 3-topping takeout pizza would rise from $7.99 to $10.78.

How many fewer hamburgers and pizzas would be sold since most of the rest of use hard working tax payers are stuck in the stagnant economy which has already seen our annual incomes drop by $4500 annually Do you suppose the American public would purchase the same numbers of burgers and pizza or would they buy less? Would the franchise food place need as many workers with fewer sales or less workers?

This example can be applied to every small business, but very few Americans understand how a business operates. Most go to work, come home, watch reality television, and pick-up their paycheck at the end of the week. Little do they know or understand the cost of doing business and the effect government regulation already has on small business which is anything but helping American get back to work. Most have no idea what “regulations” mean.

To mention a few:

Right now, there are roughly 170,000 federal business regulations currently on the books, many going beyond local regulations. Written in fine print, single-spaced and double-columned, they fill about 150,000 pages of text. In 2008 alone, regulations cost the U.S. economy $1.75 trillion, according to a report from the Small Business Administration. That’s equal to a whopping 14 percent of the nation’s gross domestic product. Add that to the nation’s tax burden, and it’s easy to see how the federal government is stifling businesses, undermining employment growth and handicapping America’s global competitiveness.

Surely, not all of Washington’s regulations can be said to improve workplace safety or public health. Unaccountable bureaucrats continue to establish new hurdles for business owners  to jump through without regard for the costs imposed. Managers get buried under paperwork that often provides little to no value to their workforces or the public, with the average small businesses suffering the most. The average firm with fewer than 20 employees faces regulatory costs 42 percent higher than businesses with up to 500 employees. The average regulatory compliance costs for each employee of a small business now exceed $10,000 per year, according to the SBA report.

The American electorate voted for four more years of PAIN, because most do not understand the plight of those doing the hiring…small business. When they mentioned the burden of government with its regulation and taxes, the class warfare gang said in the loudest of voices that could be trumpeted through the administration …YEAH!!! Punish those suckers! Little did the populace realize they are killing what is needed to save America and its jobs.

So now let’s go after the rest of the businesses which provide jobs…Walmart, K-Mart, Target, Best Buy, and others on this Black Friday shopping season. How many of the workers in these businesses are being FORCED TO WORK THERE? If they don’t like working at these places, by all means go find work elsewhere. So I say…Let employee-agitators demand more pay when 20 million are out of work. Let them demand union participation after having just driven Hostess Cupcakes out of business (18,000 jobs lost), and let’s invest more money we borrow from China on Government boondoggles like Solyndra.

Enough is enough. I say let these companies fire all those who walkout on Black Friday and open the door to the millions who would be thankful for an opportunity to work. Yes, at $7.25 an hour it’s not much, but with a little real government help which could include the earned income credit, the child tax credit and, if needed, a little public assistance with food stamps, there will be a line waiting for those valuable jobs!