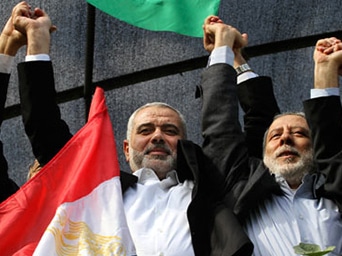 First, the courage and resilience of the Palestinians in Gaza has won the hearts and minds of the world. In Stephen Lendman’s words, “we’re all Gazans now”.

The Hamas government, which has been forced to operate under impossible conditions ever since it was elected in 2006, earns grudging admiration and can hold its head high. Hated in the West because they are not for sale, Hamas should be accepted as a key player in the diplomatic process from now on.

Israel comes out of it smelling even worse than before and is now universally despised. It has shown itself to be the ultimate terror state and should be booted out of the United Nations.

The quisling Abbas, who skulked in the shadows and whose diplomatic machinery in the capitals of the world remained silent during the slaughter, ought to accept the revolver on the silver tray. He has no democratic legitimacy, no popular mandate. He’s finished.

The West’s leaders, from Obama, Clinton, Cameron and Hague down, who support the Zionist psychopaths, promote their vile purpose, reward their non-stop atrocities and even lie their heads off to defend them, are exposed for what they are – enemies of peace and unfit to serve in the governments of decent people.

For the benefit of those who prattle about terror killings, here is the score. In the 12 years since the first Intifada (September 2000) up to the end of September 2012 Israel killed 6,550 Palestinians in their homeland. Of these 1,335 were children. Over the same period Palestinians killed 590 Israelis in their homeland, including 85 children. This is a kill-ratio of 11 to 1. When it comes the children the Israelis are even more proficient achieving a kill-ratio of nearly 16 to 1. The figures, which now need updating to include the latest slaughter, come from the Israeli human rights organisation B’Tselem which keeps count of such things.

No national leader worth his salt would tolerate his countrymen being unlawfully reduced in this way. The West perhaps is beginning to realise that Gaza too has a right to defend itself, and that right is non-negotiable.

Will Mr Obama, Ms Clinton, Mr Cameron and Mr Hague continue to pledge undying support for a regime capable of such butchery? I expect the answer to be ‘yes’ because these statistics aren’t new, the shutters should have come down on those responsible years ago. This quartet’s determination to perpetuate the cruel occupation when they could end it with a snap of the fingers means they are probably beyond redemption.

All these things and many more combine to turn the tide. One can sense that civil society across the globe is disgusted with Israel’s crimes against humanity and disrespect for the religious heritage of the Holy Land.

Who are the terrorists now?

Inappropriate use of the T-word by people with sinister motives is one of the biggest obstacles to a just solution. Why does Britain blindly accept America’s branding of Hamas as a terrorist organization? As John Pilger and others have pointed out, Hamas is the Arab world’s only democratically elected government and draws its popularity from its resistance to the Palestinians’ oppressor and tormentor of 64 years.

There’s nothing wrong with the definition of terrorism in GW Bush’s Executive Order 13224, Section 3 –

http://www.treas.gov/offices/enforcement/ofac/programs/terror/terror.pdf – which the US uses to outlaw and crush any individual, organisation or nation that gets in its way. The joke is that it fits the US itself, and its special buddy Israel, like a glove. And they can’t see it.

But it would be difficult objectively to classify Hamas as a terror government given decades of brutal occupation, dispossession, economic suffocation, ethnic cleansing and denial of human rights at the hands of a lawless neighbour. The correct word for them is “guerrilla”, as General Sir Mike Jackson said last Sunday.

When democratically elected Hamas foiled a CIA coup in 2007, John Pilger noted that the event was (and still is) reported in the western media as “Hamas’s seizure of power”. Furthermore, Hamas is never described as a government, let alone a democratic one, as it should be. Neither does the West acknowledge Hamas’s generous offer of a ten-year truce and support for a two-state solution, with just one condition: that the Israelis obey international law and end their illegal occupation beyond the 1967 borders.

Added to which Norman Finkelstein, in his book This Time We Went Too Far, says: “In June 2007 Hamas foiled a putsch orchestrated by the US, Israel and elements of the Palestinian Authority. Hamas has been repeatedly accused of ‘seizing control’ when it was correctly taking action to enforce its authority.” [my italics]

Israel tried to justify Operation Cast Lead Mk1, launched in December 2008, by claiming self-defence against rocket attacks but the main motives, says Finkelstein, were to restore Israel’s “deterrence capacity” and counter the threat posed by a new Palestinian “peace offensive”.

Deterrence capacity is about “keeping Arabs so intimidated that they could not even conceive of challenging Israel’s freedom to carry on as it pleased, however ruthlessly and recklessly”. The 1967 war had been unleashed for that same purpose.

He explains how Hamas’s readiness to accept a two-state solution (on the internationally recognised pre-1967 borders) and the June 2008 ceasefire brokered by Egypt together caused Israel a dilemma in view of its aversion to any permanent peace. Foreign minister Tzipi Livni wanted a period of calm but said any extended truce “harms the Israeli strategic goal, empowers Hamas, and gives the impression that Israel recognises the movement”. Israel’s strategic goal, of course, was (and still is) to retain the valuable parts of the West Bank by making the occupation permanent. Israel therefore would need to provoke Hamas into resuming its attacks “then radicalise or destroy it, thereby eliminating it as a legitimate negotiating partner”.

Let’s keep that in mind in the weeks and months ahead. Israel won’t want the truce to last too long. And the Zionist regime’s strategic goal won’t have changed. Hamas are in the way ánd must be crushed. So we can expect the Israeli offensive to continue, perhaps by other means at first.

Furthermore, Israel is neurotic on the question of its own legitimacy and insists that Hamas acknowledge the Jewish state’s right to exist. This is comical considering the manner in which it came into being and the arm-twisting by the US to push the 1947 partition plan through the UN. Up till then Britain, which undertook the mandated responsibility for Palestine, had promised a Jewish homeland “within” Palestine, with all Jews living there as Palestinian citizens.

The question whether the UN acted lawfully in giving away 56% of another people’s lands to racist interests that owned only 7% will continue to be asked. Furthermore Israel today refuses to define its borders, so the question for Hamas (and everyone else) is: what exactly are we supposed acknowledge or recognise even if we were in the mood to do so? Israel has expanded its 56% to 78% by land-grab and ethnic cleansing. Its snaking separation wall annexes even more.

So the incessant bleating for everyone to recognise its ‘right to exist’ is seen by many as a fraudulent way of claiming legitimacy on whatever borders Israel’s brutal military can push to. If Hamas buckle they’ll ‘legitimise’ and sign away all of Israel’s territorial gains at the Palestinians’ expense – past, present and future. But Hamas, says Finkelstein, “draws a very clear distinction between Israel’s right to exist, which it consistently denies, and the fact of its existence, and it has stated explicitly that it accepts the existence of Israel as a fait accompli…”

In the meantime, where is Israel’s recognition of the Palestinians’ right to exist in their homeland and their right to self-determination?

We wait to see if the international community at long last ensures that Gaza can rebuild, restore public health, enjoy a modicum of normal life and trade freely with the outside world.