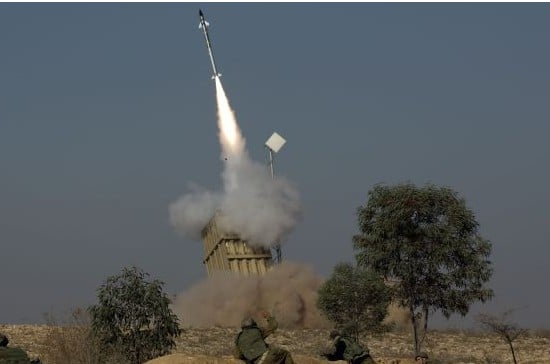 The Israeli military launch a missile from the Iron Dome missile shield in the southern city of Beer Sheva into the Gaza Strip on November 15, 2012.
—
Related Interviews:
Related Viewpoints:

The Israeli regime is set to test-fire a new missile shield developed by US company Raytheon after its Iron Dome missile system failed to intercept hundreds of rockets and missiles fired from Gaza.

Israel has turned to engineers from the American company to help the regime develop the next-generation missile shield called the Stunner.

According to Boston Globe newspaper, the new missile interceptor is scheduled to be test-fired in “Negev Desert in coming days.”

If the system proves viable, Tel Aviv will add the system to its missile shield, known as David’s Sling, which is designed to complement Iron Dome.

“They are working hard to get David’s Sling operational. The hope is it will be able to knock out a variety of targets,” said Theodore A. Postol, professor of science, technology, and national security policy at the Massachusetts Institute of Technology and former adviser to the US Navy.

Israel developed the Iron Dome with a 200-million-dollar fund from the United States. The US plans to give Tel Aviv another $600 million for additional batteries and replacement missiles.

The US will also help finance the Stunner project if it proves viable. The Israeli firm Rafael has spent a total of $130 million over the past three years to complete the system.

The new interceptor missile system “is designed to intercept a variety of short-range ballistic missiles, large caliber rockets and cruise missiles,” Raytheon said in a statement.

The report added that Tel Aviv is also working with the giant American aerospace corporation, Boeing, on another missile shield known as Arrow 3, designed to intercept missiles that can travel hundreds, even thousands of miles.

The landing of Hamas rockets in Israeli cities has raised serious questions on how the Israeli regime would protect itself in case of other retaliatory strikes.

An Egypt-mediated ceasefire agreement on Wednesday ended eight days of Israeli attacks on the besieged Gaza Strip that killed more than 160 Palestinians and injured about 1,200 others.

The Iron Dome missile shield intercepted about 420 out of some 1,500 rockets fired by the Palestinian resistance fighters into the Israeli cities.

The resistance fighters incessantly fired rockets and missiles into the occupied lands during the eight-day Israeli war on Gaza, killing at least five Israelis, in retaliation for the fatal attacks on the besieged Palestinian territory.